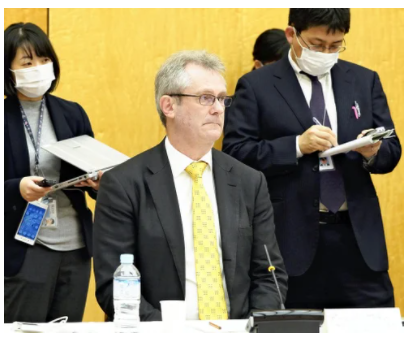 David Atkinson attends a meeting of the Growth Strategy Council at the Prime Minister’s Office in the afternoon of Dec. 1. (Photo by Masanori Genko)

Much attention has been given to the relationship between David Atkinson, a member of the government’s Growth Strategy Council, and Prime Minister Yoshihide Suga. The prime minister implemented a tourism strategy based on advice from Atkinson, who is considered to be one of the brains behind Suga, when he was chief cabinet secretary. Suga and Atkinson also share common views on the reorganization of small and medium-sized companies, alarming economic circles and the Liberal Democratic Party (LDP).

During a meeting of the Growth Strategy Council held at the Prime Minister’s Office [Kantei] on Dec. 1, Prime Minister Suga said, “We’ll bolster support to solidify the foundations of smaller firms,” expressing his intention to improve the productivity of smaller companies through tax systems and subsidies.

During the meeting, which was the council’s fifth gathering, Atkinson insisted, “The lower productivity of smaller firms compared to big companies is attributable to Japan’s low productivity.” But Akio Mimura, chairman of the Japan Chamber of Commerce and Industry, objected, saying, “Low productivity is an issue facing the entire Japanese economy, including large companies.” Atkinson and Mimura often clash during the council meetings.

Atkinson, who is originally from the U.K., worked as an analyst and is currently serving as president of a company specializing in restoring Japan’s national treasures [and important cultural properties]. Suga eased the conditions for issuing visas based on advice from Atkinson, who is well versed in tourism strategies and, as a result, was able to increase the number of foreign visitors to Japan 3.8-fold in seven years when he was chief cabinet secretary.

According to a government source, the prime minister chose Atkinson as a member of the council. Atkinson insisted in his book that “smaller companies should be halved in number.” A middle-ranking LDP member expresses his concern: “Small and medium-sized enterprises support the Japanese economy. It is only natural for them to oppose the idea that they should be reorganized because of low productivity.” Suga, who is considering reorganizing smaller firms, is poised to find the “sweet spot” by balancing public opinion and the reactions of the business community.