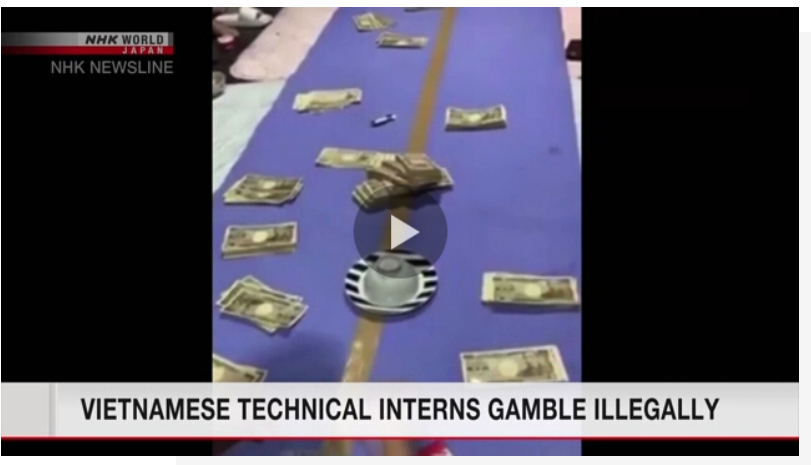 NHK has learned that Vietnamese technical trainees in Japan and other people are being deceived into taking part in illegal gambling.

Police are on heightened alert. Groups supporting foreign technical trainees are also warning them against taking part in suspicious gatherings.

Footage obtained by NHK shows people engaged in the Vietnamese gambling game called Xoc Dia. It was filmed in an apartment room in Aichi Prefecture this summer.

The video shows participants betting 10,000-yen bills at the call of the session organizer. Ten-thousand yen is worth roughly 96 dollars.

Sources say up to about 100 people get together for such a gambling session and that places of gatherings often change for fear of police crackdowns.

The sources say participants are invited through social media.

They add many technical trainees who lost their jobs due to the coronavirus pandemic are tricked into believing that they can easily win money.

A Vietnamese technical trainee who participated in such gambling admitted he knew it was illegal in Japan.

But the trainee said he took part to make money as he had spent all his savings because of the pandemic and had been unable to send money to his family in Vietnam.

He added he now regrets what he did as his debt has grown further.

The trainee said the group organizing the gambling was like a mafia involved in various crimes. He said it was also mediating money-laundering.

Illegal gambling of this sort is believed to be spreading in Japan.

In October, a Vietnamese man was arrested on suspicion of cutting a finger of a gambling customer in Osaka over his debt.