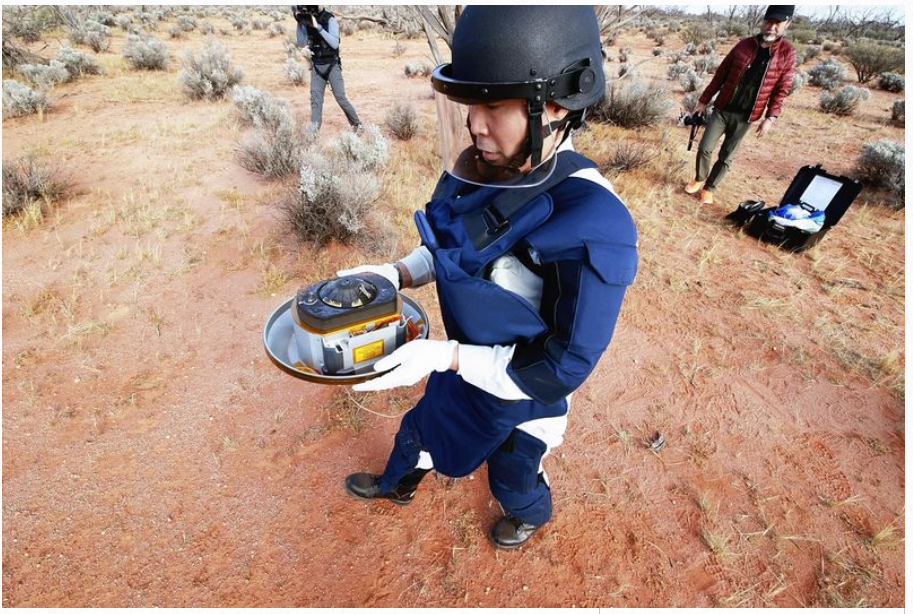 Courtesy of JAXA / A JAXA team member retrieves a capsule detached from Hayabusa2 in Woomera, southern Australia, on Sunday.

JAXA’s Hayabusa2 spacecraft ejected a reentry capsule, thought to contain samples from inside the asteroid Ryugu, and a dispatched team collected it from the outback in Woomera, South Australia, early Sunday.

The team including members of the Japan Aerospace Exploration Agency located the capsule at 4:47 a.m. Sunday and recovered it about three hours later.

The capsule separated from the main body of the spacecraft at 2:30 p.m. Saturday at a distance of 220,000 kilometers from Earth and approached the atmosphere at a speed of 43,200 kph. The recovery team confirmed the capsule moving as a bright fireball after its reentry into the atmosphere at about 2:30 a.m. Sunday.

The team then searched for the capsule based on clues such as radio signals emitted. Once the location was identified, after dawn, it proceeded with the recovery operation.

The team will bring the capsule back to Japan to confirm whether samples have been successfully retrieved.

Hayabusa2, which left Earth in December 2014, arrived at Ryugu in June 2018. The spacecraft successfully landed on the surface of the asteroid twice, in February and July 2019.

After its work probing the asteroid ended, Hayabusa2 left Ryugu in November last year, heading back toward Earth. Its six-year odyssey so far has covered more than 5.2 billion kilometers.

The main body of Hayabusa2 fired its engines three times from 3:30 p.m. Saturday and successfully altered its orbit to head to its next destination, the asteroid 1998KY26, which orbits between Earth and Mars. It is expected to take 11 years for Hayabusa2 to arrive at the asteroid.