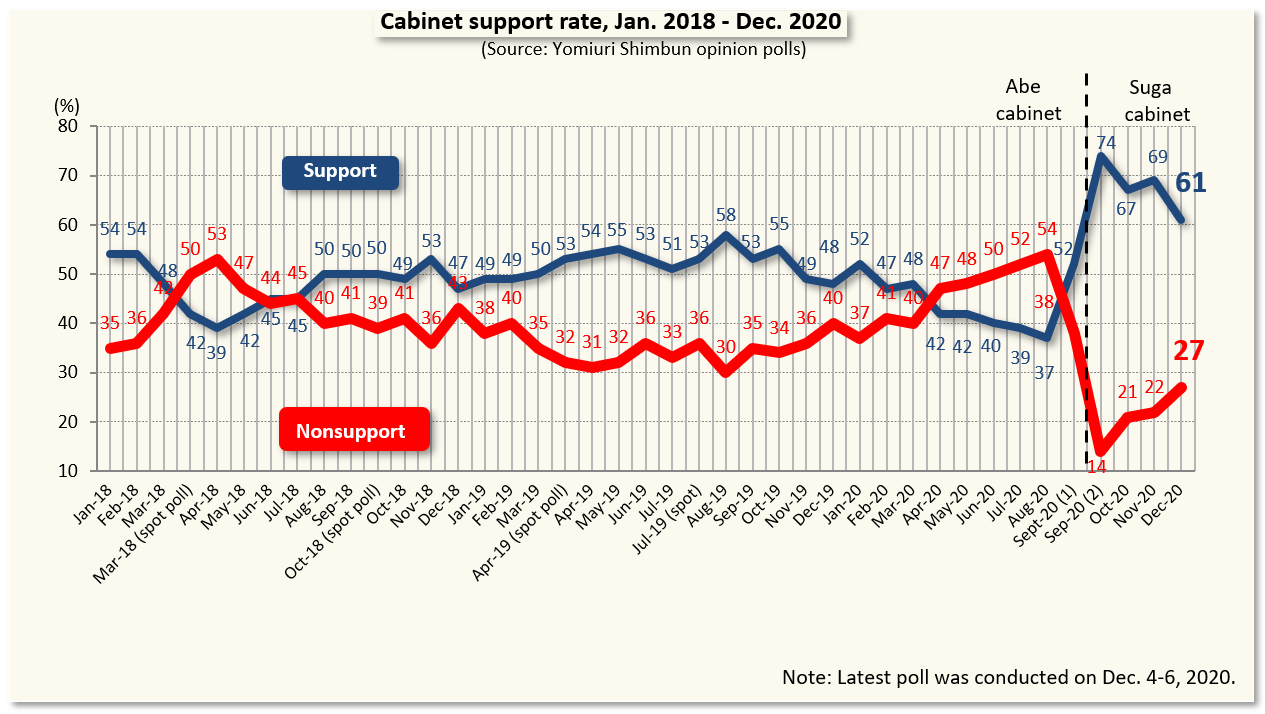 The approval rating for Prime Minister Yoshihide Suga’s Cabinet has fallen by 8 percentage points to 61% from the previous month, while the disapproval rating has risen by 5 points to 27%, apparently influenced by a sharp increase in the number of people infected with the novel coronavirus, a nationwide poll conducted by The Yomiuri Shimbun between Friday and Sunday showed.

About 49% of respondents said the government’s overall handling of the coronavirus is unfavorable, up 10 percentage points from the previous poll taken between Nov. 6-8, while 42% of them viewed it favorably, down 14 percentage points.

The poll also found that 67% of respondents said that former Prime Minister Shinzo Abe’s responsibility is “grave” for his explanation made in the Diet that there were no expenses whatsoever made by his support organization in connection with the allegation that the organization covered part of the expenses for a dinner party it hosted on the eve of cherry-blossom viewing events hosted by Abe.

It also found that 72% of respondents said Abe should explain himself regarding this matter, while 24% said he does not have to do so.

Regarding the effort made by mobile phone operators that have announced their lowered fee plans in response to the government’s request, 50% of respondents said their effort is “insufficient,” while 39% said it is “sufficient.”

In response to a question about people taking trips or visiting relatives in their hometown during the New Year’s period, 75% of respondents said “people should refrain from doing so as there is a danger of spreading infections,” considerably surpassing the 23% who said “there would be no problem as long as people thoroughly take measures to prevent the infection.”

In the poll taken from Aug. 7 to 9, when the country was hit by a second wave of infections, 76% of respondents said people should refrain from making similar visits to hometowns during the Bon Festival holidays, while 22% said there was “no problem” in doing so.

By region, the percentage of respondents who said people should refrain from taking New Year’s trips or visits stands in the 80% range in the Chugoku, Shikoku and Kyushu regions, and in the 70% range for other regions. By age, 65% of respondents 18-39 said so, 72% of respondents 40-59 said likewise, and 85% of respondents 60 and over said so.

Asked about respondents’ fear of becoming infected with the virus and developing serious symptoms by taking trips or making hometown visits during the New Year’s period, 23% said they are worried about it greatly, while 50% said they are to some degree. The combined 70% is almost unchanged from the poll taken in August.

Responses were obtained using the random digit dialing method from 536 of 917 randomly selected households with eligible voters and 538 of 1,194 mobile phone numbers called for a total of 1,074 responses.