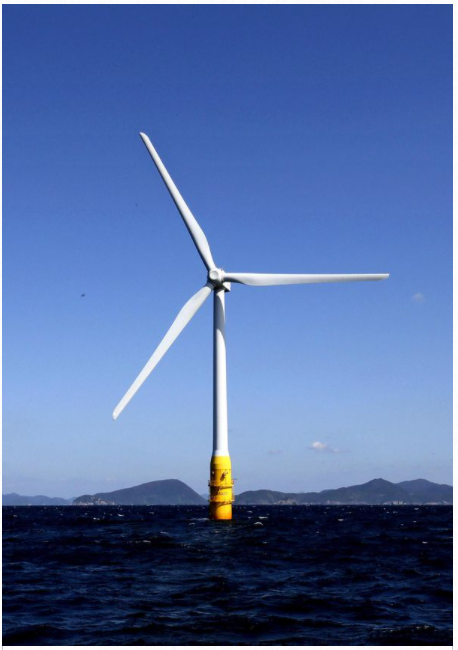 The Yomiuri Shimbun A windmill at an offshore wind farm constructed by Toda Corp. and the Goto municipal government in Goto, Nagasaki Prefecture, is seen on Nov. 6.

The government will introduce a system to monitor the air volume of offshore wind farms and coordinate with local governments to expand offshore wind-power generation, which is expected to play a major role in renewable energy, The Yomiuri Shimbun has learned.

The government aims to increase the capacity of offshore wind-power generation by taking the initiative in the project, instead of leaving the matter to private power producers.

The government plans to compile an action plan by the end of this year to expand offshore wind-power generation. A policy map is expected to show an increase in generation capacity to between 30 gigawatts and 45 gigawatts by 2040. The government had planned to increase the current 20,000 kilowatts to 10 million kilowatts by 2030.

The new “central system” has already been adopted in the Netherlands and some other European countries.

Under this system, the government in a collective manner will study air volume and geological conditions, as well as secure a power transmission network for the stable transmission of generated electricity. Study results will be provided to private companies hoping to enter the market.

To achieve the target of 45 gigawatts, at least 4,000 new power plants will be necessary, assuming that they have the same generation capacity as existing plants.

The government has designated so-called promotion areas of the ocean that can be used for up to 30 years, making it easier for businesses to work with local governments. The latest move is believed to reflect the government’s conclusion of pursuing further measures to promote offshore wind-power generation.