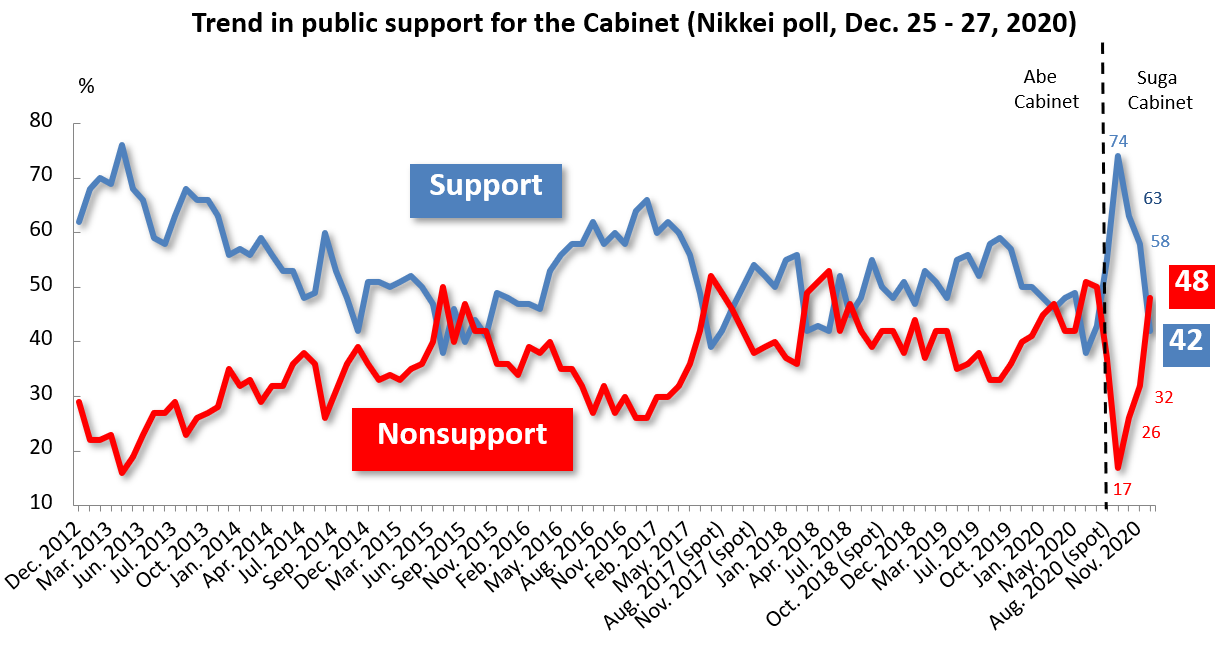 TOKYO — Public support for Japanese Prime Minister Yoshihide Suga’s government has gone underwater for the first time as officials have struggled to respond to COVID-19.

The approval rating of Suga’s cabinet sank to 42% in a weekend Nikkei/TV Tokyo survey — down 16 percentage points from the previous poll, taken in November. Disapproval climbed 16 points to 48%.

The decline in approval was the largest since October 2010, during Naoto Kan’s stint as prime minister. Back then, the government had recently released crewmembers of a Chinese fishing vessel that had collided with vessels of the Japan Coast Guard.

For Suga, the new poll marks a steep drop-off from the 74% approval rating his cabinet enjoyed right after he took office in September. The government’s coronavirus response appears to be the biggest cause of the slide.

The survey shows that 59% of respondents disapprove of the handling of COVID-19, up 11 points from November. The disapproval number is the highest since the coronavirus response question began being asked in February.

Disapproval of the virus response previously peaked at 55% in May, the month after then-Prime Minister Shinzo Abe had declared a state of emergency.

A lack of leadership was the top reason for not supporting Suga’s cabinet, at 48%. This was followed by poor policy measures at 36%.

The confluence of money and politics also factored into the low approval rating. Abe last week denied knowing that his office paid for lavish dinner parties held for his supporters. An aide was eventually fined for failing to record expenses.

Abe’s explanation failed to convince 74% of respondents in the latest poll. Tokyo prosecutors on Friday raided the offices of Takamori Yoshikawa, a former agriculture minister, over allegations of receiving money from an egg production company. The poll shows 82% of respondents do not find the scandal acceptable.

The poll was conducted by Nikkei Research over the phone from Friday to Sunday via random-digit dialing. It received 933 responses from men and women aged 18 and older, for a response rate of 47.4%.