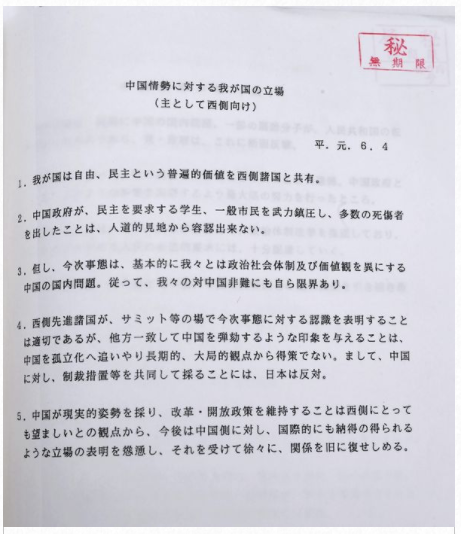 The Yomiuri Shimbun / A document dated June 4, 1989, released by the Foreign Ministry on Wednesday

In the aftermath of the Tiananmen Square incident in China in June 1989, the Japanese government was more concerned with continuing its economic involvement with the world’s most populous country to have it maintain its reform and opening-up policy, than with human rights issues, diplomatic documents released by Japan’s Foreign Ministry revealed Wednesday.

A single-page document titled “Japan’s position on the situation in China,” dated June 4, 1989, the day of the incident, stated that the incident was “unacceptable from a humanitarian standpoint” and pointed out that it was “basically a domestic issue in China, which has a political and social system and values that differ from ours.” It also stipulated that “Japan opposes imposing sanctions [on China] jointly with [Western nations].”

In a briefing document to then Prime Minister Sosuke Uno dated June 22, 1989, regarding Japan’s future policy toward China, it was stated that the challenge was to “reconcile the two conflicting aspects” of “Japan’s values [democracy and human rights]” and “support for China’s reform and opening-up policies from a long-term, broad perspective,” stressing that “the conclusion is to emphasize the long-term, broad perspective.”

In fact, a document titled “the future economic cooperation policy with China,” dated June 21, 1989, asserted that Japan’s economic cooperation had supported “the modernization and opening up of China” and that even with the incident, “there is no reason why [Japan’s cooperative stance toward China] should be changed as long as the general policies of modernization and opening up are maintained.”

In terms of concrete measures, the document said the government will “postpone for the time being” new projects, including the third round of yen loans to China of ¥810 billion, while ongoing projects will “be maintained in principle.” It added, however, that “in the midst of the sanctions imposed on China by the United States and European countries, the Japanese government and companies will refrain as much as possible from performing actions that will be seen as taking advantage of the situation.”

In a memo for then Foreign Minister Hiroshi Mitsuzuka in preparation for the Japan-U.S. foreign ministers’ meeting on June 26, 1989, it was stated that the Japanese government’s position was based on the public’s desire to avoid, by all means, bringing to naught the broad-range Japan-China relations that have been built up over years.

On the other hand, a document dated June 20, 1989, said, “There are special aspects of Japan-China relations that cannot be viewed as equivalent with those of Western countries,” citing “historical relations, including war.” The idea that economic aid to China has the meaning of “postwar reparations” is believed to have been behind the decision.

In the 1989 Tiananmen Square incident, the Chinese government suppressed students and other pro-democracy protesters in the square in Beijing from the evening of June 3 to June 4, deploying tanks and taking other militaristic measures. The Chinese government has announced the death toll at 319, but the actual number is said to be much higher, with some estimates ranging from 1,000 to 3,000.

One of the documents released by the Foreign Ministry on Wednesday also indicated details on how then Prime Minister Uno persuaded an aide of then French President Francois Mitterrand on the wording of a political declaration during the Group of Seven summit in Paris in July 1989.

During a luncheon on July 14, 1989, the opening day of the summit, Uno spoke to Jacques Attali, the French presidential aide in charge of making political declarations in the summit.

According to the transcript of the conversation, Attali said he thinks it is unproductive to say that China should not be isolated. Uno then asked if it would be fine to say that China needs to proceed with reform to not isolate itself, and until then the G7 will watch over the situation.

Attali accepted the proposal, praising it as a clever phrase. As a result, the declaration adopted on July 15, 1989, read, “We look to the Chinese authorities to create conditions which will avoid their isolation and provide for a return to cooperation based upon the resumption of movement towards political and economic reform, and openness.”