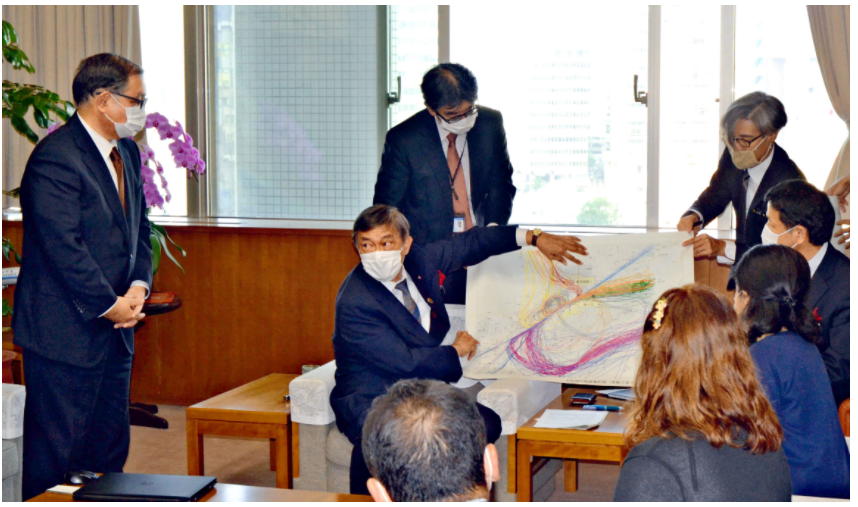 Vice Governor Kiichiro Jahana (second from left) shows the flight paths of U.S. military aircraft to Takehiro Kamiya (far left), director of the Midorigaoaka day care center while calling on the U.S. to improve the situation. (Photo taken at the Okinawa Prefectural Office on Dec. 28.)

On Dec. 28, Vice Governor Kiichiro Jahana indicated his intention to directly ask the U.S. through Okinawa’s representative office in Washington D.C. to review the flight paths of U.S. military aircraft taking off and landing at the U.S. military’s Futenma airfield. Jahana revealed the plan when he met with Takehiro Kamiya, director of the Midorigaoaka Day Care Center, and parents and guardians of children at the center at the prefectural government office that day. Jahana was asked by the group to ban U.S. military aircraft from flying over the center, on which parts from a U.S. military helicopter fell in December 2017.

Jahana showed the results of flight path surveys conducted by the Okinawa Defense Bureau and pointed out that the U.S. military is obviously not honoring the the Futenma airfield traffic patterns agreed between Japan and the U.S. in 2007 or the flight routes passing through Point Kilo and Point Tango in Nakagusuku Village. He underscored that Okinawa needs to directly show [the survey results] to the U.S.

Jahana stressed the need to observe flight routes and avoid flights over schools and the day care center and said: “There is room for discussion on moving (pass-through points). We want to ask for the U.S.’s review [of the flight paths.]”

Kamiya presented a video showing fighter jets and helicopters flying over the day care center at low altitudes. Tomoko Miyagi, who chairs a group called “Team Midorigaoka 1207″ founded by parents and guardians of children at the center, said that although three years have passed since the incident, the center “has been forced to be patient.”