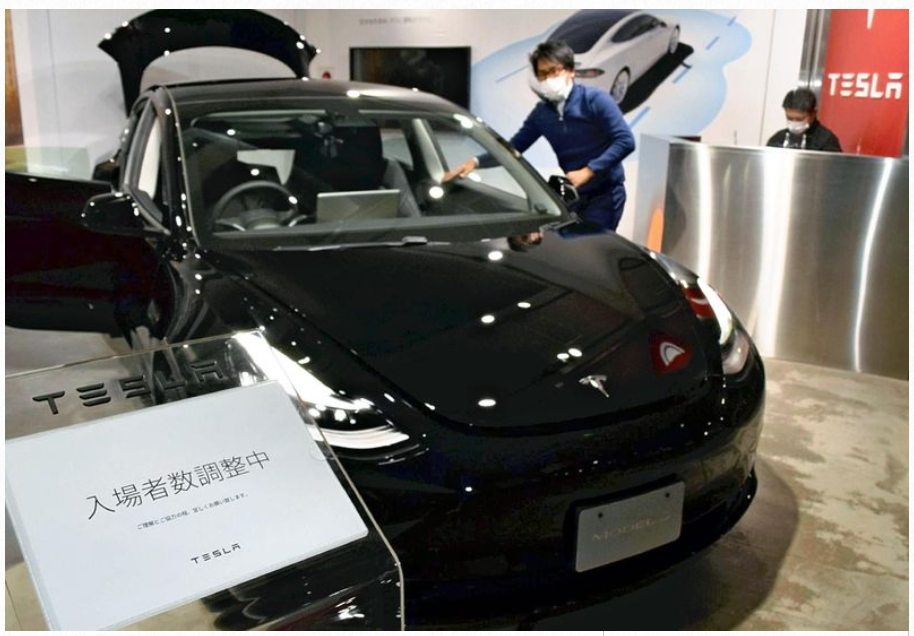 The green growth strategy announced by the government sets a goal for all new vehicles to be electrified by the mid-2030s, pushing automakers to work out measures to meet the call. While European, U.S. and Chinese carmakers have been making strenuous efforts to proliferate electric vehicles, Japanese makers face many challenges as they have been producing hybrid vehicles as their mainstream electrified models.

Car manufacturing is a key industry in Japan, but automobile-related activities account for nearly 20% of carbon dioxide emissions. For government to realize its goal of reducing greenhouse gas emissions to net zero by 2050, automakers have no choice but to step up electrification.

According to the Japan Automobile Manufacturers Association (JAMA), gasoline and diesel cars accounted for a combined 65% of the vehicles sold in Japan in 2019. The government’s idea is to promote gasoline-free cars.

In announcing the green growth strategy, the government said vehicles categorized as electrified vehicles this time include not only vehicles that do not emit CO2 while running, such as electric vehicles and fuel-cell vehicles, but also hybrid vehicles powered by gasoline engines and electric motors and plug-in hybrid vehicles. Hybrid vehicles occupy 34% of Japan’s passenger car market.

Britain and the U.S. state of California, however, have put forth policies for the future banning the sale of any vehicle that uses gasoline, which includes hybrids. Hybrids still emit CO2 and are less environmentally friendly than electric vehicles and such types of cars.

In Japan, hybrids are considered the mainstay eco-friendly vehicle, as Toyota Motor Corp. and other Japanese automakers have taken the lead globally in hybrid technology. While it is a realistic choice for now to recognize hybrid vehicles as electrified, there is concern that over the long run this categorization will become an example of the Galapagos syndrome in which Japanese standards are insular and deviate from international practices.

There are a number of challenges regarding the dissemination of electric vehicles. Their range on a single charge is shorter than that of a gasoline-powered car and it takes at least 30 minutes to fully recharge an electric vehicle. The number of rapid charging facilities is only about 8,000 across the Japan, far fewer than the nation’s 30,000 gas stations. There is also a shortage of charging facilities at condominiums.

Enhancing the performance of batteries is indispensable to extend the vehicles’ range. Rare metals are used to make batteries, so it will become necessary to establish a system of ensuring a stable supply of rare metals from China and African countries. While the development of batteries using other materials is making progress, it will take time before such efforts bear fruit.

The production and charging of electric vehicles requires enormous amounts of electricity and much of Japan’s electricity today is provided by thermal power generation.

“If passenger cars are entirely replaced by electric vehicles, it will require electricity equivalent to the volume generated by 20 thermal power generators,” said Toyota Motor President Akio Toyoda, who is also the current chairman of JAMA, suggesting a complete shift to electric vehicles could run counter to decarbonization.

The government’s electrified vehicles target also applies to mini-vehicles, whose prices and maintenance costs are lower than those of standard and compact cars. This class of vehicle accounts for one-third of Japan’s passenger car market. If prices rise due to electrification, it is possible that customers may shy away from mini-vehicles.

The impact on employment is also feared. The number of parts needed to build an electric vehicle is said to range from about 10,000 to about 20,000, fewer than the about 30,000 required for a gasoline-powered car. There is a view that this will lead to reductions in staffing revolving around auto parts makers.

Japanese carmakers have been fighting uphill battles in the global electric vehicle market.

On a main boulevard in the Minami-Aoyama area of Tokyo, major U.S. electric carmaker Tesla, Inc. has a showroom where it displays its latest sedan, the Model 3. The car has attracted an increasing number of inquiries about test-drives and purchases. Tesla made its Japan debut just about a decade ago and began selling its Model 3 in 2019. It can be purchased at the ¥5 million level, about half the price of a conventional sedan.

Tesla’s strength is that its software for such functions as car navigation and driving assistance is updated online as needed, thereby making it possible to enhance functions continuously. According to British research firm LMC Automotive, Tesla was No. 1 in worldwide electric vehicle sales in 2019, with its 370,000 units sold far surpassing the numbers recorded by its competitors.

Chinese makers have also been gathering momentum in electric vehicle production. BAIC Motor Co. was No. 2 on the global list, followed by BYD Auto Co. at No. 3. The tripartite alliance of Nissan Motor Corp., Mitsubishi Motors Corp. and Renault S.A. of France stood at No. 4. Honda Motor Corp. and Toyota Motor Corp. fall far short of ranking in even the top 20 of electric vehicle makers.