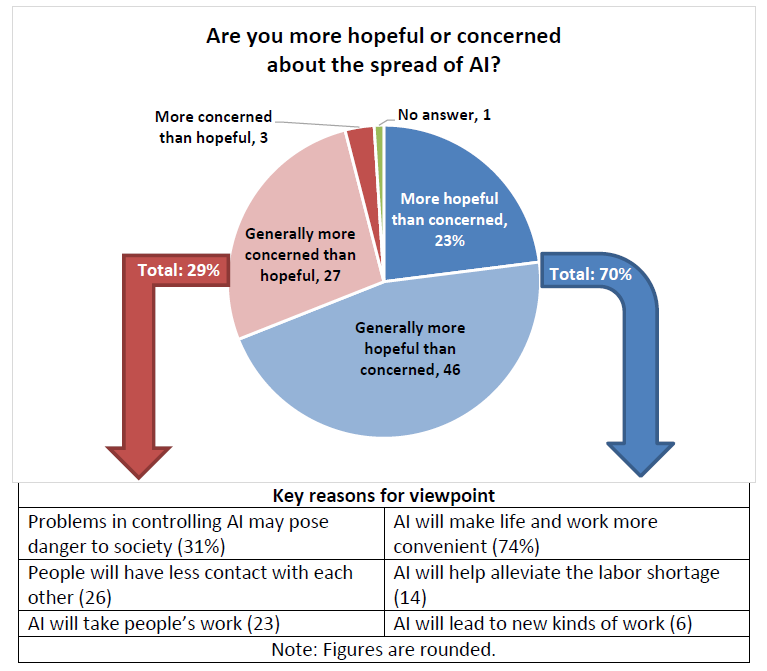 In the recent Nihon Yoron Chosakai nationwide mail-in poll on artificial intelligence (AI) and the Internet society, a total of 70% of respondents said that their hopes about the increased use of products and services that harness AI either “greatly” or “generally” outweigh their concerns. This figure easily exceeds the 29% who said their concerns about AI either “greatly” or “generally” outweigh their hopes. The survey was conducted in November and December last year. Some 74% of those optimistic about AI said they are hopeful because AI will “bring greater convenience to people’s lives and work.” Another 14% said that AI “will help alleviate the labor shortage.” (Abridged)

[Polling methodology: A total of 3,000 men and women aged 18 or over were randomly selected nationwide from 250 locations on a stratified two-stage random-sampling basis to create a cross-section of Japan’s slightly more than 100 million voters. Survey questionnaires were sent by postal service to pollees on Nov. 9, and 1,981 completed questionnaires were return by Dec. 16, 2020. Excluding those questionnaires that were completed incorrectly or by someone other than the intended person, valid responses were received from 1,933 people for a valid response rate of 64.4%. The makeup of the polling sample was as follows: male, 49.6%; female, 50.4%. Sections of Fukushima Prefecture were excluded from the survey pool.

METI to include hydrogen and ammonia promotion in clean energy strategy