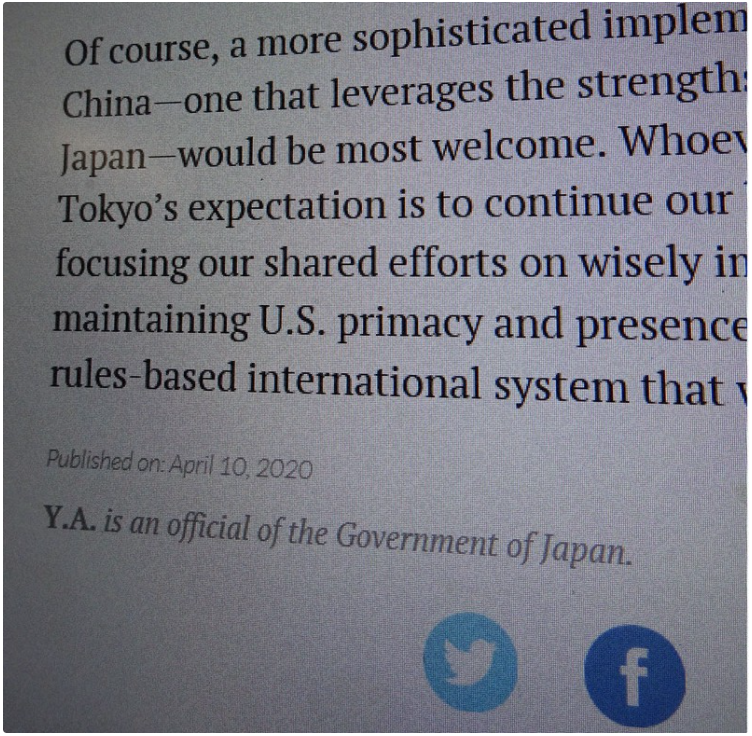 At the end of the article, it says, “Y.A. is an official of the Government of Japan.” (Photo from the online edition of the foreign policy magazine The American Interest.”)

In April last year, the release of an article believed to have been written by a Japanese diplomat who went by the initials Y.A. caused a stir within diplomatic circles in Japan and the U.S. The article said, “The U.S. administration of President Donald Trump is better than that of President Barack Obama in that the former has the right China strategy while the latter’s was ambiguous,” hinting at a desire for Trump’s re-election in the U.S. presidential race. Though the article was published anonymously, it would be unusual for an incumbent bureaucrat to have written such a piece. How does the author view the victory of Joe Biden, who served as vice president under the Obama administration and was involved in U.S. diplomacy with China? And who is Y.A.?

The article appeared in the online edition of the U.S. foreign policy magazine “The American Interest” in April, when coronavirus infections were continuing to spread. It was written by Y.A., a Japanese government bureaucrat, and titled, “The Virtues of a Confrontational China Strategy.” It came to be called “Y.A. article.”

The foundation of Japan’s diplomacy is the Japan-U.S. alliance. But questions are being raised about how Japan should engage with China, another superpower. The Y.A. article criticized the Obama administration’s diplomacy, particularly its China strategy. The article underscores that “many Japanese policymakers despaired of the Obama administration’s China strategy.” It also points out that President Obama prioritized anti-climate change measures and other global issues advocated by liberals and to win cooperation from China on these issues, Obama allowed Beijing’s maritime expansion, including the establishment of a military stronghold in the South China Sea and the dispatch of government vessels to the Senkaku Islands in Okinawa Prefecture.

Regarding the Trump administration, the article indicated a degree of approval, saying Trump is the “leader who recognizes the danger (of China)” that Japan has sought since the end of the Cold War. The article also says, “The Trump administration’s confrontational policy with China caused confusion” but the writer insists that a hardline stance toward China is more important by saying, “An alliance focused on China is better than a vague alliance that avoids confrontation.” This can be interpreted to mean the author wants Trump, not Biden, to be elected as president based on Trump’s attitude toward China. The article touches on “the closest relationship in the world” established by Trump and former Japanese Prime Minister Shinzo Abe. It says the Trump administration’s adoption of Abe’s “free and open Indo-Pacific” initiative enabled Japan to “participate in decision-making for Indo-Pacific strategy” for the first time in history.

“The article is dangerous because it would aggravate hostility” vs. “The article conveyed Japan’s concern”

In response to the Y.A. article, Toshihiro Nakayama, a professor at Keio University and an expert on U.S. politics and diplomacy, presented a counterargument in The American Interest in June last year and drew further attention both in Japan and the U.S. Nakayama admitted that the Y.A. article speaks for some Japanese diplomats but pointed out, “Policies intended to add fuel to the confrontation between the U.S. and China are dangerous.” Nakayama explains that Trump had no long-term diplomatic strategy in the first place and that Democrats and Republicans share a hardline policy toward China.

Nakayama also criticized the Trump administration’s “America First” policy for overlooking a decline in U.S. involvement in the international community, a decline in global affairs like that of the Obama administration, which declared that “the U.S. is not the world’s policeman.” This argument met approval with members of the Democratic Party who were displeased by the Y.A. article.

Nakayama told the Mainichi Shimbun that he “has no intention to reject the Y.A. article.” Then why did he write the counterargument? He said: “Some Democrats believe Japanese diplomatic authorities are pro-Republican. If they read the Y.A. article, they would get the wrong impression, thinking, “After all, its true.” The article could send the wrong message to Japan. I thought it was necessary to demonstrate that there is a diversity of opinion in Japan.” Nakayama also mentioned the friendly ties former Prime Minister Abe developed with Obama and said, “Regardless of what Japan actually feels, Japan has no choice but to get along with the U.S. president whoever is elected.”

There is also an expert who recognizes the significance of the Y.A. article. Tatsuhiko Yoshizaki, chief economist at the Sojitz Research Institute, says the Y.A. article is “interesting because the author expresses candid opinions.” He also praised the article, saying, “The author is credited for conveying Japan’s concern to experts who will be in charge of Asian affairs under the incoming Democrat-led government.”

Biden clearly stated during his first phone conversation with Prime Minister Yoshihide Suga in November that Article 5 of the Japan-U.S. security treaty, which stipulates the U.S.’s obligation to defend Japan, applies to the Senkaku Islands.  Persons connected to the Ministry of Foreign Affairs (MOFA) explain that Japan did not maneuver behind the scenes to get Biden to make such a statement. But it may be possible that a person related to the Democratic Party who read the Y.A. article advised Biden to comment on the Senkakus in consideration of Japan. Yoshizaki speculates: “I think Mr. or Ms. Y.A. wrote the article for fun, rather than out of a sense of crisis. He or she is probably working at an overseas diplomatic mission and had enough time to write an article because all diplomatic events were canceled due to the coronavirus pandemic.”

A lawmaker of the Liberal Democratic Party (LDP) says, “Everyone knows who the Y.A. is.” MOFA is taking a wait-and-see attitude. A senior official of the ministry says, “The article may not have been written by a MOFA official.” But some people in the ministry say, “Mr. or Ms. Y.A. probably will not be able to climb the bureaucratic ladder any further now that Biden won the election.”

“Are you the Mr. or Ms. Y.A. who penned the article?” The Mainichi Shimbun asked multiple diplomats whose names were mentioned during the process of news gathering. All of them denied they were, saying, “No” or “I don’t know what you are talking about. You’ve got the wrong person.” The identity of Y.A. is still unknown, but he or she may be worried about the future of Japan and the incoming Biden administration.