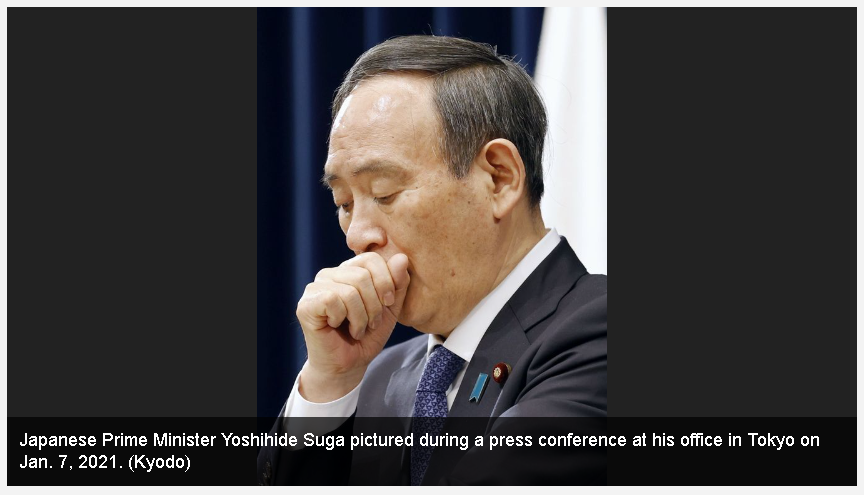 TOKYO — Prime Minister Yoshihide Suga’s declaration of another state of emergency to bring a recent surge of coronavirus infections under control appears to have come too late, with the government’s decision-making process slowed by his prioritization of economic recovery and the manner in which he took office four months ago.

The monthlong state of emergency through Feb. 7, covering Tokyo and three adjacent prefectures, is less comprehensive than the previous one in April last year. The declaration was widely viewed as insufficient to suppress infections, leaving room for a potential extension and an expansion of its scope that will likely have more serious repercussions on the economy.

While Suga has pledged to improve the situation in one month, political observers say such a feat would not be seen as his accomplishment as he has shown little leadership in curbing the surge of infections since November, and whether he can secure a second term as prime minister is becoming increasingly uncertain.

Describing Suga’s response to the resurgence as not fast enough, Yu Uchiyama, a University of Tokyo professor of political science, said, “He may have paid too much attention to the economy.”

“The economy is important, but if the virus spreads, it will damage the economy,” Uchiyama said, adding the government should have carefully listened to medical experts who have repeatedly said it is important to prioritize containing the pandemic.

Suga, who succeeded Shinzo Abe in September, had been reluctant to tighten anti-virus measures. Instead, he pushed his “Go To Travel” subsidy program, denying the need to stop the campaign until the last minute, even as health experts warned of its role in the third wave of infections.

Suga was forced to change course only after he was pressured by Tokyo Gov. Yuriko Koike and her counterparts in Chiba, Kanagawa and Saitama prefectures, who urged the government to immediately declare a state of emergency to allow them to request that restaurants in their areas shorten business hours.

Some other analysts, including Etsushi Tanifuji, a political science professor at Waseda University, believe Suga’s slowness to act stems from his elevation to prime minister through factional politics.

After Abe abruptly stepped down due to health reasons, Suga took over to serve out the remainder of the prime ministerial term by winning the Liberal Democratic Party’s leadership race, with key factions throwing their support behind him.

Tanifuji said Suga, who does not belong to a ruling party faction, is required to take into account the interests of the different groups that back him.

“Mr. Suga needs to constantly make arrangements and achieve a balance between factions, so his decision-making is always slow,” Tanifuji said.

Suga’s decision to halt the travel program, which was backed by the faction led by LDP Secretary General Toshihiro Nikai, from Dec. 28 was also criticized as being too late.

Japan has recently seen a sharp increase in coronavirus infections, with more than 7,500 new cases being reported each day in contrast with three-digit figures before the year-end.

One medical projection states that the country would need around two months to reduce the daily figure to 100 in Tokyo, even if it applies stricter measures.

“In the worst-case scenario, the state of emergency continues until around April, his support rate falls, and the economy slumps,” Iwasaki said.

Other prefectures are also seeking to be covered by the state of emergency.

Media polls in December showed approval ratings for Suga’s Cabinet at around 40 percent — a sharp contrast with over 60 percent at the launch of his Cabinet — and Iwasaki said the ratings are likely to have dropped further.

“We are probably already in the closing days of his government,” the Waseda professor said.

Suga’s term as prime minister runs out in September and the House of Representatives’ term expires in October, meaning he must carefully time when to call a general election if he wants to serve a second term, while the country is preparing to hold the Tokyo Olympics and Paralympics this summer.

“It is possible that he could call an election in spring after the state of emergency is lifted,” Iwasaki said.