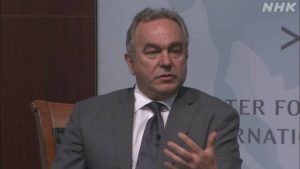 NHK reported at 10 a.m. on Thursday that former Assistant Secretary of State Kurt Campbell, who was in charge of President Obama’s “Pivot to Asia” policy, will assume a senior position to be established within the White House under the incoming Biden administration. According to an announcement by The Asia Group, a strategy advisory firm to which Campbell belongs, the incoming Biden administration will create the senior position of Indo-Pacific coordinator in charge of Asia policy at the National Security Council under the White House, and Campbell will assume the position. The network said Campbell is a well-known Japan hand who was in charge of not only President Obama’s “Pivot to Asia” policy as assistant secretary of state but also Futenma relocation under the Clinton administration as deputy assistant secretary of defense. The network added that the new Indo-Pacific coordinator will aim to unite U.S. allies and friends in preparation for competing with China and lead U.S. policy on China. In addition, the network said Campbell contributed an article to the Jan. 12 issue of a foreign policy magazine in which he warned that the power balance in the Indo-Pacific region is in danger of being disrupted by the rise of China and stressed the importance of developing unmanned fighters and submarines and deploying U.S. forces not only in Japan and South Korea but also in Southeast Asia and the Indian Ocean in order to respond to the PLA.