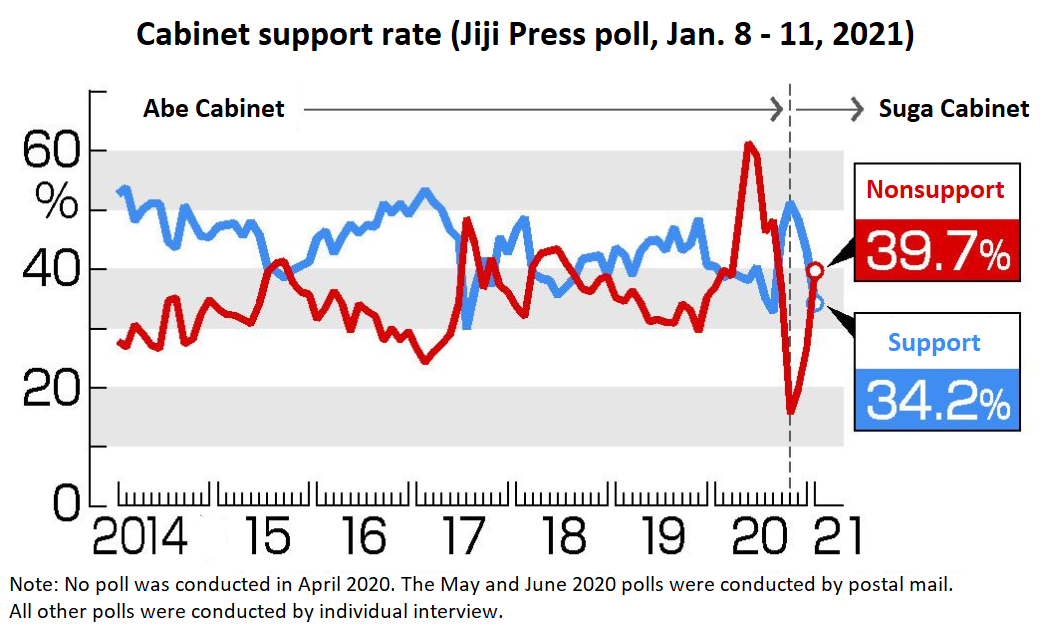 Disapproval topped approval for the first time since the Suga cabinet was launched in September last year.

On reasons for supporting the cabinet, with multiple answers allowed, 16.4 pct said there is no other person than Suga who is suitable as prime minister, 8.0 pct said they trust him and 6.4 pct said they have a good image of him.

Of those who disapproved of the cabinet, 23.5 pct said they cannot expect anything from Suga, 22.6 pct said he lacks good leadership skills and 15.4 pct said they do not trust him.

The survey also showed that 61.4 pct of respondents said they do not regard highly the government’s response to the novel coronavirus epidemic.

The government’s coronavirus response was praised by 18.5 pct of respondents, while 20.1 pct said they cannot tell or do not know.

The survey was conducted for four days through Monday, soon after the government declared a second state of emergency in Tokyo and the neighboring prefectures of Saitama, Chiba and Kanagawa on Jan. 7 amid surges in coronavirus cases.

The support rate stood at 3.1 pct for the main opposition Constitutional Democratic Party of Japan, the lowest level since the party was created in September last year through the merger of the former CDP and the Democratic Party for the People.

The support rate came to 1.7 pct for the Japanese Communist Party, 1.6 pct for Nippon Ishin no Kai (Japan Innovation Party), 0.8 pct for the Social Democratic Party and 0.5 pct for the DPFP.

Reiwa Shinsengumi drew support of 0.2 pct and NHK kara Kokumin wo Mamoru To, which campaigns against the nation’s public broadcaster NHK, or Japan Broadcasting Corp., 0.1 pct.

Respondents who backed no particular party accounted for 62.8 pct.

The interview-based survey covered 1,953 people aged 18 or older in Japan, excluding the prefectures of Toyama, Fukui and Miyazaki due to heavy snow or effects of the coronavirus epidemic. Valid responses were received from 62.0 pct.