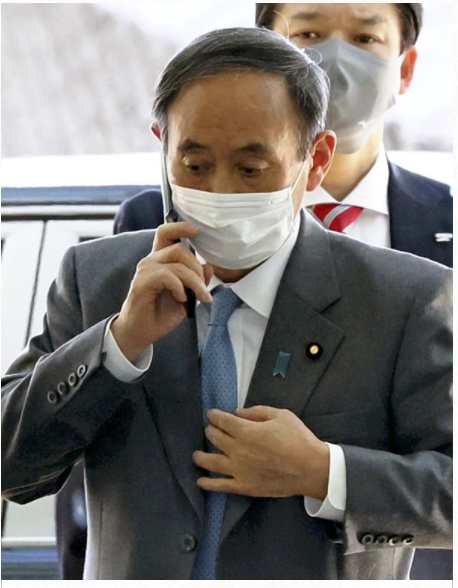 A series of verbal gaffes on important issues has prompted growing concern within the government that Prime Minister Yoshihide Suga is suffering from chronic stress and fatigue.

The beleaguered prime minister spent his New Year holiday on the job, tasked with orchestrating the response to the coronavirus resurgence at year’s end.

Mindful of the official message of social distancing and self-restraint, he has also been forced to abstain from his habitual breakfasts at a Tokyo hotel.

Observers speculated such compounding factors may have been behind the conspicuous slips of tongue.

The trigger for widespread concern came during Suga’s remarks at the government task force on the coronavirus, held on Wednesday. When expanding the state of emergency to include seven additional prefectures including Osaka and Aichi, he misread his notes, erroneously naming “Shizuoka Prefecture” instead of “Fukuoka Prefecture.”

Yet the incident was hardly Suga’s first flub. At an earlier press conference on Jan. 4, when asked about the timing of the dissolution of the House of Representatives, he responded, “at some point in autumn.” His office quickly clarified that the dissolution could in fact be expected “at some point by autumn.”

Those close to the prime minister attributed the gaffes to stress and emphasized that he remains in sound physical health.

Following the announcement of more than 1,300 new coronavirus cases in Tokyo on New Year’s Eve, the first daily total to top 1,000, Suga’s docket was filled with daily meetings with top health officials, including Health, Labor, and Welfare Minister Norihisa Tamura.

Since his days as chief cabinet secretary, Suga has routinely taken his weekday morning meal at a hotel near the Diet building, breaking bread with experts who provide briefings. However, his seat at the breakfast table has remained empty for the past eight days, following the declaration of a state of emergency in Tokyo and three neighboring prefectures on Jan. 7.

Suga was criticized last year for participating in a steak dinner with seven other attendees amid the worsening pandemic. He has refrained from all such dinner meetings since Dec. 17.

Some Liberal Democratic Party members have voiced concern how the inability to dine with experts will affect Suga’s decision-making process. Not only an outlet to relieve stress, cancellation of the meetings may also impede his ability to gather information, a veteran LDP lawmaker said.