NEW YORK/SHANGHAI — After a mob stormed the U.S. Capitol on Jan. 6 in an attempt to overturn his election victory, President-elect Joe Biden maintained that the scenes of chaos “do not reflect true America; do not represent who we are.”

As Asia looks to the first 100 days of Biden’s presidency, beginning Wednesday, many will be wondering who this “true America” is.

The current state of affairs — political violence, the world’s highest COVID-19 death toll, roughly 10 million unemployed — appears a far cry from Biden’s declarations that “America is back” and “ready to lead the world.”

Policy experts agree that Biden’s immediate priorities are all domestic. The president-elect himself has made this clear. He has announced a $1.9 trillion economic rescue package and an ambitious plan to get 100 million Americans vaccinated in his first 100 days. Naturally, his efforts to inoculate the population and heal its political fractures will impact America’s image in Asia and across the globe.

The initial outward steps Biden has promised — reversing Trump’s withdrawals from the Paris climate accord and the World Health Organization on his first day in office — are the lowest-hanging fruit in his quest to again “place America at the head of the table” and avoid ceding leadership to Beijing.

Biden has also pledged to hold a climate summit with leaders of major carbon-emitting nations within 100 days. This comes after Chinese President Xi Jinping stole the spotlight last year when he announced goals of hitting peak emissions by 2030 and carbon neutrality by 2060.

But on China itself — a competition Biden has framed as one of America’s greatest challenges — the president-elect intends to take his time. “I’m not going to make any immediate moves, and the same applies to the tariffs,” he told The New York Times’ Thomas Friedman in December. “I’m not going to prejudice my options.”

Instead, “it’s going to be a major priority for me in the opening weeks of my presidency to try to get us back on the same page with our allies,” Biden said. 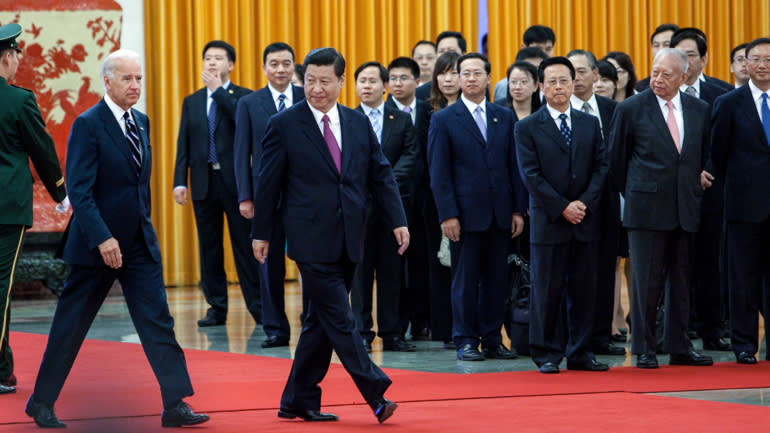 Xi Jinping, China’s vice president at the time, welcomes his counterpart Biden at the Great Hall of the People in Beijing in 2011.   © Getty Images

Reviews of Trump policies are likely to last months. These are expected to cover sensitive issues like Taiwan, including outgoing Secretary of State Mike Pompeo’s abrupt lifting of “self-imposed restrictions” on contact with the self-ruled democracy China claims as its own. Also up for scrutiny will be the flurry of sanctions levied against a range of Chinese companies on national security grounds in Trump’s final days.

But “frankly, the Biden administration doesn’t have the bandwidth or the stability at home to enact major new policy abroad,” said Patrick Cronin, Asia-Pacific security chair at the Hudson Institute, a Washington think tank. “So it’s mostly a stabilizing act for the first 100 days.”

Biden’s priority will be “first to demonstrate there’s a new management in town,” Cronin added. 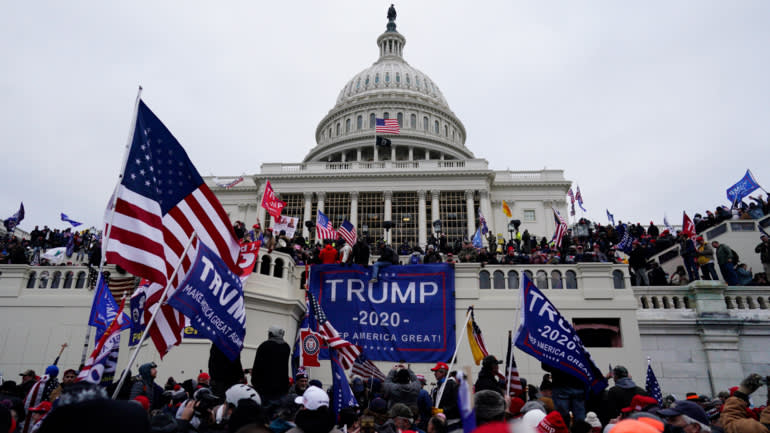 Trump supporters’ attempt to stop congressional certification of Biden’s election earlier this month cast doubt on the president-elect’s claims that “America is back” and “ready to lead the world.”   © EPA/Jiji

On North Korea, Cronin expects Biden will stay open to diplomacy but not rush toward a deal. As for Taiwan, he thinks Biden will seek to uphold U.S. values and interests without unnecessarily antagonizing Beijing.

Many in Taiwan agree, stirring anxiety that relations with the U.S. will retreat and hopes for a free trade deal will be dashed.

Pan Chao-min, a professor at Tunghai University’s Graduate Institute of Political Science, told Nikkei Asia that Taiwan will remain an important part of America’s Asia policy, but not in the way Trump used it to counter China. “The Tsai Ing-wen administration will have to play along with Biden’s policy and [avoid] becoming a ‘troublemaker’ in Biden’s path to rebuilding U.S. credibility in the international community,” the professor said.

Still, Cronin raised the possibility that China could force Biden to choose between looking strong or weak on Taiwan. In that case, “he’ll have to look strong, and that means accepting Trump’s default as the current policy.”

The new president could quickly find himself being tested on either Taiwan or the Korean Peninsula.

A severe crisis over Taiwan was cited as a top-tier conflict concern for the first time in the Council on Foreign Relations’ annual Preventive Priorities Survey, published last Thursday. It was the No. 2 danger to U.S. interests in the region. The first? North Korea’s development of nuclear weapons and ballistic missile testing. 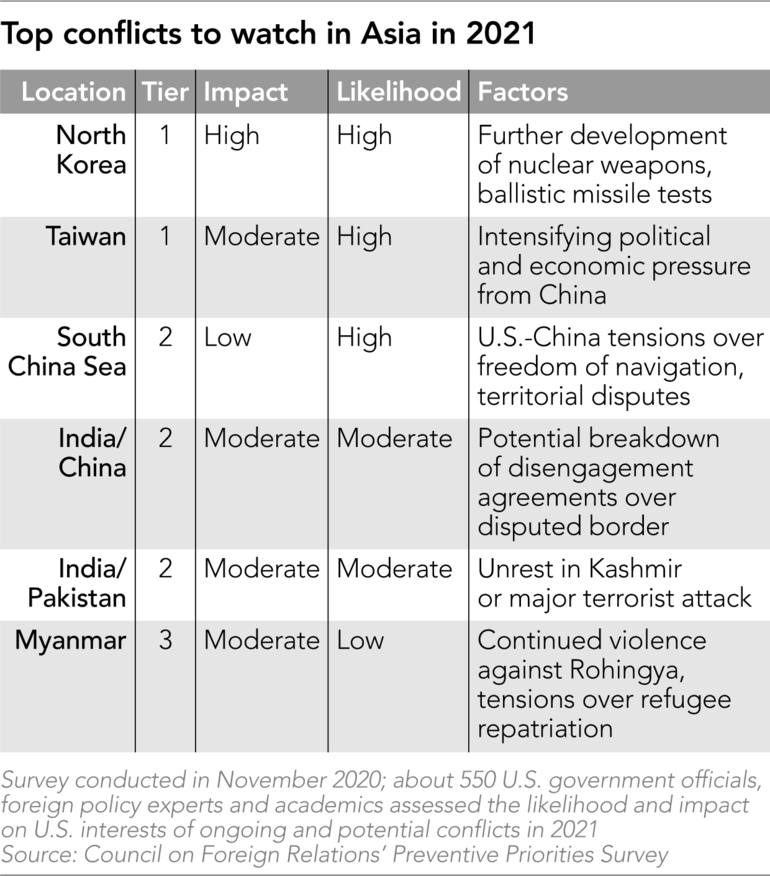 Even if such crises never materialize, Biden will be facing a China that has emerged from the pandemic stronger and bolder.

Having brought COVID-19 ostensibly under control with stringent measures, the country is powering ahead economically, though a flare-up forced millions back into lockdown last week. This year also marks the 100th anniversary of the Chinese Communist Party’s founding, sparking worries over heightened nationalism. And Beijing will not soon forget what it called “unprecedented difficulties” in bilateral relations due to Trump’s tariffs and sanctions.

The past four years have “worked to reshape Chinese thinking about the nature of this relationship,” Wu Xinbo, director of the Center for American Studies at Fudan University, recently told a forum sponsored by the University of Virginia. That will have “a lot of impact on China’s policy behavior in the years to come.”

Wu, a top mainland scholar on America, added that China is likely to “take a more resistant stance toward pressure from the U.S., both politically and diplomatically,” while being “less willing to cooperate.”

Biden does appear to have Asia watchers’ confidence that he is up to the challenge. A survey by the Center for Strategic and International Studies last August found 61% of experts said he was best prepared to deal with China, versus just 18% for Trump. 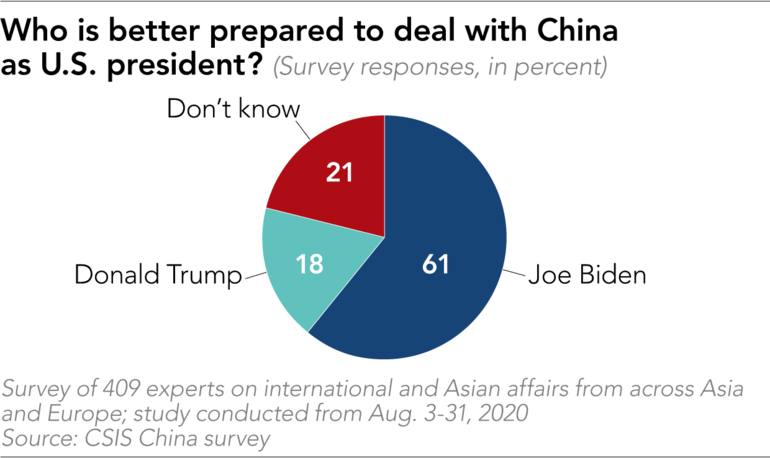 There are also reasons to think Beijing is open to a fresh start.

“China-U.S. relations have come to a new crossroad,” Foreign Minister Wang Yi told state TV in an annual interview on Dec. 31, in which he urged Biden to return to a “sensible approach.”

Despite tit-for-tat tariffs, China’s response to Trump has been restrained in a way that could allow it to “patch up its weaknesses in semiconductors and aviation,” observed Dan Wang, a technology expert at Gavekal Research in Beijing. He and other analysts estimate that China is at least five years behind the U.S. in integrated circuits used in gadgets like smartphones and robots.

While Trump encouraged U.S. companies to shift production away from China, few, especially semiconductor players, have done so because “China is everyone’s largest market,” Wang said.

Xi will be keen on engagement that can fuel high-tech sectors prioritized under his 2035 goals of doubling gross domestic product and joining the ranks of developed economies. His government has already vowed continued reforms and incentives for foreign investment, especially in high-end manufacturing. With regard to sanctions against Chinese tech companies, “I can see a Biden policy accepting some of that but also fine-tuning it in order to create more opportunities for American firms,” said David Dollar, a senior fellow at the Brookings Institution’s John L. Thornton China Center and a former World Bank and U.S. Treasury official. He said the Trump administration’s latest list of companies tied to the Chinese military was “stretching the definition pretty far.”

Another question is whether Biden will reverse Trump’s dismissal of multilateral trade pacts. While Trump pulled out of the original version of the Comprehensive and Progressive Agreement for Trans-Pacific Partnership on day one of his administration, few expect a big trade move by Biden in his first year.

When Biden visits Japan and South Korea, “he will hear from our Asian allies that they would like to see the U.S. get back into Asian trade deals,” Dollar said. Similarly in Europe, “he will be hearing from different allies that the tariffs against China are counterproductive.”

“But it might take a year or more for the Biden administration to get to that point,” he said. Air Force One, the U.S. presidential plane, in the fog: When Biden visits Asia, he will hear from allies “that they would like to see the U.S. get back into Asian trade deals,” one expert said.   © Reuters

A slow start on trade engagement with Asia could have consequences, warned Mireya Solis, director at Brookings’ Center for East Asia Policy Studies, in a column for the Japan Center for Economic Research and Nikkei.

She wrote that the Indo-Pacific “is not waiting for the United States to make a slow comeback.” Most of the region, including China, just signed up for the Regional Comprehensive Economic Partnership — the world’s largest trade pact.

Strengthening old alliances and forging new ones will require economic engagement, according to Harsh V. Pant, head of the strategic studies program at the Observer Research Foundation think tank in New Delhi.

“A lot of it would depend on what kind of an economic alternative Mr. Biden is able to offer,” he said, noting China has been building ties with its Belt and Road Initiative.

“Partners will only join when Washington has clearly articulated what its China policy is going to be,” he said. 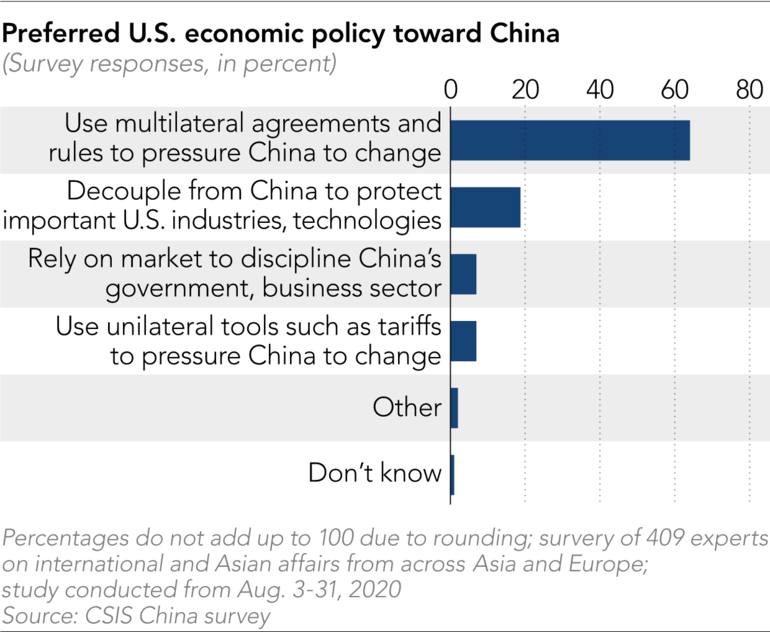 Campbell, the Asia czar, recently offered a glimpse of how the administration might court diverse allies.

“Although the idea that the United States should ‘work with allies’ is almost a cliche, the challenges to doing so are significant,” Campbell and China expert Rush Doshi conceded in a Jan. 12 Foreign Affairs article titled “How America Can Shore Up Asian Order.”

Acknowledging China’s rising military and economic influence, they argued that the U.S. should “pursue bespoke or ad hoc bodies focused on individual problems,” rather than forming “a grand coalition focused on every issue.”

They cited the U.K.’s “D-10” proposal — a club of democratic partners, including the G-7 nations plus Australia, India and South Korea. Indeed, Biden has said he will organize a Summit for Democracy during his first year in office.

But after the Capitol riot, some feel Biden should not wade in too deep too soon.

Richard Haass, president of the Council on Foreign Relations who has served administrations of both parties, advised in Foreign Affairs a day earlier: It “would be wise to put on hold announced plans to convene a meeting of the world’s democracies until the United States’ own house is in better order.”