TOKYO — In his book codifying the Barack Obama administration’s “Pivot to Asia” strategy, Kurt Campbell bemoaned the National Security Council’s overreach into diplomacy. Then assistant secretary of state for East Asian and Pacific affairs, Campbell saw pitfalls in the centralization of foreign policy in the White House and out of the hands of career diplomats.

Five years later, Campbell is set to join the Joe Biden White House as the NSC’s Indo-Pacific coordinator, a new position that has already been dubbed “Asia czar.” Whereas outgoing President Donald Trump left Asia roles unfilled for months, announcing Campbell’s appointment has been seen as a signal of Biden’s commitment to the region.

In Tokyo, Foreign Minister Toshimitsu Motegi applauded the return of familiar faces such as Campbell. “The new U.S. administration’s posture to emphasize the region is welcome,” he said in a Friday briefing. “I feel that [Campbell] and others in the new administration have deep relations with our government.”

But Asia and its ties with the U.S. have changed since the days of the Pivot or “Rebalance,” and the return of Campbell, its architect, raises at least some skepticism.

“It cannot be a return to the past. They seem to think that the Pivot worked when most in Southeast Asia think it didn’t work,” said Bridget Welsh, a researcher at the University of Nottingham Asia Research Institute Malaysia.

While Campbell’s former counterparts in the region praise his professionalism, it is not unusual in Asia for talk of the Pivot to elicit chuckles. Campbell, who left government in 2013, was key to developing the strategy and laying the groundwork for its implementation, which ultimately fell to the Trump administration. Trump’s decision to withdraw from the Trans-Pacific Partnership trade pact was an early sign to Asia of the Pivot’s failure.

“Many countries in Southeast Asia rested on the fact that there would be deliverables and the U.S. did not deliver,” said Welsh.

Richard McGregor, senior fellow at Australia’s Lowy Institute, told Nikkei Asia: “I think the Pivot was an extremely successful policy in theory — and most countries in the region welcomed it. In practice, less so, depending on which country you are talking about.”

McGregor said Campbell’s deep experience in the region, including in Southeast Asia, is appreciated. “But the U.S. has the same trouble now that it had under Obama, only more so. China’s economic position in the region is far greater than 10 years ago. The U.S. position, by contrast, is much weaker.

“That in turn makes the U.S. contribution to the region, and dialogue with the region, heavily reliant on the military, a realm in which Beijing is now preparing to challenge it.” 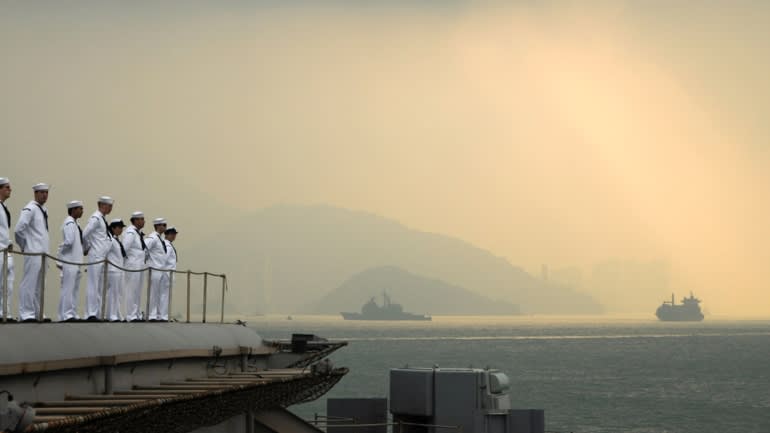 Sailors aboard the aircraft carrier USS George Washington man the rails as the ship leaves Hong Kong after port visit in 2011, during the Obama administration. Kurt Campbell returns to find China in a much stronger position.   © Reuters

On the Korean Peninsula, too, memories of the Pivot conjure up mixed feelings.

Leif-Eric Easley, professor of international studies at Ewha Womans University in Seoul, said that in South Korea “the Pivot or Rebalance is seen as a good idea that wasn’t adequately implemented.”

Indeed, allies in the region have felt increasingly caught between the U.S. and China, as the Trump administration heightened tensions with Beijing. For pricklier partners like India and Southeast Asian states, the new administration will have to make clear its Indo-Pacific strategy does not overtly oppose, exclude nor cower to China.

“We were not comfortable about [Secretary of State Mike] Pompeo’s campaign against China, which we thought was very aggressive,” said Dino Patti Djalal, a former Indonesian ambassador to the U.S. “Southeast Asia isn’t buying that. Our approach is much more a la carte.”

McGregor said the U.S. faces a “difficult balance” because many countries in the region “want to have it both ways.”

“They want a strong U.S. presence, but they are also worried that a too assertive U.S. will provoke China.”

Campbell himself recognized the need for nuance in comments published in Japanese by the Foreign Ministry’s Gaikou magazine.

“There are no clear and neatly delineated geographic lines separating a ‘Chinese bloc’ from an ‘American bloc’ as during the Cold War,” he wrote. “Most countries desire a balance between China and the United States that preserves their economic opportunity as well as their political autonomy. What is necessary is for the U.S. to be resolute and clear about the challenges posed by China and seek to summon the capacity among states to present China with a unified diplomatic position.”

While Campbell may not have to worry about South Korea’s and Japan’s commitments to the U.S. alliance, he will have to bridge the gap between the allies caused by wartime grievances and a series of Korean court rulings on compensation. A trilateral intelligence-sharing pact was put in jeopardy in 2019, and recently members of Japan’s ruling Liberal Democratic Party proposed blocking Seoul’s new ambassador to Tokyo.

“Trump didn’t concern himself much with Korea-Japan relations. [Secretary of State nominee Antony] Blinken and Campbell certainly will in order to strengthen the U.S. network of alliances,” said Easley.

And whereas the Pivot is generally seen as a good strategy that fell flat on implementation, a return of Obama’s “strategic patience” toward North Korea would not be welcome.

“The Moon administration overemphasizes the importance of Trump’s meetings with Kim Jong Un,” Easley said. “Biden will need to manage those perceptions by credibly keeping the door open for engaging Pyongyang, even while maintaining sanctions and deterrence.” Human rights, meanwhile, are expected to return as a foreign policy priority for the Biden administration, but some governments in Asia grew comfortable with Trump turning a blind eye.

“In the past, Democrats have tried to start a dialogue on Pakistan, Kashmir and human rights as well as religious freedom,” said Pankaj Kumar Jha, professor of defense and strategic studies at Jindal Global University in India. This, he continued, would not be acceptable to a Narendra Modi government “not willing to take dictation” and would lead to a U.S.-India “cold freeze.”

The first step to setting the right tone for Biden’s Indo-Pacific policy may be to show up and listen. After attending the Association of Southeast Asian Nations Summit in 2017, Trump skipped subsequent ASEAN and East Asia gatherings.

“These events are how East Asia — everywhere from Japan and the two Koreas in the north to Indonesia in the south — keeps the peace,” said Alan Chong, associate professor at Nanyang Technological University’s S. Rajaratnam School of International Studies in Singapore. “It’s exhausting to attend every one of them. But I hope President Biden will at least attend one-third of them.”

Chong argued greater attendance and attention should come with more investment. Asked what the Obama administration could have done differently, he said “they could have tried to challenge China head-on on the development front.”

“I think the moment for taking a sterner line militarily on China has passed. It passed because Trump was inattentive to Asia in general,” he said. But he stressed the U.S. is missing opportunities that could support its own economic recovery.

“If you look at critical, basic infrastructure like roads, railroads, airport construction and maintenance, harbor construction — why is Washington giving up the deals? America has expertise in all these areas. Instead it is the Chinese who are building all these things” across the region.

“I think Kurt Campbell, a veteran, can help make the case that American investment in Asia is a long-term win for the American economy.”

For now, it remains to be seen whether Biden and Campbell, ensconced in the NSC, will be seen much in Asia.

“It’s one thing to say Asia is important, America is a Pacific power,” Indonesia’s Djalal said. “But if you don’t show up, it does raise questions.”