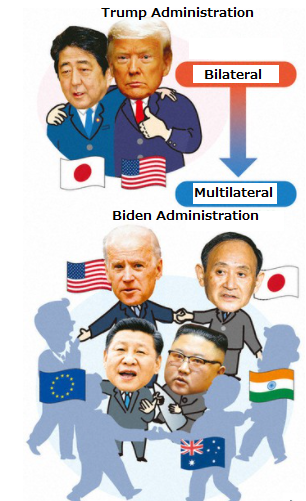 Chief Cabinet Secretary Katsunobu Kato said at a press conference on Jan. 20, “The U.S.-Japan alliance is the cornerstone of Japan’s diplomacy and security, and the foundation for peace and prosperity in the Indo-Pacific region and the international community,” indicating Japan’s policy of strengthening the bilateral relationship. The secretary emphasized that “the Japan-U.S. alliance has bipartisan support in the U.S., and Washington’s focus on Japan remains unchanged,” but deepening the bilateral relationship is an urgent issue.

During a teleconference with Prime Minister Suga after his victory in the 2020 presidential election in November, newly minted President Joe Biden reaffirmed the U.S. commitment to the defense of the Senkakus in Okinawa Prefecture, which is covered by Article 5 of the Japan-U.S. Security Treaty. The president proceeded to appoint people knowledgeable about Japan, including former Assistant Secretary of State Kurt Campbell as the White House coordinator for “Indo-Pacific” of the U.S. National Security Council (NSC). President Biden’s appointments such as this one are seen as a “sign of the importance he places on Japan,” which is threatened by China’s growing maritime presence and North Korea’s accelerating nuclear and missile development program. “The new U.S. government includes people who have close ties with the Japanese government,” said Foreign Minister Toshimitsu Motegi. “I welcome this as a sign of the importance Washington attaches to the Indo-Pacific region.”

The Biden administration’s top foreign policy priority is to improve ties with Europe and strengthen relations with various allies, which were undermined by the Trump administration. Unlike President Trump, who developed a close relationship with former Prime Minister Shinzo Abe and favored a bilateral approach, President Biden is inclined to pursue international coordination, and this could result in a decline in Japan’s presence on Washington’s radar.

Therefore, it is urgent for the Japanese government to build a closer relationship with the Biden administration. In his policy speech on Jan. 18, Prime Minister Suga declared, “I will meet with President-elect Biden at an early date to further strengthen the unity of Japan and the U.S.” At this point, however, it is undecided whether the Biden administration will accept early visits from the heads of various countries. While seeking to arrange visits to the U.S. by Prime Minister Suga and Foreign Minister Motegi, the Japanese government is considering talks over the telephone and online meetings, which are closer to face-to-face meetings.

While “top-down” policy-making by Mr. Trump was the mainstay of his administration, President Biden prefers to take a “bottom-up” approach to decision-making by carefully listening to his advisers’ counsel. It is essential to strengthen the relationship not only between the leaders and between ministers but also between MOFA and the State Department. The challenge will be to strengthen the multilayered ties with the new U.S. administration.

In response to Mr. Biden’s “multilateral emphasis,” it will be important to see how Japan can “contribute” to the president’s goal of multilateralism. It is particularly important for Japan to further strengthen ties with Australia and India, which are friends of Japan and the U.S., as well as with Europe to strengthen cooperation in the Indo-Pacific region, upon which Japan and the U.S. place great importance. Taking a leading role in international cooperation in line with the Biden administration will lead to a closer relationship between Japan and the U.S. However, there are also issues of concern such as the deteriorating relations between Japan and its neighbor, South Korea.