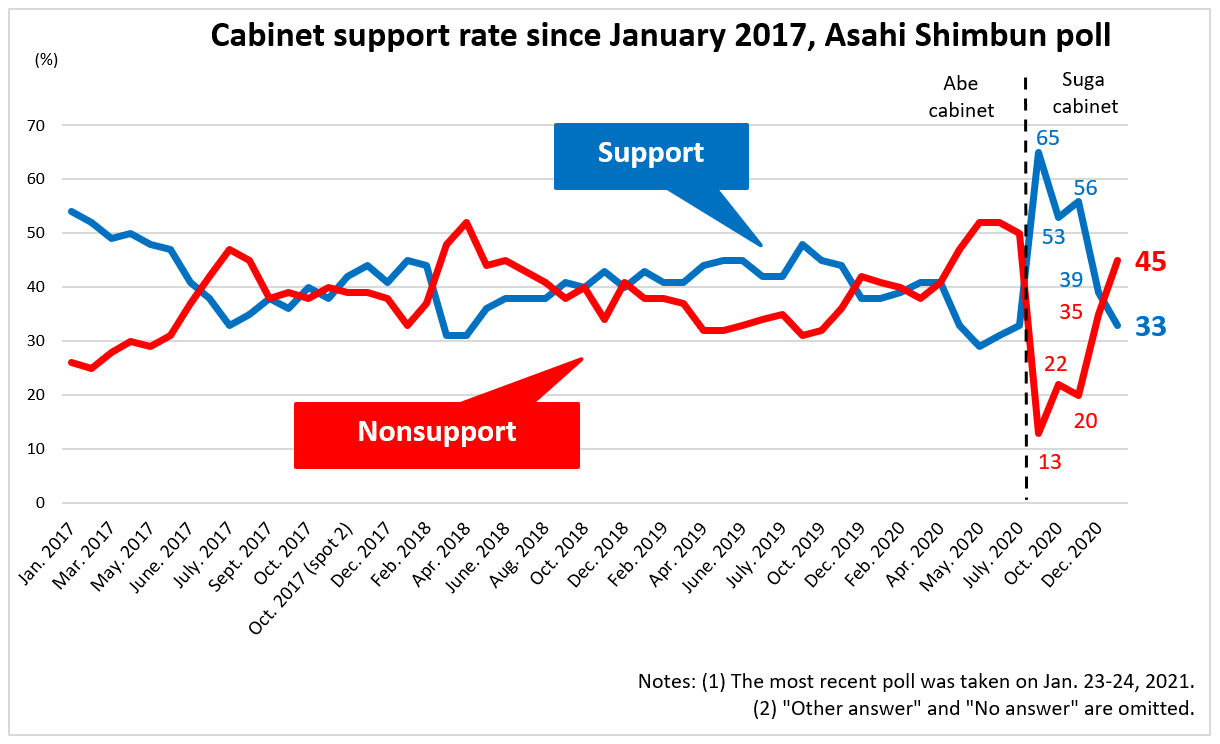 With the novel coronavirus pandemic still raging, the disapproval rating for the Cabinet rose to 45 percent apparently over the Suga government’s haphazard approach to the health crisis.

Shortly after he took office in September, an Asahi survey showed his Cabinet’s support rating at 65 percent and a disapproval rating of 13 percent.

Things quickly got worse for the Cabinet, with a December support rating of 39 percent and a disapproval rating of 35 percent.

Now, the disapproval rating has exceeded the support rating for the first time for Suga’s Cabinet.

The Jan. 23-24 telephone survey found that the approval rating declined sharply even among voters who support the ruling Liberal Democratic Party. Although the figure was 87 percent in the September survey, it was down to 65 percent in the latest poll.

The approval rating among unaffiliated voters nose-dived from 51 percent to 16 percent over the same period.

Sixty-three percent of all respondents in the latest survey gave a failing grade to the government’s approach to the novel coronavirus crisis, compared with 56 percent in the December survey.

The rate was particularly high among those who do not support the Cabinet, at 87 percent.

The ratio of voters who approved of the government response to the health crisis fell to 25 percent from 33 percent in last month’s survey.

The survey also found that 80 percent believed the government’s declaration of a state of emergency for Tokyo and 10 other prefectures earlier this month came “too late,” compared with 16 percent who thought the timing was “appropriate” and 2 percent who felt it was announced “too early.”

In addition, 54 percent of respondents believed the government’s anti-coronavirus measures centering on stay-home requests and calls for restaurants to close early were “insufficient.”

That exceeded the 34 percent who said such steps were “sufficient” and 8 percent who viewed the measures as “excessive.”

The survey also touched upon revision bills the government submitted to the Diet that could impose penalties against COVID-19 patients and businesses that do not cooperate with authorities in fighting the spread of novel coronavirus infections.

Fifty-nine percent of respondents were opposed to imposing fines of up to 500,000 yen ($4,820) against restaurants that defy authorities’ orders to reduce their business hours, compared with 29 percent in favor of the penalty.

The revisions could also lead to prison terms of up to a year or a maximum fine of 1 million yen for infected individuals who refuse to be hospitalized. Fifty percent of respondents gave the thumbs down to this punitive measure while 40 percent backed it.

The survey also showed that the approval rating for the LDP dropped by 4 points from the December survey to 34 percent, while the main opposition Constitutional Democratic Party of Japan gained 2 points for an approval rating of 7 percent.

Asahi surveys have asked respondents to choose a party that they would vote for in the proportional representation segment if the Lower House election were held now.

The ratio of those picking the LDP was 45 percent in November, 41 percent in December, and 39 percent in the latest survey.

As for the CDP, the share was 16 percent in the latest survey, compared with 12 percent in November and 14 percent in December.

Another issue increasingly being raised is whether Japan can hold the Tokyo Olympics and Paralympics, which were postponed from last year to this summer because of the pandemic.

Only 11 percent in the latest survey backed the government’s position that the event must be held this summer.

In stark contrast, 51 percent preferred a further postponement and 35 percent said the Games should be canceled.

In the December survey, the shares of the three answers were almost identical.

When limited to Tokyo residents, 42 percent favored a further delay, 39 percent supported a cancellation, and 14 percent expressed backing for holding the Olympics as rescheduled this summer.

The Tokyo Organizing Committee of the Olympic and Paralympic Games has made it clear that a further delay is not an option.

It received 632 valid responses, or 56 percent, from 1,132 fixed numbers of households with at least one eligible voter each.