TOKYO/JAKARTA — The rollout of Japan’s COVID-19 vaccination program will be a gauge of how quickly it can rebound from an economic slowdown. But it will also be a harsh reality check for one of Prime Minister Yoshihide Suga’s key policies: upgrading the country with digital technology.

Since taking office in September, Suga has outlined a number of ambitious online service policies, including the setting up of a digital agency later this year. But drafts of the vaccination scheme sent by the health ministry to local governments indicate that it will rely heavily on paper documents and manual labor.

Cities, districts and towns have been instructed to print out vaccination tickets and mail them to each resident. Upon receiving their ticket, each resident will then make a reservation via phone or, if their local government has set one up, through a website. On the day of the appointment, the individual will bring their ticket to the venue, where they will stick it onto an examination slip. After the jab, staff at the venue will send that document back to the local government, where officials will input the information into a database.

The process of selecting vendors that will print, seal and mail millions of paper documents, set up call centers and build customized websites is one reason why local authorities are scrambling to prepare to vaccinate people 65 and older in April, months behind the U.S. and major European countries.

“We are creating a scheme that meets the government’s requirements that will get us ready to start vaccinations in April,” one Tokyo district official in charge of handling vaccinations for hundreds of thousands of residents told Nikkei Asia. “But there are still some details missing [such as the format of one of the documents]. If they are not clarified soon, we might not make it.”

Japan’s paper-based approach contrasts with what some other Asian countries are doing: using mobile apps to jump-start their vaccination programs.

The Indonesian government is partnering with WhatsApp so registrations can be handled by a chatbot. It currently serves only health workers, who are the priority recipients in Indonesia’s vaccination program, launched on Jan. 13.

A doctor or nurse can simply write “vaksin” (Indonesian for “vaccine”) to a WhatsApp number provided by the health ministry, after which the chatbot will guide them through the process. It will request some personal information to determine their location and eligibility before sharing some schedules and sending a ticket with a QR code that the health workers should bring to get their vaccine shot at an appointed location.

The WhatsApp option is to accommodate target recipients who have not received an SMS invitation to get vaccinated. The health ministry also takes registrations via a website, email and a hotline.

Indonesia is targeting 1.3 million health workers across the country in the first phase of its vaccination program. China’s Sinovac produces the vaccine.

China began its vaccination program for selected groups on Dec.15, using locally produced vaccines. People in one category, those who need to travel abroad for their studies or work, can use a mobile app to register and make a vaccination appointment in their respective city. It is a four-step procedure. For example, Shanghai’s Healthy Cloud app requires the patient to insert air ticket details and state their reason for traveling before receiving two vaccine shots within a 14-day period at a community health center.

The app in the future might be used as an immunity passport for crossing from one province to another, local media reported amid new outbreaks. It will also help authorities track the inoculation’s efficacy. 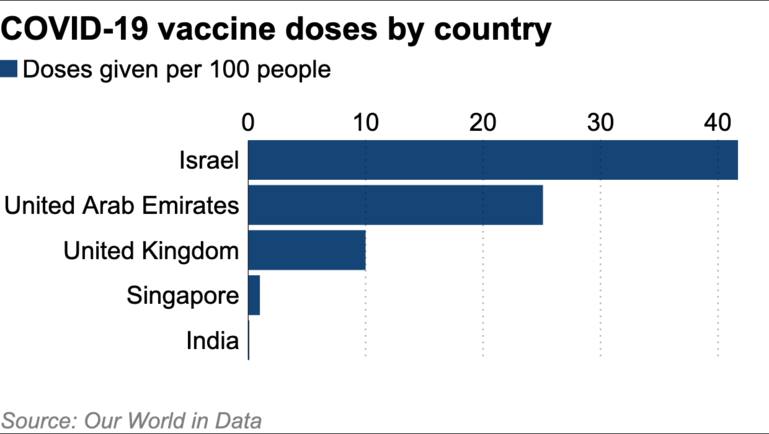 Details of when vaccinations are scheduled and of the beneficiaries, as well as information about the next dose are being digitally captured and communicated. A unique QR Code-based certificate will be generated for vaccine recipients registered on Co-Win once they have received their second shot; the certificate will act as proof they have been immunized.

“The Co-Win vaccination management system, which is made in India for the world, is a public health good,” he told reporters on Jan. 5, adding the Indian government “will proactively help the countries who may want to use it.”

India began the world’s largest vaccination drive on Jan. 16, aiming to cover 300 million of its more than 1.3 billion inhabitants by July or August. Its drug regulator earlier this month approved two vaccines for emergency use. One, developed by Oxford-AstraZeneca, is being made by Serum Institute of India under the brand name Covishield. The other, Covaxin, is a homegrown vaccine produced by Bharat Biotech. Both are two-dose vaccines to be administered 28 days apart and must be stored at temperatures from 2 C to 8 C. 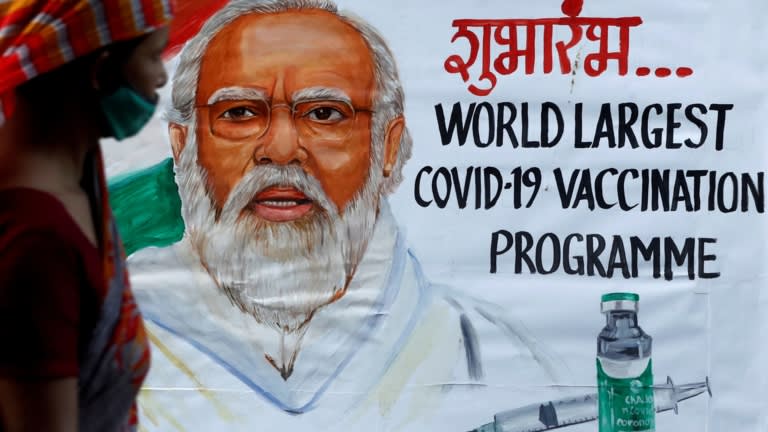 India says it “will proactively help [other] countries who may want to use” its Covid Vaccine Intelligence Network.   © Reuters

In Japan, some parts of the scheme are being digitized. The government is developing software that will allow hospitals, governments and other parties to track information about vaccine supplies. It is also considering using the My Number national identification system to keep track of the program’s progress.

Traditionally, each local government in Japan kept records of its residents, causing additional paperwork when anyone moved to another town.

Still, the large amount of paperwork that will be required for the vaccination program is unnerving city officials. The distribution of emergency cash handouts last year was slowed down by a similar crush of paperwork. Local governments had to mail out application forms, asking residents to send back a copy of their ID card.

Paperwork has stalled other economic benefits during the pandemic, such as giving subsidies to citizens that sign up for a My Number card. Residents were required to make appointments to receive their cards, resulting in long waiting lists.

A digital makeover of Japan’s paper-based procedures has been a key policy for the Suga administration. The pandemic “has highlighted various issues such as delays in the digitization of government services and the private sector,” Suga told the parliament in October. He said an upgrade of local government systems would lead to residents receiving the same level of administrative services regardless of where they live.

Falling further behind his Asian peers would be another setback for Suga, whose popularity rating has been sliding amid criticism of the government’s response to the pandemic. Missing out on a rare opportunity to bring people online may trigger fresh doubts in regard to a key agenda item.

CK Tan in Shanghai and Kiran Sharma in New Delhi contributed to this story.