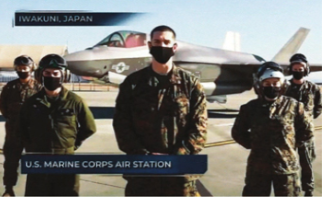 “I am stationed at the U.S. Marine Corps Air Station Iwakuni,” said one of five U.S. Marine Corps servicemen in front of a state-of-the-art F-35 fighter. “We are committed to the mission of protecting our allies, partners and the U.S. in the region.” On Jan. 20, Mr. Biden was inaugurated as the 46th U.S. President. In a 90-minute commemorative program aired simultaneously by major U.S. broadcasters that evening, the five U.S. Marines from the Iwakuni Air Base posed for a short video message. One of the Marines also said, “Our troops are committed to protecting the security, stability and freedom of the region, no matter what difficulties we face.”

The program was produced by Mr. Biden’s presidential inauguration committee. The fact that such a message was broadcast on the night of the inauguration in a festive program featuring the president and vice president as well as many Democratic-supporting singers and actors was clearly intended to impress the public at home and abroad with the new administration’s commitment to security in the Indo-Pacific region in light of the threats posed by China and North Korea.

How to deal with the increasingly hegemonic and adventurist Chinese Communist Party regime under Chinese leader Xi Jinping is one of the biggest concerns of the new Biden administration in the area of foreign policy and security.

Under the circumstances, the new administration has shown a more severe stance toward China than previous administrations. Former Central Command commander Lloyd Austin, who has been nominated to be the next Secretary of Defense, told the Senate Armed Services Committee at his nomination confirmation hearing on Jan. 19 that China “is already a regional hegemon and aims to become a major power that dominates the world,” and stressed that “the U.S. government needs to make a concerted effort” to push back that offensive.”

It is unusual for a U.S. official to declare China a “regional hegemon” in public.

On the other hand, as the new administration’s diplomacy and security team includes senior officials who supported the Obama administration, there are persistent concerns among conservatives in Japan and the U.S. about a return to the Obama era, when the administration was repeatedly criticized for its “soft diplomacy” toward China. (Abridged)