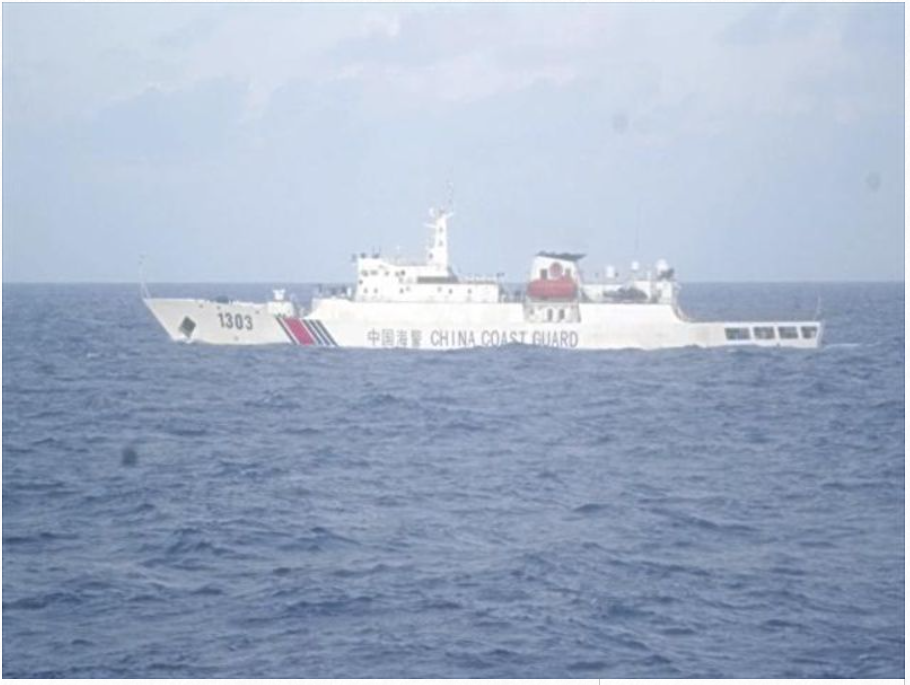 Courtesy of the Japan Coast Guard / A Chinese ship sails near the Senkaku Islands on Nov. 15.

China’s maritime police law, which allows its coast guard vessels to use weapons if the country’s sovereignty is deemed to have been infringed, comes into force Monday.

China claims sovereignty over the Senkaku Islands in Okinawa Prefecture, and might apply the law to Japan Coast Guard patrol vessels and fishing boats sailing near the islands, raising alarm among people concerned.

On the morning of Jan. 21, a day before the Standing Committee of China’s National People’s Congress passed the maritime police bill into law, Kenichi Sasaki, the 57-year-old captain of the Izena, an Ishigaki Coast Guard Office patrol vessel tasked with defending the Senkaku Islands, urged crew members to stay alert.

“China could change its actions,” Sasaki said. “Stay vigilant in order to respond to any situations that may arise.”

Last year, the China Coast Guard engaged in the provocative action of entering the contiguous zone, which is located just outside Japan’s territorial waters, on a record high of 333 days. Six vessels with newly identified numbers on their hulls have been also confirmed. The Chinese fleet usually operates in a four-ship formation.

The Izena, which is 96 meters long and weighs 1,500 tons, is equipped with a 20mm cannon. In contrast, the China Coast Guard appears to be building up its capabilities through such means as deploying large, 10,000-ton-level patrol vessels. Some of its ships are said to be equipped with 76mm cannons, which are equivalent to those of the Chinese Navy.

The maritime police law not only allows coast guard vessels to use force but also authorizes them to engage in defense missions under the command of China’s Central Military Commission.

Tasked with protecting the Senkakus, 12 vessels, including the Izena and ships of the Naha Coast Guard Office, have engaged in surveillance and other activities for the islands in rotation.

“While maintaining distance to avoid contact or other worst-case scenarios, we’re required to get as close as possible to China Coast Guard vessels to make them leave,” Sasaki said.

These already highly tense missions are likely to fray the nerves of JCG members further under the law.

“We’re scared to have weapons pointed at us, so it’ll become more difficult to approach the waters [near the islands],” said a senior official of a local fishermens cooperative, whose members’ fishing boats had been persistently followed by China Coast Guard vessels.

Last year, there were eight incidents of China Coast Guard vessels approaching Japanese fishing boats, a sharp increase from the four that occurred between 2013 and 2019 after Japan nationalized the Senkakus.

The Japanese government apparently wants to prevent a situation in which Japanese fishing boats are regularly interfered with by Chinese ships in territorial waters. If circumstances develop in which China appears to enforce the law in Japanese territorial waters, Japan’s effective control over the Senkaku Islands could be thrown into doubt.

After the administration of U.S. President Joe Biden was inaugurated on Jan. 20, Japan and the United States confirmed that the Japan-U.S. Security Treaty’s Article 5, which stipulates the obligation of joint defense in “the territories under the administration of Japan,” applied to the Senkaku Islands. This was confirmed in talks between the new U.S. president and Japan’s prime minister, and between the two nations’ defense and foreign ministers.

This repeated confirmation in a short period of time was aimed at emphasizing Japan’s effective control of the Senkakus and putting a brake on China.

Japan has accelerated efforts to strengthen the JCG’s capabilities. In February last year, three large JCG patrol ships were deployed in Okinawa and Kagoshima prefectures. In addition, the third supplementary budget approved by the Diet on Thursday includes funding for constructing one more large patrol vessel, which is scheduled to be deployed in fiscal 2023.

The JCG is responsible for the defense of Japanese territorial waters, but if a situation that the JCG cannot handle arises, the defense minister can issue a maritime security operation order after Cabinet approval to enable the Maritime Self-Defense Force to respond to it.

“I want the Defense Ministry and the Self-Defense Forces to take all possible measures to engage in warning and surveillance activities and gather information,” Defense Minister Nobuo Kishi said at a press conference on Friday. “We’ll pay close attention to the moves of the China Coast Guard.”

Some members of the Liberal Democratic Party have called for legal arrangements to strengthen cooperation between the JCG and the MSDF in response to the enforcement of the maritime police law.

Meanwhile, the Chinese Navy has a surveillance system in place behind the provocative actions by the China Coast Guard near the Senkaku Islands and other sensitive areas. In light of this, many members of the Japanese government are cautious.

“If the MSDF is mobilized against China Coast Guard vessels, it might give Beijing an excuse to dispatch its navy to the scene,” a senior Defense Ministry official said.

To avoid accidental collisions, the Defense Ministry plans to accelerate talks on setting up a hotline between SDF and Chinese Navy senior officials.