Edano vows election victory, but where will votes come from? 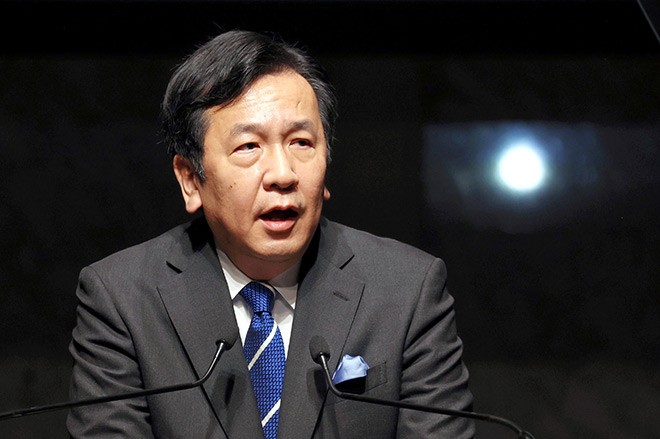 Yukio Edano, head of the Constitutional Democratic Party of Japan, gives his speech at the online party convention held at a Tokyo hotel on Jan. 31. (Pool)

Opposition leader Yukio Edano praised the successes of his party during the novel coronavirus pandemic and vowed to replace the current administration, but opinion polls show the public remains largely unimpressed.

Edano, head of the Constitutional Democratic Party of Japan (CDP), said the party was ready to run the government at the CDP’ s online convention on Jan. 31.

“We will defeat the coalition administration of the ruling Liberal Democratic Party and Komeito to form a new government led by the CDP,” Edano said from a hotel. The faces of 320 convention participants from around the nation were projected on a huge screen behind him.

This year’s convention was held online to prevent the spread of the novel coronavirus, a key topic in Edano’s speech.

He repeatedly blasted the administration of Prime Minister Yoshihide Suga over its handling of the COVID-19 crisis.

“The current explosive growth of infections and the collapse of the health care system are attributable to the failed measures of the government,” Edano said. “It is a man-made disaster.”

He continued, “What we need to do to overcome the new coronavirus is to transit power to a more trusted party.”

However, voters have shown a reluctance to trust the opposition bloc in running anything since Edano’s former party, the Democratic Party of Japan, was ousted from power in 2012.

The DPJ’s reign was marred by in-fighting and criticism over its response to the 2011 Great East Japan Earthquake, tsunami and nuclear disaster. After the LDP took over, the opposition bloc continued bickering among themselves.

And even with criticism rising over Suga’s response to the pandemic and approval rates for his Cabinet plummeting, the CDP has failed to significantly move the needle in favor of its own support ratings.

Again, the CDP will likely need cooperation from other opposition parties to defeat the LDP, yet disagreements over a possibly crucial alliance with the Japanese Communist Party (JCP) have already emerged.

At the online conference, Edano said what Japan needs is a “zero corona” policy that prioritizes the expansion of virus-testing capacities and support for medical institutions.

He also said the CDP not only criticizes the current administration but also forced the government to incorporate constructive opinions into its policies.

For example, Edano described as a “huge achievement” the LDP’s dropping of criminal penalties from legal revisions to battle the novel coronavirus on the CDP’s request.

Edano repeatedly mentioned the next Lower House election, which must be held by October.

“The CDP would like to be seen as one of the parties capable of running the government, defeat the LDP-Komeito coalition administration and form our new government,” he said.

A senior CDP lawmaker explained why Edano focused on the Lower House election at the convention.

“While the CDP has received good responses at a certain level for its anti-coronavirus measures, if he does not appeal for a change of power now, he will be considered ‘hesitant’ as the leader of the major opposition party,” the lawmaker said.

However, Edano will have to do more to change the minds of voters before that election is held.

According to surveys conducted by The Asahi Shimbun, the approval rating for the Suga administration plunged from 65 percent in September to 33 percent in January. Asked which party they would vote for in proportional-representative constituencies if a Lower House election were held now, 48 percent of respondents chose the LDP in September and 39 percent picked the ruling party in January.

The CDP, however, has failed to capitalize. Those who picked the CDP for the same question rose slightly from 12 percent in September to 16 percent in January.

The numbers show the CDP still hasn’t gained the public’s confidence that it can run the government.

The CDP’s 2021 action plan to win the next Lower House election was approved at the party convention.

The CDP aims to field 233 or more candidates, enough for a majority of Lower House seats, together with the Democratic Party for the People, the Social Democratic Party and independent lawmakers.

But success in the cooperation plan could hinge on the CDP’s relations with the JCP. The JCP and the CDP could compete head to head in more than 60 electoral districts.

The JCP has asked the CDP to accept the goal of forming an opposition coalition administration that includes JCP members in return for not fielding candidates in certain electoral districts.

However, many CDP lawmakers have expressed caution over the proposal and believe that an alliance with the JCP should be restricted to election cooperation.

(This article was written by Maho Yoshikawa and Go Kobayashi.)