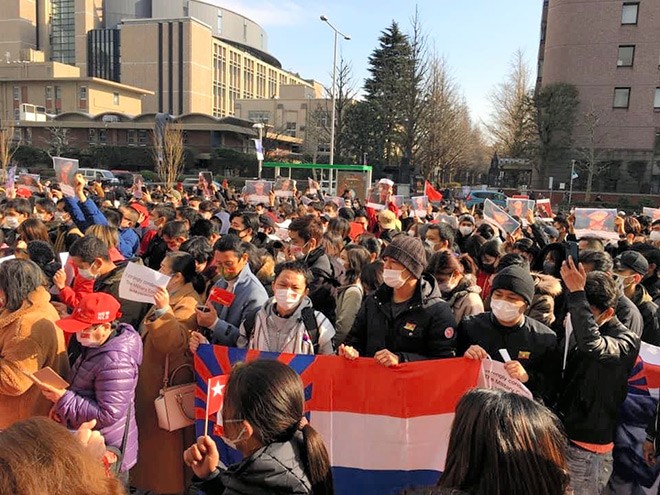 Myanmar residents in Japan protest the military coup in their homeland in front of the United Nations University in Tokyo’s Shibuya Ward on Feb. 1. (Provided by Myint Swe)

A group of about 1,000 Myanmar nationals living in Japan protested the Feb. 1 military coup in their homeland in front of the United Nations University in the capital’s Shibuya Ward that same day.

The protest drew Myanmar nationals from outside Tokyo as far as Gunma Prefecture, Nagoya and elsewhere, as well as residents of the capital, who chanted, “Give us the democracy we wish for” outside the university and slammed the coup.

The coup, which threatens to return Myanmar to a dark age when its democracy movement was severely oppressed, has sparked outrage and concern among the nation’s citizens in Japan.

Many are worried over the fate of the country’s de facto leader, State Counsellor Aung San Suu Kyi, who was reportedly detained by the military and about the coup’s effects on ethnic minority group issues.

Following the Myanmar military’s announcement that it had seized state power on Feb. 1, protesters gathered at the university at around noon, according to the Federation of Workers’ Union of the Burmese Citizen in Japan, which has been promoting the pro-democracy movement in Myanmar.

Myint Swe, chairman of the federation, handed a written statement to United Nations officials at the university urging the organization to get involved in ending the coup. It also said the federation vehemently opposed the military action to destroy the pro-democracy movement.

Myint Swe, 60, who has been involved with supporting Myanmar’s pro-democracy movement, said his dream was “to plant trees of democracies (in Myanmar) and make them take root into the ground there.”

He fled Myanmar as a stowaway to escape the military regime, arriving in Japan in 2002. Though his application for refugee status was not approved, he obtained a special residence visa and later a permanent residence visa.