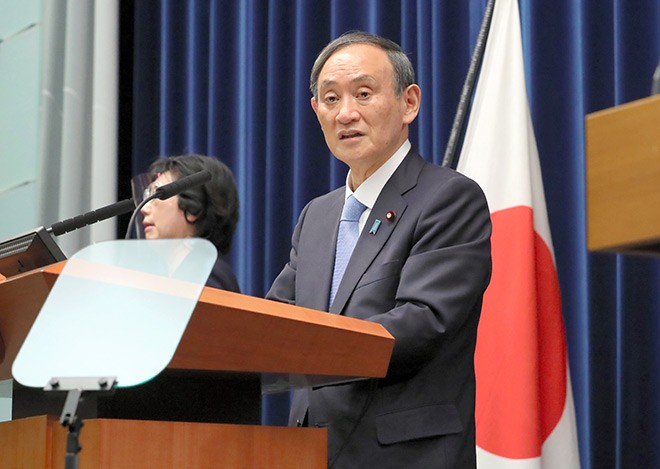 Prime Minister Yoshihide Suga explains at his Feb. 2 news conference why the state of emergency for the novel coronavirus pandemic was being extended for 10 prefectures. (Pool) 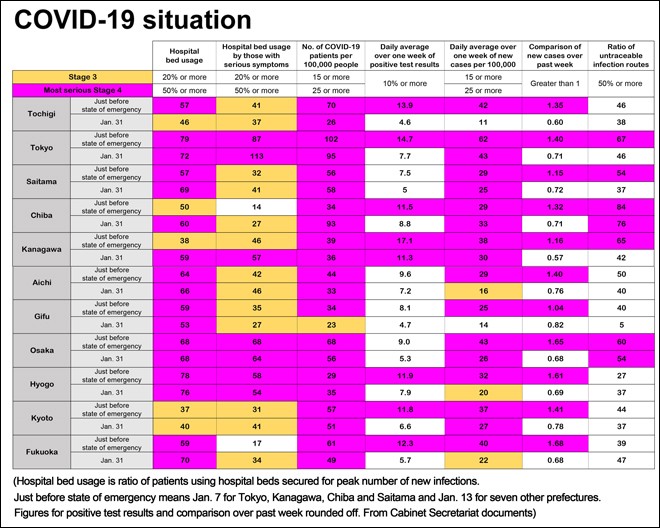 Although Prime Minister Yoshihide Suga apologized on Feb. 2 for extending the state of emergency in 10 prefectures, experts blasted his government for failing to present new measures to end the novel coronavirus crisis.

They warned that without an exit strategy and lacking specific plans to ease the strain on medical facilities, the government may be unable to lift the state of emergency by the new deadline of March 7.

During his news conference on Feb. 2, Suga apologized to the public for failing to bring the COVID-19 health crisis under control before the original state of emergency deadline of Feb. 7 for 11 prefectures.

Tochigi will be the only prefecture to have the state of emergency lifted on that day.

Suga called on businesses and the public to more thoroughly implement the measures the government has called for until now. They include shortening business hours of bars and restaurants, avoiding unnecessary outings, working from home, and limiting the number of participants at events.

The government panel of experts dealing with the novel coronavirus pandemic met on Feb. 2 to give its green light for extending the state of emergency. Panel members acknowledged that the number of infections linked to eateries has decreased, but they also expressed concern about the rising number of infection clusters at medical institutions and facilities providing care to senior citizens.

The increase of infections among elderly people who are more prone to developing serious COVID-19 symptoms and requiring hospitalization has tightened the situation at medical facilities.

The government’s basic direction to deal with the pandemic does include new measures to free up hospital beds for COVID-19 patients. One plan is to secure openings at other hospitals and nursing care facilities for patients whose condition has improved.

Shuya Nomura, a professor at the Chuo University Law School who is knowledgeable about crisis management, said the government must clarify the steps it intends to take to ease the suffering of the public.

“The government has not made a sufficient effort to increase the number of hospital beds or health care professionals,” Nomura said, referring to the strained medical care situation.

Toshiko Kikkawa, a professor of risk communications at Keio University’s Faculty of Business and Commerce, said the government was depending excessively on the capabilities of the medical care structure.

“There are no specific standards for lifting the state of emergency or a plan for the future,” she said.

She added that the government should publicize the results of its analysis regarding whether the decline in new COVID-19 cases was a result of an increasing number of people working from home or the shortening of business hours at bars and restaurants.

The data should be used to inform the public about what actions they are being asked to take, Kikkawa said.

The public has shown signs of growing weary of stay-at-home requests under the state of emergency.

According to Tokyo-based Agoop Corp., a Softbank Group subsidiary that tracks people’s movements through GPS data on their mobile phones, the number of people around major train stations decreased just after the state of emergency was declared for Tokyo and three neighboring prefectures on Jan. 7.

But there has since been a gradual increase in foot traffic in the greater Tokyo metropolitan area, according to the data.

(This article was written by Naoyuki Himeno, Yuko Matsuura and Kazuya Goto.)