Editorial: Suga must accept criticism of virus response to win back public trust 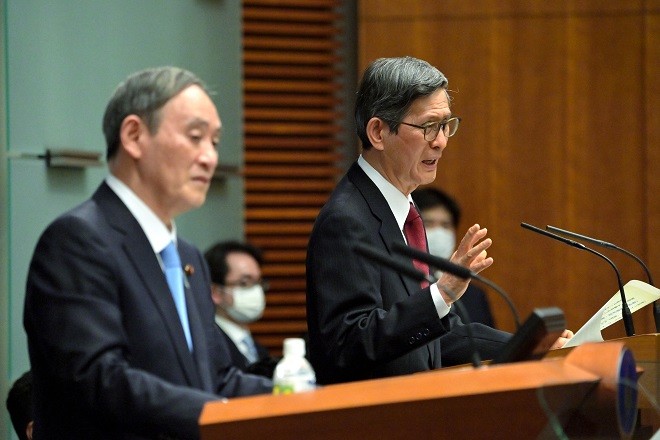 Prime Minister Yoshihide Suga, left, attends a news conference in Tokyo on Feb. 2 while Shigeru Omi, chairman of the government’s subcommittee on the novel coronavirus, speaks to reporters. (Kotaro Ebara)

Despite his earlier vow to “stop the spread of infections within one month without fail,” Prime Minister Yoshihide Suga on Feb. 2 extended the COVID-19 state of emergency until March 7 for 10 prefectures.

Initially, the state of emergency was set to expire on Feb. 7.

The government intends to “continue and thoroughly enforce” its current measures such as asking food service operators to shorten their hours. But would that be really enough for containing the virus and allowing the state of emergency to be lifted by March 7?

To obtain the public’s continued understanding and cooperation, it is vital that the government thoroughly examine its performance to date and offer a clear perspective that is firmly grounded in science.

Declared under a special measures law regarding the COVID-19 pandemic response, the current state of emergency covers 11 prefectures, of which Tochigi Prefecture alone will be excluded from the extended declaration.

Although new infection cases are definitely on the decline, the health care system remains strained and people are continuing to die while recuperating at home.

Prior to announcing the extension of the state of emergency, Suga sought the understanding of the Diet, saying that “one more push” was needed to “put an end to the spread of infections.”

But the reality was that most experts and members of the public never really believed that the state of emergency could–or should–be lifted after only one month.

What is expected of Suga now is to indicate and carefully explain new measures that have the full backing of committed medical professionals, and prove himself capable of dealing flexibly with every new development instead of holding on stubbornly to his previous decisions.

In that sense, it is troubling that subcommittee meetings of experts, which used to be held from time to discuss various issues–including reviewing the controversial Go To Travel campaign–have effectively been suspended as of late.

The latest proposals of Feb. 2, which called for revamping the state of emergency measures and enforcing them more vigorously, came only from round-robin hearings without a full-fledged subcommittee meeting. If the government is trying to ignore any ideas it doesn’t want to hear, we have a big problem.

The government appears to be considering lifting the extended state of emergency before the expiration date in regions where conditions warrant it. But the government’s thinking–that one such condition would be that the infection level declines from stage 4 (explosive surge) to stage 3 (rapid rise)–is being questioned by experts as jumping the gun.

Every year, March and April are busy months in terms of many people going to parties to mark their transfers to new jobs or schools. If infections surge as a result of the hasty easing of restrictions in hopes of reopening the economy as soon as possible, that would defeat the entire purpose.

The government must plan a scenario that can be considered optimal from a medium- to long-term perspective and also have a Plan B ready in the event that the original scenario doesn’t work. It is crucial that the government be prepared to rework its strategy as needed.

The most pressing task now is to support severely overwhelmed front-line health care facilities and personnel.

The number of patients overall is declining, but that of patients in a serious condition remains high. To save lives that can still be saved, securing additional hospital beds is a must.

A set of bills concerning COVID-19 response, which is expected to be enacted today, spells out the authority of prefectural governors to coordinate hospitalization measures over broad jurisdictions. We hope the new legislation will advance inter-hospital collaboration and the division of labor.

Dealing with more than 20,000 patients recuperating at home is another urgent task. With people continuing to die from taking sudden turns for the worse while waiting for hospital beds to become available, it is crucially important to set up a system for closely monitoring their conditions.

And with local “hokenjo” health centers remaining overwhelmed, maximum utilization must be sought of regional medical resources, including clinics and health care organizations that specialize in in-home care and nursing services.

While cluster infections at eating and drinking establishments have declined due to their shorter hours of operation, infections are surging at elderly care facilities.

Regular testing of workers at elderly care facilities was recently added to the government’s basic response policy. A fundamental overhaul of the testing system remains a grave pending issue.

And with the continuation of operational restrictions along with the extension of the state of emergency, providing additional support to businesses is another urgent task.

In the adoption of the COVID-19 response bill, the Lower House has come up with a supplementary resolution that calls for “consideration of the extent of the impact (of the bill) on businesses.”

Careful consideration is needed to ensure that business operators will feel safe to abide by government requests.

The public’s faith in politics and government is key to gaining the broad support of citizens in asking them to change their conduct to prevent the spread of the virus.

In reality, however, politicians continue to do anything but lead the public by example.

The prime minister himself came under severe criticism by getting caught partying at a steak restaurant with Liberal Democratic Party Secretary-General Toshihiro Nikai and others while asking the public to refrain from eating out.

Then, three LDP legislators and one from Komeito, the LDP’s junior coalition partner, were found to have visited posh night clubs in Tokyo’s Ginza district under the state of emergency.

Their conduct reveals their shocking disregard for the sacrifices demanded of the public by the pandemic.

In particular, the LDP’s Jun Matsumoto, a former chairman of the National Security Committee, initially lied that he had gone to the club alone, hiding the fact that he was accompanied by two junior colleagues. That was unconscionable.

The prime minister is set on introducing punitive measures for offenders of pandemic response regulations, insisting this should improve the effectiveness of the government’s policy.

But doesn’t the success of the policy hinge on people’s full understanding of the situation and willingness to cooperate?

It will not be easy to recover their lost trust.

Suga must humbly accept the widespread criticism of his typically “erratic” and “overdue” responses to the pandemic and understand that the only way to overcome the crisis is to face the public in all sincerity.