‘Biden’ brand of Japanese sake gets noticed in U.S. 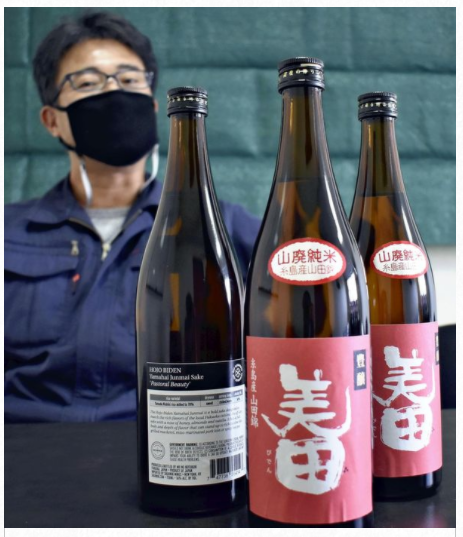 The Yomiuri Shimbun / Bottles of Hojo Biden sake, which has gained popularity in the United States

A local brand of sake produced in Tachiarai, Fukuoka Prefecture, has gained popularity in the United States, thanks to an interesting coincidence regarding the brand name and the name of the new U.S. president.

The sake, made by brewery Miinokotobuki, is named “Hojo Biden.” The Romaji spelling of the brand name — if not its pronunciation — matches the family name of Joe Biden, who was inaugurated as the new U.S. president in January.

The Hojo Biden brand is one of the brewery’s Biden series of sake. Biden, which rhymes with “key pen,” literally means beautiful rice paddies. Hojo Biden is characterized by its nicely acidic taste and rich flavor. It is a junmai sake, meaning that it is made entirely from rice, with no added alcohol.

Demand for Hojo Biden sake comes mostly from eating and drinking establishments, mainly in Tokyo. In April last year, sales of the brand plummeted 75% from the same month in the previous year due to the impact of a state of emergency to contain the coronavirus.

However, Miinokotobuki began exporting its made-in-Japan sake to the United States about 10 years ago.

Among the exported products, the shipment volume of the Hojo Biden sake in 2019 was 360 bottles. But last summer, ahead of the U.S. presidential election, a Tokyo-based export agent company told the brewery that sales of that brand of sake had suddenly increased.

In August 2020, the brewery shipped an additional 360 bottles, followed by another 480 bottles in December.

The popularity of the Hojo Biden sake has continued even after the inauguration of Biden as president, and thus the brewery is scheduled to export about 500 bottles by the end of February.

The brewery also plans to print “Biden” on labels of the bottles of sake to attract the attention of consumers in the country.

Demand for the brewery’s sake in Japan had been recovering in autumn and winter last year, only to fall again after a new state of emergency was declared in January.