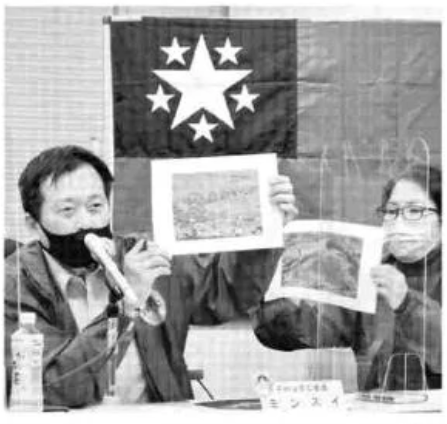 Myint Swe (left), chair of the Federation of Workers’ Union of Burmese Citizens in Japan, lodges a protest by showing examples of the harm caused by military rule (photo taken in Tokyo on Feb. 4).

On Feb. 4, the Federation of Workers’ Union of Burmese Citizens in Japan (FWUBC), a labor union for Myanmar nationals working in Japan, held a press conference in Tokyo to protest the coup launched by the military in their home country.

At the press conference, FWUBC members released a statement which says, “We strongly oppose the military’s act of violence, which tramples democracy.” They also called on the military to accept the results of the general election held in November last year and demanded the release of the senior government officials who have been detained.

FWUBC Chair Myint Swe, 60, said: “People in Myanmar will be in physical danger if they carry out demonstrations. It is important for foreign countries to raise their voices and send a message (to the people in Myanmar).”