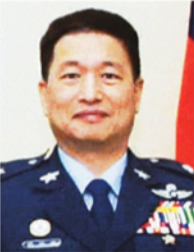 The following is an interview with Lt. Gen. Chang Yen-ting, former Taiwanese Air Force Deputy Commander, by the Sankei Shimbun, regarding the Taiwan Strait situation.

Chang: The number has sharply increased since the beginning of the second term of the administration of Tsai Ing-wen last May, with a total of 380 airplanes flying over the Strait in 2020, a record number in 30 years. There were two peaks. The first was in May, when the president was inaugurated, and the second was in September, when then-U.S. Under Secretary of State Keith Krach visited Taiwan. This clearly shows China is sending a political message. What is alarming is that more and more Chinese military aircraft are crossing the median line in the strait between Taiwan and mainland China, the de facto ceasefire line. The coastlines of Hsinchu and Miaoli, the mid-western part of Taiwan, are only a couple of minutes from the median line by military aircraft. If provocations become the norm, the time available for the Taiwanese military aircraft to respond in the event of an emergency will be limited, and the threat from the air will quickly increase.

C: Based on the analysis of the type and size of the aircraft, China had three aims. The first was to express displeasure over  inviting Taiwan’s representative to the U.S. Hsiao Bi-khim to the inauguration ceremony of President Joe Biden on Jan. 20. The 28 planes included a number of anti-ship bombers, which were also intended to send a warning to a U.S. aircraft carrier that sailed into the South China Sea. Thirdly, it was a message of intimidation to Taiwan, saying that the PRC will not relax its military pressure regardless of the change of administration in the U.S.

Q: How would China invade Taiwan?

C: We envision three possible scenarios, of small, medium and large scale. The PRC would use a police force in the first case. For example, a Chinese Coast Guard ship would ram a Taiwanese patrol boat when in the process of cracking down on illegal Chinese fishing boats. Watching the reaction of the international community, China would decide whether to escalate the situation or not.

The medium-scale invasion would involve the occupation of remote islands effectively controlled by Taiwan. The Pratas Islands in the South China Sea are at highest risk and it would be quite troublesome if the marine patrol officers in the garrison on islands were detained by the PRC.

A large-scale invasion would be a traditional landing operation on Taiwan, but it is also highly risky for China. It is hard to assume that this will happen any time soon, but it is also true that the PRC has been preparing for such an invasion for several decades. I believe that the year 2027 or thereabouts might be a critical time, as it marks the 100th anniversary of the founding of the People’s Liberation Army.

Q: Will the Biden administration change its Taiwan policy?

C: A review of the Trump administration’s policies is underway, but the Biden administration has taken over the former administration’s security policy toward Taiwan. My judgment is based on three points. The first is a series of remarks by key U.S. government officials including Secretary of State Antony Blinken and others. Secondly, the U.S. has partially halted its plans to sell arms to the Middle East, but is continuing to sell them to Taiwan. And the U.S. dispatched an aircraft carrier to the South China Sea. The flattop arrived in Guam on Jan. 16, and we postulated three scenarios for its subsequent movements: It would stay in Guam, sail to Yokosuka, or operate in the South China Sea near the Taiwan Strait. We were really relieved when the aircraft carrier entered the South China Sea. We believe this is a sign of the Biden administration’s determination to continue protecting Taiwan.