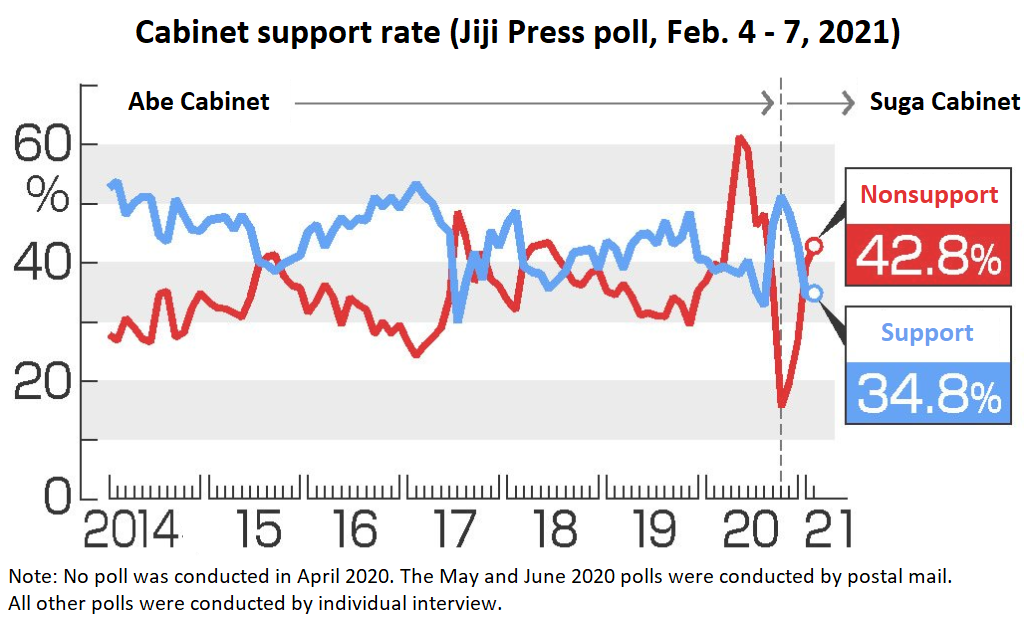 The support rate rose 0.6 point to 34.8 pct, according to the survey, conducted for four days through Sunday. Disapproval exceeded approval for the Suga cabinet, launched in September last year, for the second straight month.

On coronavirus vaccinations, expected to start for medical workers as early as Wednesday, 82.9 pct said they have expectations while 8.1 pct said they do not.

The government’s response to COVID-19 was highly rated by 27.8 pct, up 9.3 points, apparently thanks to a decrease in new infections following the introduction of a second coronavirus state of emergency last month. It was poorly rated by 51.2 pct.

Of those who disapproved the cabinet, 24.3 pct said Suga lacks leadership skills, 23.4 pct said they cannot expect anything from him, and 16.0 pct said they do not trust him.

The support rate stood at 2.1 pct for Nippon Ishin no Kai (Japan Innovation Party), 1.6 pct for the Japanese Communist Party, 0.6 pct for the Democratic Party for the People, 0.4 pct for the Social Democratic Party, 0.3 pct for Reiwa Shinsengumi and 0.2 pct for NHK Jushinryo wo Shiharawanai Hoho wo Oshieru Kai, which focuses on the issue of viewing fees for public broadcaster NHK, or Japan Broadcasting Corp.

Respondents who back no particular party accounted for 61.2 pct.