81% have high hopes for coronavirus vaccine in Japan, up 9 points, Mainichi poll 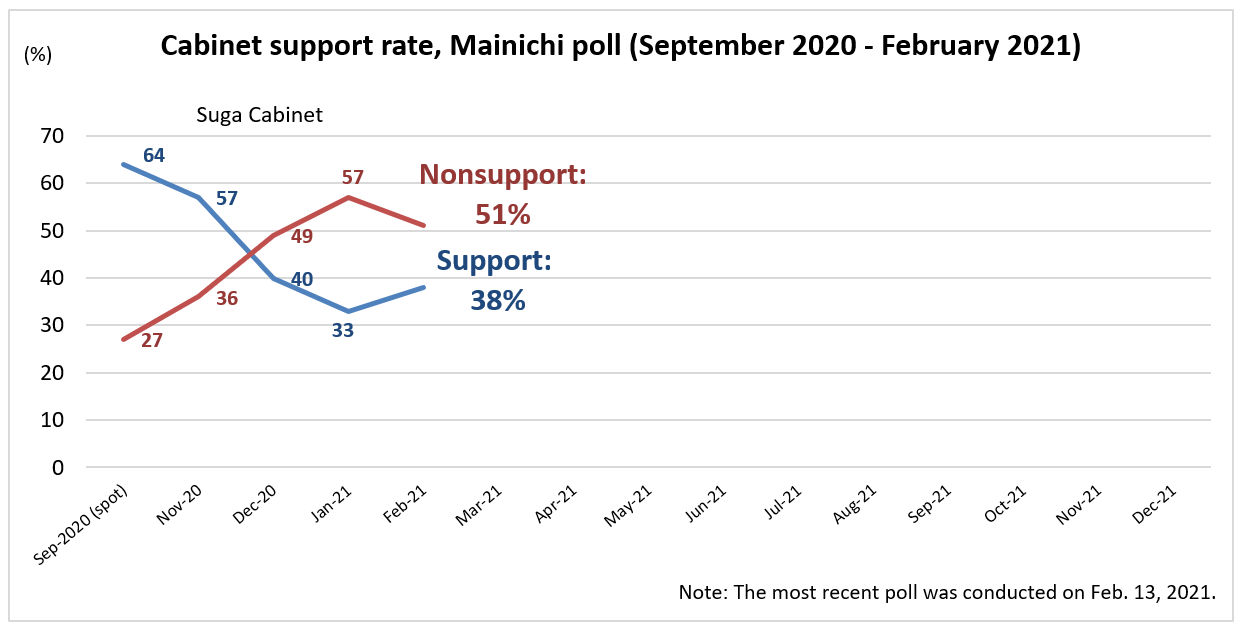 TOKYO — Eighty-one percent of people across Japan polled by the Mainichi Shimbun and the Social Survey Research Center on Feb. 13 said they have high hopes for the coronavirus vaccine, while 19% said they do not.

Those who said they were optimistic about the vaccine increased by 9 percentage points compared to the 72% who gave the same answer in a previous poll conducted on Jan. 16. In the earlier poll 28% of respondents said they viewed the vaccine negatively.

Asked whether they think that as more of the population in Japan gets vaccinated, people can return to their pre-pandemic lives, 39% of respondents said “yes,” while 60% said “no.”

Asked how they evaluate the Suga administration’s coronavirus countermeasures, 23% of respondents said they approved of them, up 8 percentage points from the previous 15%. Meanwhile, 51% responded they disapproved, falling from the 66% in the January survey. Twenty-five percent said they had no opinion either way, a 7-point increase from the previous poll.

Asked what they thought should happen to the state of emergency extended in Tokyo and nine other prefectures until March 7, 47% said it should continue until the set date, while 22% said it should be extended again.

Meanwhile, to a question asking about what they thought of Tokyo Organising Committee of the Olympic and Paralympic Games President Yoshiro Mori’s resignation over his sexist remarks, 69% responded “it’s only natural” that he stepped down, 21% said “he didn’t need to resign,” and 10% said they “don’t know.” Seventy-four percent of women and 66% of men said it was natural for Mori to resign, while 13% of women and 25% of men said he didn’t need to quit his position.

The poll was conducted through texts on mobile phones, as well as recorded questions asked through calls to landlines. There were 729 valid mobile phone responses and 313 valid landline responses.