Mayor says OK to restart of No. 3 reactor at nuke plant in Mihama 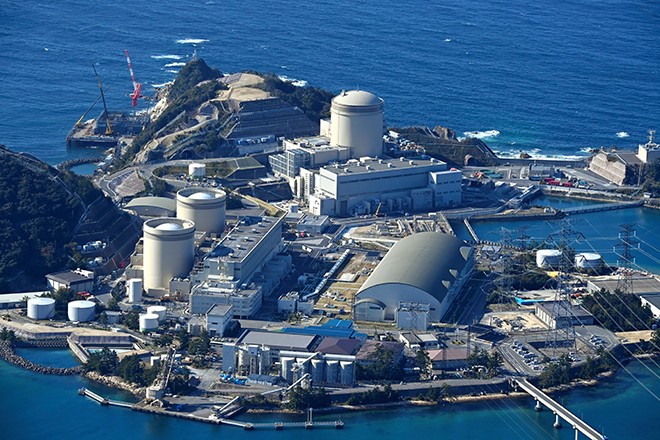 MIHAMA, Fukui Prefecture–Mayor Hideki Toshima here on Feb. 15 approved the restart of a nuclear reactor that has passed its initial 40-year life span, passing the baton on to the prefectural assembly.

The go-ahead is a key step to bring the No. 3 reactor at the Mihama nuclear plant, operated by Kansai Electric Power Co. (KEPCO), back online.

Toshima met the chairman of the town assembly that day, which approved the restart on Dec. 18. The mayor told Chairman Yoshihiro Takenaka that he agrees with the assembly’s decision。

Toshima urged KEPCO to consider contracting with local companies when construction work and operations of the plant are needed.

He also urged the central government to implement local revitalization measures for the town.

The restart will be discussed by the prefectural assembly, which is scheduled to convene from Feb. 16.

All eyes will be on whether Fukui Governor Tatsuji Sugimoto will grant approval for the reactor, which went into service in 1976.

Sugimoto has urged KEPCO to propose a site to house a temporary storage facility for spent nuclear fuel outside the prefecture as a condition for granting approval to bring the reactor back on stream.

Takashi Morimoto, president of KEPCO, visited the governor on Feb. 12 and said that the company believes it is “an option” to participate in the joint use of an interim storage facility for spent nuclear fuel in Mutsu, Aomori Prefecture.

The plan to allow all utilities that operate nuclear plants to use the facility has been proposed by the Federation of Electric Power Companies of Japan, an industry group made up of 10 major power companies.

Sugimoto said that KEPCO raised the possibility of using the Mutsu facility to help urge the prefectural assembly to discuss the restart.

However, the city of Mutsu said in a statement released on Feb. 13 that it will refuse KEPCO’s plan to use the storage facility.

KEPCO had aimed to resume operations of the No. 3 reactor at the Mihama plant in January 2021.

Even if the governor agrees to a restart, KEPCO is mandated to construct an anti-terrorism facility by October. If the company is unable to build it by the deadline, it will have to halt operations.

Toshima’s approval of the Mihama restart marks the second time that the local leader of a site where an aged nuclear power plant sits has agreed to resume operations in the past two weeks.

Takahama Mayor Yutaka Nose in the prefecture on Feb. 1 approved bringing the two Takahama nuclear plant reactors back online. He was the nation’s first local head of an area hosting nuclear reactors more than 40 years old to support their reactivation.

(This article was written by Tsunetaka Sato and Keibu Horikawa.)