Fear of deportation weighs on pregnant foreign workers in Japan

FUKUOKA, Japan — There have been disturbing reports in Japan of foreign technical interns abandoning their newborns to avoid deportation. Many of them are unaware they are protected under Japanese labor law, which prohibits the dismissal of employees due to childbirth or pregnancy.

Last November, a 21-year-old Vietnamese trainee was arrested for leaving the bodies of her baby twins in a cardboard box after giving birth in her dormitory in the town of Ashikita, Kumamoto Prefecture. “I thought I would be forced to return to Vietnam if the company found out I was pregnant,” police quoted her saying.

According to her attorney and police, the woman arrived in Japan in August 2018 to work at an orange farm in Ashikita. She sent 130,000 yen ($1,200) of her monthly earnings of 150,000 yen to her family back home. She began to display health issues last October but refused to go to the hospital as urged by her employer. As it turned out, she was pregnant. The bodies were found in her room after police were notified by the hospital that treated her when she became ill following childbirth.

In the same month, a 26-year-old Vietnamese trainee was arrested after she allegedly buried a newborn near her home in Higashihiroshima, Hiroshima Prefecture.

There have been similar cases across the country, many of which involve women who abandoned their infants out of fear of being deported. 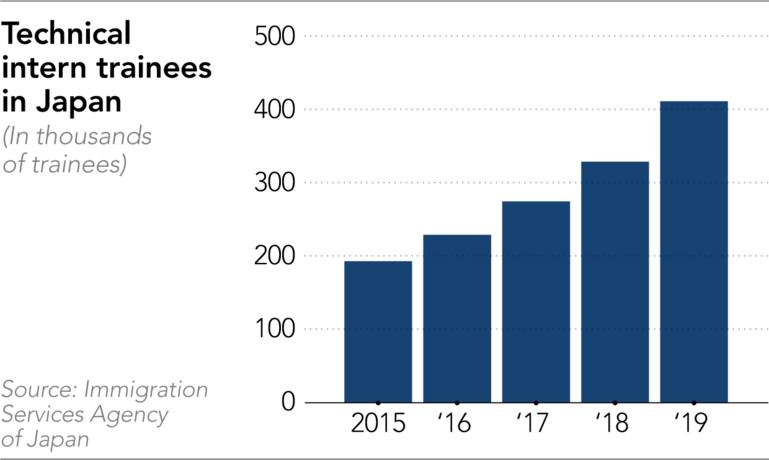 Foreign trainees are protected under Japan’s Equal Employment Opportunity Act, which prohibits employers from firing or mistreating workers over pregnancy or childbirth.

Another law enacted in 2017 regarding training and protection of technical interns also prohibits employers from “restricting freedom of trainees without due cause.” In March 2019, the Ministry of Health, Labor and Welfare issued instructions to employers of trainees and entities that supervise the program not to discharge or mistreat them due to being pregnant.

However, “Many trainees are not aware of their rights,” according to Kokushikan University professor Eriko Suzuki, an immigration policy expert.

The supervising entities are required to inform trainees of their rights but “they are not doing enough,” said Shinichiro Nakashima, head of Kumustaka, a Kumamoto-based nongovernment organization to support immigrants and other foreign workers. This official at Kumustaka helps technical interns deal with pregnancies and childbirth.

Some trainees have been “instructed to avoid getting pregnant by the organizations that send them here,” said an official at Tokyo’s Zentouitsu Workers Union, which also provides support to foreign trainees — an indication that both the sending and receiving ends of technical intern programs are responsible for keeping trainees confused. The official said the association receives about 20 inquiries about pregnancy or childbirth annually.

Meanwhile, the spread of COVID-19 could worsen interns’ predicaments as the pandemic hurts employers’ earnings. According to Japan’s labor ministry, over 5,000 technical trainees had suffered pandemic-related job losses by mid-December.

“If a pregnant trainee is in danger of losing her job, it will make her think twice about having a baby,” the Zentouitsu official said. “We may see more abortions or abandoned babies.”

“Under Japanese law, trainees are granted the right to take maternity and child care leaves as well as to receive such benefits as maternity and childbirth allowances. The government should instruct supervising agencies to explain these benefits and systems designed to support and protect foreign trainees,” Kokushikan University’s Suzuki said.

“It is important to ease trainees’ concern by actively using social media and other means to show them cases where interns keep their job after becoming pregnant or giving birth.”