Aegis Ashore alternative only available for a third of the year 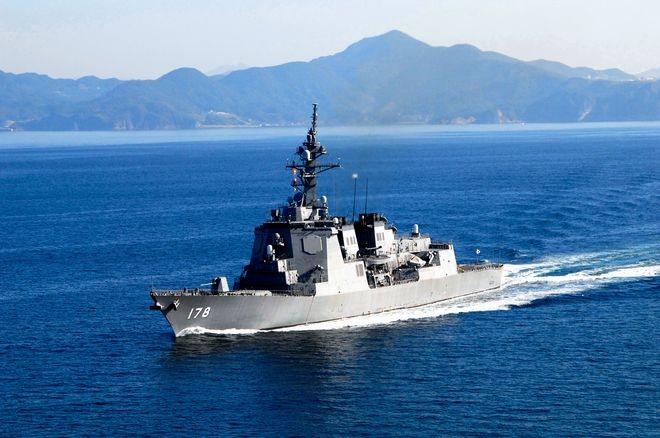 The Aegis destroyer Ashigara (Provided by the Maritime Self-Defense Force)

An undisclosed problem has emerged over the alternative for the Aegis Ashore missile defense system, and the resource strain it would cause could even hamper Japan’s other maritime operations.

Not only that, but officials knew about the project’s limited operability–only about a third of the year–and kept it from decision makers, sources said.

When government officials first proposed the land-based Aegis Ashore system, they pointed to the fact the equipment would provide 24/7 protection against ballistic missiles launched, for example, by North Korea.

But the government scratched the Aegis Ashore system in June 2020 after getting prohibitively expensive cost estimates for revising the system to ensure booster rockets do not fall on populated areas.

The decision was made in November to install the Aegis Ashore equipment on two Maritime Self-Defense Force destroyers.

It was clear there would be some drawbacks. But it now turns out those destroyers can only watch for missiles for about 126 days a year–a far cry from the 365 days originally envisioned for the Aegis Ashore.

Defense Ministry officials were aware at the time that the sea-based system would have only one-third the operability of the Aegis Ashore system, but they failed to inform lawmakers of the ruling Liberal Democratic Party about that deficiency.

In December 2020, Prime Minister Yoshihide Suga’s Cabinet approved the plan to construct two destroyers that would exclusively be outfitted with the Aegis Ashore equipment. The MSDF already has eight ships with Aegis capability.

“Many lawmakers likely did not expect such a dramatic reduction in the effect” of installing the equipment on the destroyers, a government source said.

According to government sources, Defense Ministry officials carried out various studies on the sea-based alternative. They used data provided by the United States and a major shipbuilding company that had estimated the cost for installing the Aegis Ashore components onto a ship.

Ministry officials had to consider whether the land-based equipment would work on the destroyers, what it would cost, and the number of days the destroyers could be used.

It eventually settled on 126 days a year. The rest of the year would be needed for ship maintenance and crew training. Large ships in the MSDF fleet normally require about three months for maintenance and a major overhaul once every five years.

That overhaul can last longer than six months. Crew training is also required after extended maintenance work, to get them reacclimated to the vessel.

But Defense Ministry officials did not divulge the data at the time that spelled out the estimate for how long they could be deployed.

In documents submitted to the LDP’s National Defense Division, the only indication was that installing the land-based equipment in destroyers would be less satisfactory than the Aegis Ashore system.

“They went out of their way to conceal inconvenient data,” one government source said.

But because of the need for around-the-clock surveillance on possible ballistic missile attacks, the Aegis destroyers now in the fleet would have to be used to pick up the slack when the two new destroyers are not in operation.

That means the government’s plan to bolster patrols against Chinese maritime advances would also have to be revised.

Only 1.7 billion yen ($16 million) is included in the budget proposal for fiscal 2021 for research into building the new destroyer that would have the land-based equipment installed on it.

While the ministry will work to find more ways to improve the ships’ operability, there will likely be limits to restraining costs since the contract to purchase the Aegis Ashore equipment from the United States has already been signed.