Katsuji Nakazawa is a Tokyo-based senior staff writer and editorial writer at Nikkei. He spent seven years in China as a correspondent and later as China bureau chief. He is the 2014 recipient of the Vaughn-Ueda International Journalist prize for international reporting.

On this year’s “New Year’s Eve,” Feb. 11, the long-awaited first telephone conversation between Xi and U.S. President Joe Biden took place. It had been three weeks since the American leader was sworn in, an unusually long wait.

Many people in China were jubilant in reading the official news report of the call. To them, Biden was performing a polite bainian greeting to Xi.

It was an auspicious sign on a festive evening. That night, most people were exchanging New Year’s messages on their smartphones and watching CCTV’s annual countdown program with their families.

A day later, Biden took one step further, releasing a video showing himself and his wife, Jill, sending a congratulatory message.

Although the video message was targeted primarily at Asian Americans and Pacific islanders, a member of a Chinese state-run media outlet wrote in a microblog post that the message “has been widely taken as showing [Biden’s] stance toward China.”

That was evident in the scenery. Sitting in front of a red wall, on a red sofa and leaning on red cushions, all with golden embroidery, the Bidens were enjoying the Chinese setting.

It was more colorful than the Chinese New Year’s video messages sent by former U.S. President Barack Obama, who spoke from an office or a library with the U.S. national flag in the background.

But a closer look at the Biden video reveals some blue mixed into the scenery. Biden is wearing a bluish tie, while Jill is in a blue jacket. A blue-and-white ceramic vase can be seen placed at the rear left. Blue is the color of Biden’s Democratic Party.

At first glance, the scenery is heavily red, the color of the Chinese Communist Party. But the overall composition is reminiscent of the “Blue Sky, White Sun, and a Wholly Red Earth” flag that represents the “Three Principles of the People” of Sun Yat-sen, the Chinese revolutionary leader and first president of the Republic of China, who advocated nationalism, democracy and the livelihood of the people.

The Nationalist Party of China that Sun led eventually was exiled from the mainland and became the ruling party of Taiwan.

On the flag, the blue sky with the white sun occupies the upper-left corner. In the Biden video, the blue-and-white vase fills that part of the screen. 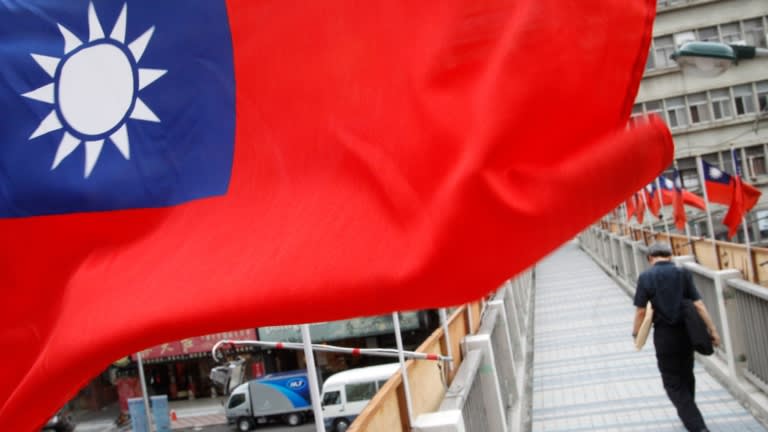 Did the flag of Taiwan serve as a model for the set Joe and Jill Biden created for their Chinese New Year’s video?   © Reuters

One could say that Biden’s New Year’s greetings were also sent to the people of Taiwan.

Did Biden send a New Year’s gift to Xi?

During their phone call, Biden condemned China’s unfair economic practices, its crackdown in Hong Kong, human rights abuses in Xinjiang and increasingly assertive actions in the region, including toward Taiwan.

But China’s official news reports did not carry Biden’s words, instead quoting Xi as saying the issues of Taiwan, Hong Kong and Xinjiang “are China’s internal affairs and concern China’s sovereignty and territorial integrity, and the U.S. side should respect China’s core interests and act prudently.”

The language is relatively restrained.

Something was more important to China: ensuring Xi received a New Year’s greeting from Biden.

With most analysts predicting the U.S.-China relationship would remain chilly despite the White House’s new occupant, the Chinese side devoted much energy to making the atmosphere of the Xi-Biden phone call as warm as possible.

The priority was to avoid burning bridges.

The Chinese side quoted Biden as telling Xi that the two countries “may work together on climate change and many other issues.” That remark by Biden was enough for Beijing as a New Year’s gift.

With that assurance given, China can now take its time exploring ways to cooperate with the U.S.

The year 2021 is an important one for China as it marks the 100th anniversary of the Chinese Communist Party’s establishment. China cannot afford to clash with the U.S. this early in the year.

If there are disagreements, China would be happy to punt them away for now.

One notable aspect of the phone call was that it lasted two hours, according to Biden’s own account. Taiwanese President Tsai Ing-wen and then President-elect Donald Trump of the U.S. in December 2016 angered China by speaking to each other by telephone.   © AP

When it comes to phone calls with new American presidents, Xi most likely wants to forget the previous one, which resulted in a diplomatic disaster.

In November 2016, shortly after Trump’s victory, Xi was quick to congratulate the president-elect.

Beijing saw Trump as a merchant, a businessman with whom it could easily make deals, as long as the price was right.

But that was wishful thinking.

On Dec. 2 that year, Trump held a historic 12-minute telephone conversation with Taiwanese President Tsai Ing-wen, an act that infuriated Beijing as a violation of the “one China” policy which the U.S. had promised to mind when the nations established diplomatic relations in 1979.

The U.S. president-elect referred to Tsai as “president” during their phone talks.

Trump also said in a Twitter post, “The President of Taiwan CALLED ME today to wish me congratulations on winning the Presidency. Thank you!”

It took until Feb. 9 of the next year for Xi to talk to Trump again. In that phone call, Trump finally confirmed the long-standing “one China” policy, acknowledging that Chinese on either side of the Taiwan Strait maintain there is but one China.

Looking back, it was also Chinese New Year that helped to bring Xi and Trump closer. Ivanka Trump and her daughter Arabella Kushner on Feb. 1, 2017, celebrate Chinese New Year at the Chinese embassy in Washington.   © Xinhua/Kyodo

On Feb. 1, 2017, Trump’s daughter Ivanka, along with her daughter Arabella Kushner, attended a reception held at the Chinese embassy in Washington to celebrate the holiday, signaling a U.S. willingness to improve ties.

That warmth, however, turned out to be short-lived.

Learning a lesson from the grave blunder China committed five years ago, Xi has come to realize how important his first telephone call with a new U.S. president is.

Although early U.S.-China talks are desirable, China knows it risks losing the initiative if it rushes into them.

A day after the phone call, a meme began circulating on Chinese social media. “Does Biden have bloody eyes? He must be jealous of China’s greatness,” it goes.

The terms “bloody eye” or “red eye” are used in China to express a sense of self-deprecating jealousy, such as in being envious of other people making more money. 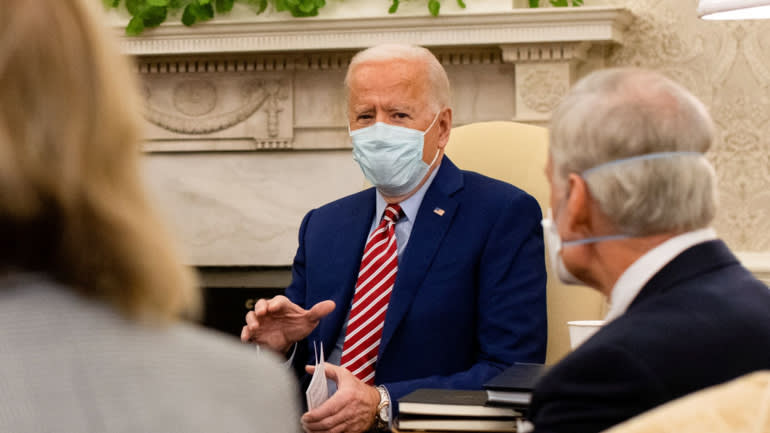 The meme stemmed from Biden’s comments in the Oval Office, where he reflected on his long conversation with Xi and said, “If we don’t get moving, they are going to eat our lunch.” He was talking about China’s aggressive infrastructure development and noting that the U.S. needs to step up in this regard.

It wasn’t long ago, in May 2019, that presidential hopeful Biden was of the opposite mind. “China is going to eat our lunch? Come on, man,” he said. “I mean, you know, they’re not bad folks, folks. But guess what? They’re not competition for us.”

In China’s eyes, it took less than two years for Biden to come around. His new stance has flattered some but rubbed others the wrong way.

Some Chinese netizens reacted angrily to Biden’s words about their country, with one saying the U.S. “has always eaten other countries’ lunch for more than 100 years.” Opined another, “We will see the twilight of (the U.S.) empire soon.”

Regardless of who eats whose lunch, the future of what Biden calls “extreme competition” between the U.S. and China has much in store.