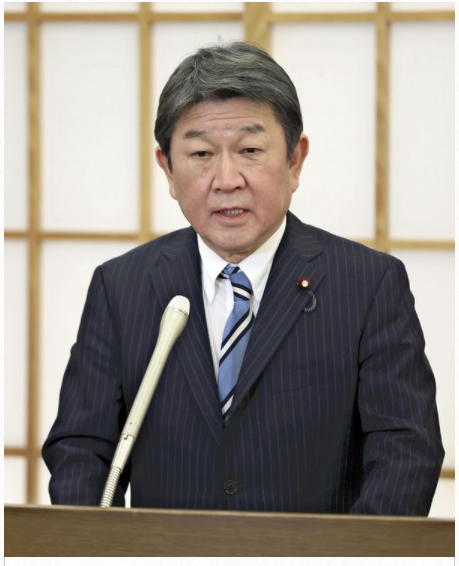 The Yomiuri Shimbun / Foreign Minister Toshimitsu Motegi answers reporters’ questions after the Japan- U.S. agreement was reached at the Foreign Ministry on Wednesday.

The Japanese and U.S. governments agreed Wednesday to extend for one year a special agreement that sets the level of the Japanese share of the cost of stationing U.S. forces in Japan. Under the agreement, Japan will pay ¥201.7 billion, the same level as this year.

The “sympathy budget” is an agreement under which Japan bears a share of the costs incurred at U.S. military facilities in Japan, such as utility fees.

The special agreement is usually reviewed every five years and the current agreement expires this fiscal year, which ends in March.

The two governments have reached a provisional agreement for the next fiscal year, as there is limited time for negotiations before the expiration of the current agreement. They also agreed to hold another round of negotiations for the remaining four years at a later date.

The two governments began formal negotiations on the sympathy budget in November. However, they failed to reach an agreement as Japan sought to maintain the same level of the burden, while then U.S. President Donald Trump demanded a large increase.

Following the inauguration of U.S. President Joe Biden in January, the negotiations were handed over to the new administration.

“We’ve succeeded in reaching an agreement at an early stage after the Biden administration took office. It has enhanced the credibility of the Japan-U.S. alliance and sends a message to the international community,” Foreign Minister Toshimitsu Motegi said on Wednesday.

The budget in the next fiscal year includes a total of ¥155.5 billion to cover labor costs for employees of welfare and other facilities, and ¥23.4 billion for utility costs such as water and electricity at U.S. military facilities. The two governments will soon sign a revised protocol on the extension of the agreement, and the Japanese government aims to have it approved by the Diet within the fiscal year.