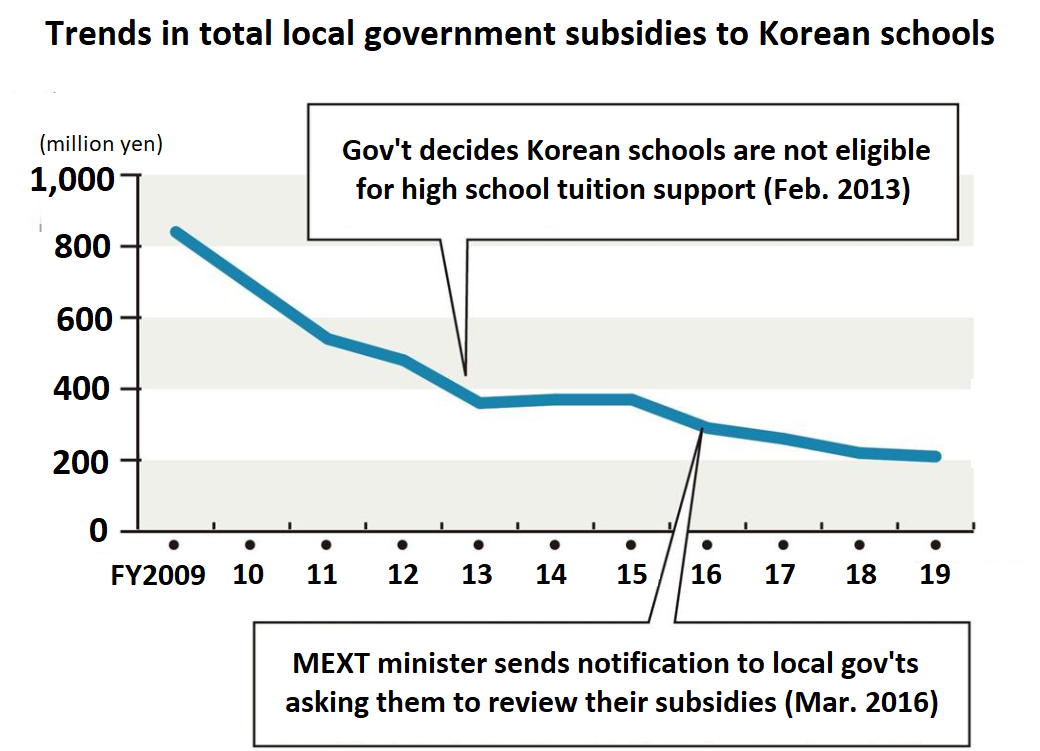 Local governments disbursed a total of 296.6 million yen in subsidies to Korean schools in Japan in fiscal 2019. This is about a quarter of the amount disbursed a decade ago. The Sankei learned this on Feb. 7 from internal documents held by the Ministry of Education, Culture, Sports, Science and Technology (MEXT).

This drop in subsidies is seen as reflecting the fact that more and more local governments are reviewing their provision of tuition subsidies for Korean schools, saying that the actual situation of these schools’ operations continues to lack transparency. There are 64 Korean schools in Japan (of which three are closed).

The subsidies differ in name and form depending on the local government. Some local governments provide the subsidy to the school as funds to cover operating expenses, while other local governments provide the subsidy to individual households as tuition support for guardians. According to internal MEXT documents, in fiscal 2019 a total of 11 prefectures paid a total of 71.11 million yen (down 2.75 million yen from the previous year) and 92 municipalities disbursed 138.49 million yen (down 5.7 million yen) in subsidies to Korean schools or to households with children attending a Korean school in their jurisdiction. The number of prefectures offering subsidies did not change from the previous year, while the number of municipalities decreased by two.

Korean schools are not certified as “schools” under the School Education Act. Prefectures have recognized them as “other schools” and independently paid them subsidies. According to MEXT statistics, local governments disbursed a total of about 840 million yen in subsidies to Korean schools in fiscal 2009, and 27 prefectures and 148 municipalities extended the subsidies.

The General Association of Korean Residents in Japan (Chongryon) has long been suspected of exerting “improper control” over Korean schools. “Improper control” is prohibited under the Basic Act on Education. Even after the administration led by the Democratic Party of Japan made high school tuition free in 2010, there were ongoing examinations of Korean schools to determine whether their high school tuition should be made free of charge through subsidies. Consideration of the matter was temporarily suspended that same year, however, due to such factors as North Korea’s bombardment of South Korea’s Yeonpyeong Island.

In the wake of the incident, questions were raised about extending subsidies to Korean schools. Soon after, in fiscal 2011, the total amount of subsidies to such schools decreased to about 540 million yen. In 2013, Korean schools were officially excluded from the list of schools eligible for funds for free high school tuition when an examination conducted under the LDP-Komeito coalition government determined that “appropriate school operation could not be confirmed.” This spurred local governments to review their expenditures, and their subsidies fell below 300 million yen in fiscal 2016.

Five lawsuits have been lodged by Korean schools nationwide, claiming that it is illegal for them to be excluded from subsidies for high school tuition. So far, the Supreme Court has decided three of the cases in favor of the state.

“Children attending Korean schools are citizens of the prefecture before they are foreigners,” says the official in charge of the subsidies at Hyogo Prefecture. “Education must be guaranteed regardless of politics,” he continues, emphasizing the need for subsidies. Hyogo disburses a total of about 41.48 million yen in subsidies for school operating expenses to six Korean schools in the prefecture (with a combined student body of about 700). The Hyogo official explains that the disbursement amount is higher than that of other local governments because “we have more children attending Korean schools than do other local governments, but the amount of subsidy per student is not in excess [of that given out by other local governments].”

Tokyo’s Arakawa Ward is among the top spenders among municipalities, disbursing about 14.04 million yen as tuition support to households that apply for assistance. The official in charge says, “The purpose is to reduce the burden on guardians. The subsidies are not intended to support Korean schools.”

Chongryon reportedly has a strong influence on the schools. In the past, there have been cases where guardians who received a subsidy gave it to the Korean school as a “donation.” Representatives of groups closely related to Chongryon are said to be active in soliciting school donations.

One of the most problematic issues regarding disbursing subsidies to Korean schools is the content of the school’s education, including textbooks. It has been pointed out that their textbooks have statements praising Kim Il Sung, Kim Jong Il, and other figures and do not mention the abductions [of Japanese nationals] by North Korea.

Since fiscal 2010, when there was debate over whether the government should deem Korean schools eligible for high school tuition support, a number of local governments, including those of Tokyo Metropolis and Osaka Prefecture, have stopped disbursing subsidies. The trend among local governments to stop disbursements gained momentum in 2016, when MEXT issued a notice requesting local governments to examine the appropriateness of the subsidies from the viewpoint of the public interest.

Tsutomu Nishioka, guest professor at Reitaku University and chairman of the National Association for the Rescue of Japanese Kidnapped by North Korea, says, “There is freedom of education, but that does not mean that Japan should give public support to schools that are deifying dictators and teaching students that Japan is using the abductions issue to stir up antiforeign sentiment.”