NEW YORK — On the day U.S. President Joe Biden made his first multilateral engagement at the Group of Seven leaders’ meeting and the special edition of the Munich Security Conference, British Prime Minister Boris Johnson talked of a new “trans-Atlantic Quad” that is emerging to address the security challenges of the times.

This echoed Biden’s own declaration that “the trans-Atlantic alliance is back” and hinted at a new direction of international relations, under which the U.S. and its European allies align their foreign policies to adapt to the new realities, including a gravitational shift toward Asia.

“Britain is working alongside France, Germany and the United States in a trans-Atlantic Quad to address the most pressing security issues, including Iran,” Johnson said in a virtual address to the Munich gathering. He had just chaired an online meeting of the G-7 from No. 10 Downing St., where the leaders pledged in a joint statement to make the year 2021 “a turning point for multilateralism.”

The trans-Atlantic Quad is Johnson’s answer to the Quadrilateral Security Dialogue between the U.S., Japan, India and Australia that looks to become one of the most important platforms to shape the Indo-Pacific strategies of like-minded democracies as they counter China’s rising influence. On Thursday, U.S. Secretary of State Antony Blinken spoke with his Quad counterparts — Japanese Foreign Minister Toshimitsu Motegi, Australian Foreign Minister Marise Payne and Indian External Affairs Minister Subrahmanyam Jaishankar — about Myanmar, the East and South China seas, North Korea, COVID-19, and climate change.

“A new world is rising up around us, patterns of trade and commerce are changing, the global center of gravity is moving eastwards, the technological revolution proceeds with blistering speed,” Johnson said. “But none of us should fear or resent these changes.” 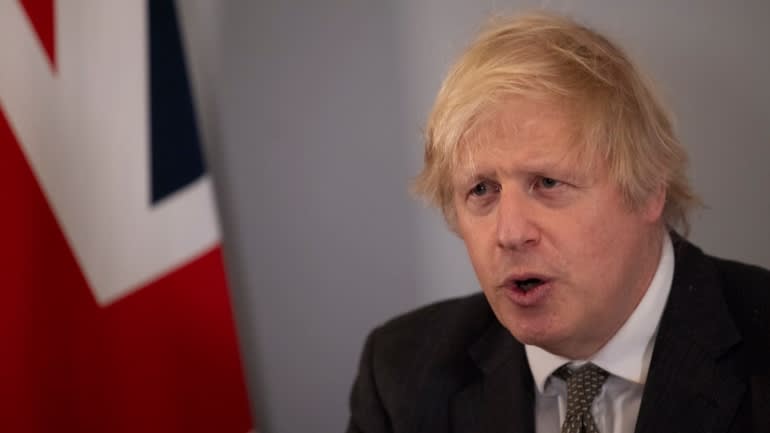 The British leader said he believes that “Europe increasingly recognizes the necessity of joining our American friends to rediscover that farsighted leadership and the spirit of adventure and trans-Atlantic unity that made our two continents great in the first place.”

His enthusiasm for strengthening the trans-Atlantic alliance, at a time when the U.K. is charting a new course for its diplomacy in the post-Brexit era, fits in comfortably for Biden and U.S. national security adviser Jake Sullivan.

Sullivan has been advising Biden to create “a position of strength” by teaming up with European allies to face the challenges posed by China and Russia.

In Friday’s speech to the Munich event, Biden said that the world is at “an inflection point” between those who argue that autocracy is the best way forward to tackle the challenges of the times — such as COVID-19, the economic crisis and climate change — and “those who understand that democracy is essential” to meeting those challenges.

Saying that the democracies must prepare for a long-term strategic competition with China, Biden said that “how the United States, Europe and Asia work together to secure the peace and defend our shared values and advance our prosperity across the Pacific will be among the most consequential efforts we undertake.”

For their part, German Chancellor Angela Merkel and French President Emmanuel Macron welcomed the return of the U.S. to multilateral diplomacy and shared concerns toward China, but in perhaps less-forceful ways. Merkel said that “in recent years, China has gained more power on the international stage, and we as trans-Atlantic partners and as democratic countries need to react to that.”

But she also noted that it is a “complex” issue, because while China is a competitor, cooperating with it could help in resolving such global issues as climate change and biodiversity.

Macron said that for decades, the U.S. within NATO had been “totally focused” on the European neighborhood but that this has changed with the rising importance of Asia. Now America says it has “become a Pacific power,” Macron said, meaning that “we must take more of the burden of our own protection.”

On actual defense policies, Biden said he had halted the planned withdrawal of American troops from Germany, one of predecessor Donald Trump’s signature moves. Biden also said he is lifting the cap imposed by the Trump administration on American forces able to be based in Germany, hinting that troop increases may be in the cards as part of the global posture review he has ordered Defense Secretary Lloyd Austin to undertake.

Johnson said that the Royal Navy’s new HMS Queen Elizabeth aircraft carrier will embark on her maiden deployment this year, sailing 20,000 nautical miles to the Indo-Pacific and back.

“On her flight deck will be a squadron of F-35 jets from the U.S. Marine Corps; among her escorts will be an American destroyer, showing how the British, American and European armed forces can operate hand in glove anywhere in the world,” he said.

Nile Gardiner, director of the Margaret Thatcher Center for Freedom at the Washington-based Heritage Foundation think tank, said: “Boris Johnson is emerging as the most powerful leader in Europe on the world stage, eclipsing Emmanuel Macron and Angela Merkel. Britain is also going to be an increasingly assertive force in the Brexit era, aggressively standing up to China and Russia.”

“It was significant that the British prime minister placed a great deal of emphasis on increased defense spending and on the launch of a second world-class aircraft carrier,” Gardiner said. “In contrast, none of the other leaders today at Munich spoke about military prowess.”

Gardiner noted that Johnson was the only world leader to specifically call out China over its treatment of the Uighurs. “Significantly, Joe Biden did not do so,” he said.

“It is Japan’s basic stance that we assert our position and demand the Chinese side to take concrete actions,” he explained.