10 years after the Great East Japan Earthquake: ‘Badge of honor’ for caretaker whose advice saved 160 children from tsunami 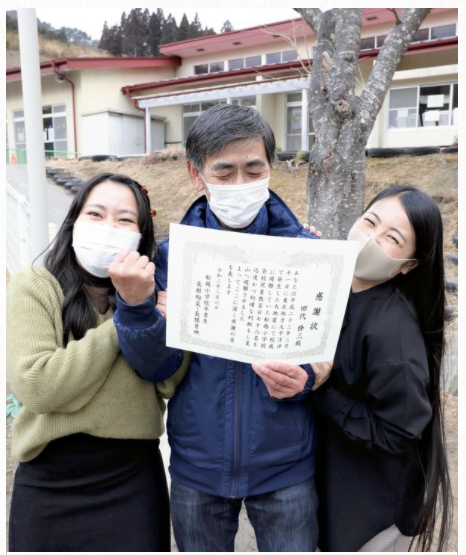 This is the second installment of a series in which Yomiuri Shimbun reporters recently revisited people affected by the Great East Japan Earthquake in March 2011 whom the newspaper interviewed at the time.

MORIOKA — For Shuzo Tashiro, a 64-year-old man from Yamada, Iwate Prefecture, a decade-old newspaper article stating “Thanks to the guidance of a school caretaker” is a “badge of honor.” In the article, Tashiro is pictured surrounded by children, all wearing huge smiles.

Funakoshi Elementary School, Tashiro’s workplace at the time, was in the path of the tsunami on March 11, 2011. Yet thanks to Tashiro’s sage advice, the lives of about 160 students were saved.

After the quake, then principal Michio Sasaki, now 63, was unsure whether he should evacuate the students gathered in the schoolyard to higher ground.

The school sat 13 meters above sea level and was a designated evacuation site by the municipality. However, the two-story school building stands between the schoolyard and the sea.

With many of the teachers hailing from inland areas, Tashiro said he always considered it his role as a local to be on the lookout for tsunami. When he walked to the seawall 200 meters away, he saw the horizon rising up.

“There’s going to be a huge tsunami,” he said after running back to the schoolyard. “People might laugh at you later, saying, ‘Why did you run away?’ But it doesn’t matter. You’d better go up.”

Though Tashiro spoke softly, principal Sasaki could feel how adamant he was and decided to evacuate everyone to the mountain behind the school.

Ayana Nagane, 22, was a sixth-grader at the time. She remembers the always-smiling Tashiro with a stern look on his face. “I could feel something terrible was happening,” she said.

Tashiro reached retirement age five years ago. After the disaster, he spent time in and around the town volunteering. He would tell people about his experience at Funakoshi Elementary School: “Don’t think that you are the only one who is OK,” and “If an earthquake happens, don’t hesitate to run away.

On that day, he was able to warn people to evacuate because of the lessons taught to him by his father, who had encountered a big tsunami during the Showa era (1926-1989).

His father had said to him many times, “Run to a higher place, even if it’s only a meter up, even if it means grabbing onto weeds and vines.” Then came his time to impart that wisdom.

In addition to volunteering, Tashiro supervises the town’s gymnasium and martial arts hall.

Whenever he meets a former Funakoshi student, they thank him. Sometimes they ask him to take a picture together.

On Feb. 6, Ayana Nagane returned from Morioka to her hometown and met Tashiro with her classmate Mebae Nagane, also 22. They surprised him with a certificate of gratitude.

It reads: “Your quick and accurate decision enabled the children to evacuate to the mountain. We want to express our gratitude.”

They had always wanted to give Tashiro something for the gratitude they felt.

He wiped his eyes and gave the same big smile they remembered from 10 years ago.

“Now I’ve got another honor,” he said.

■ ‘Thank you’ at graduation

The school’s graduation ceremony was held two weeks after the earthquake. Thirty sixth-graders holding their diplomas, including Ayana Nagane and Mebae Nagane, surrounded Shuzo Tashiro to express their thanks. “I had a gut feeling that a wall of water was coming, so I just aimed for a safe place,” he said in an article carried on March 26, 2011.