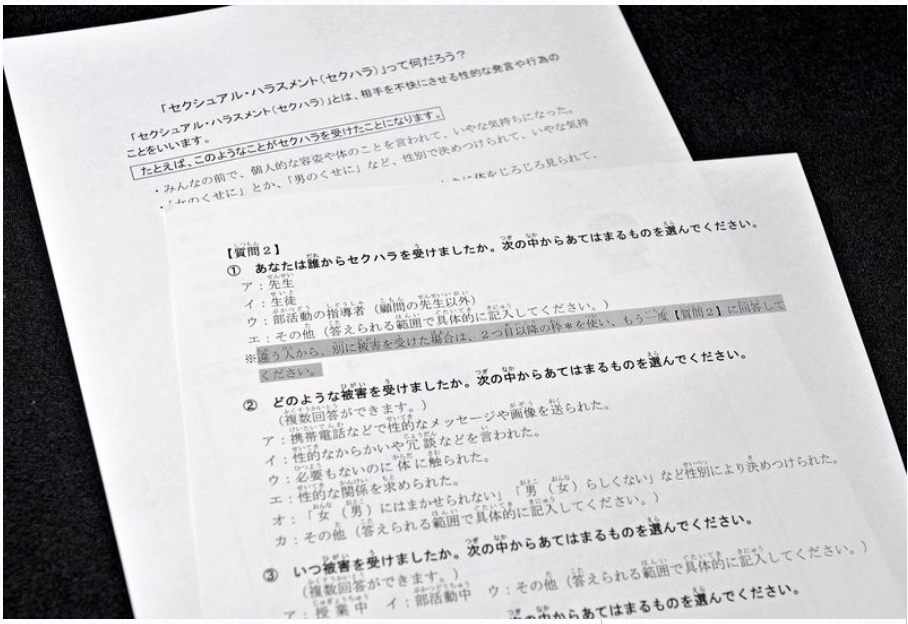 The Yomiuri Shimbun / The Kanagawa prefectural board of education’s survey to students about sexual harassment is seen.

With sexual abuse cases involving school teachers occurring one after another, more local boards of education have begun surveying students regarding sexual harassment.

The purpose of the survey is to allow students to feel safe enough to speak about their past traumas.

The surveys revealed some cases in which sexually indecent acts were committed by teachers, who were then reprimanded.

Some local boards of education also took such actions as educating students about sexual harassment, so students can identify it and recognize if they have been a victim of it.

The Yomiuri Shimbun gathered information about the issue from 67 boards of education from all prefectures, including Tokyo, and ordinance-designated cities from October to November.

Eleven other boards, including Hokkaido and Saitama Prefecture, replied they were considering conducting such a survey.

A survey conducted in the 2019 school year by the Chiba prefectural board of education revealed that a high school teacher repeatedly committed sexually indecent acts on female students by insisting he massage them. These acts took place at such locations as accommodation facilities during a school’s club excursion.

The teacher denied that he did it for sexual purposes, but the board of education deemed it inappropriate that he touched the students’ bodies, and he was dismissed as punishment.

The Kanagawa prefectural board of education also conducted a similar survey for high school students. In fiscal 2018, there were 55 complaints from students saying they were similarly victimized.

In one case, it was found that a female student was involved with a male teacher. The board of education deemed it inappropriate and dismissed the teacher in March 2019.

“Since students generally have their smartphones on them, they can easily report any incidents without being noticed,” an official of the board said.

Some boards of education have been making efforts to educate students about sexual harassment.

The Shizuoka prefectural board of education created pamphlets to explain sexual harassment before it conducted its survey on elementary and junior high school students, starting this school year.

The pamphlet explains sexual harassment as “words and actions that are sexual in nature and make the listener feel uncomfortable.” It follows it up with such practical examples as a student feeling uncomfortable with having someone touch their head or body and a student’s legs or other body parts being photographed.

Osamu Yoneda, head of Chiba Kodomo Support Net, a nonprofit organization that advises children and other young people, said: “It is a good thing that more boards of education are looking into sexual abuse cases, but there are many students who are worried about getting into trouble if they report abuse. The boards should tell the students that all reports will be handled with the utmost discretion. They should tell the parents and students exactly how and why the surveys are being conducted. It is important to emphasize that the schools will protect their students.”