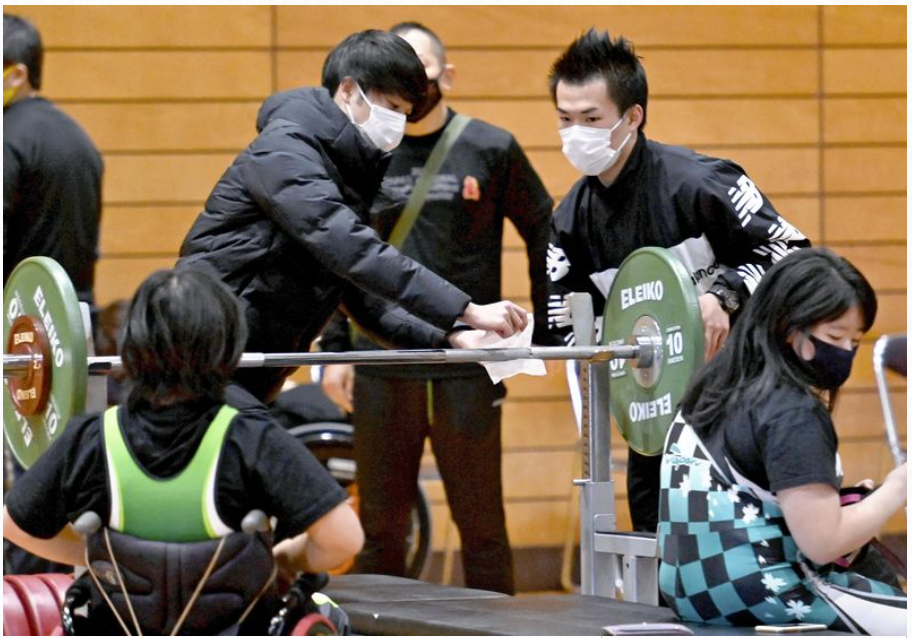 Yomiuri Shimbun file photo / Equipment is sanitized during an international competition held by the Japanese Para-Powerlifting Federation in Tokyo in January.

The Tokyo Paralympic Games are six months away and 88% of domestic sports organizations related to the Paralympics said they were concerned about the impact of the novel coronavirus pandemic on the event.

A Yomiuri Shimbun survey of 26 domestic organizations related to the 22 sports scheduled for the Tokyo Paralympic Games was conducted from early to mid-February, with all organizations responding.

Of the 26 bodies, 23 said they were concerned about the event, up by three from the previous survey conducted in August, highlighting the growing impact of the pandemic.

Asked to cite specific concerns, with multiple answers allowed, 73% of the organizations said they had concerns about the implementation of overseas trips such as to participate in international events, while 54% cited concerns in organizing competitions.

Due to the pandemic, 42% of the organizations responded that they were concerned about the implementation of the classification system, which screens the type and degree of athletes’ disabilities to decide which events they can compete in. These classifications are often assigned at international competitions.

The same percentage said they were concerned whether athletes’ motivation could be maintained.

“There are athletes who need to be classified, but since they are required to go overseas for the process, there’s no prospect of getting it done,” the Japanese Para-Swimming Federation said.

With such concerns becoming conspicuous, the Japanese Paralympic Committee and related international federations will conduct the classification for visually impaired athletes in Tochigi Prefecture in March.

“We want to make sure that athletes can compete in the Games without suffering any drawbacks,” a senior JPC official said.