All spent fuel finally removed from reactor at Fukushima plant 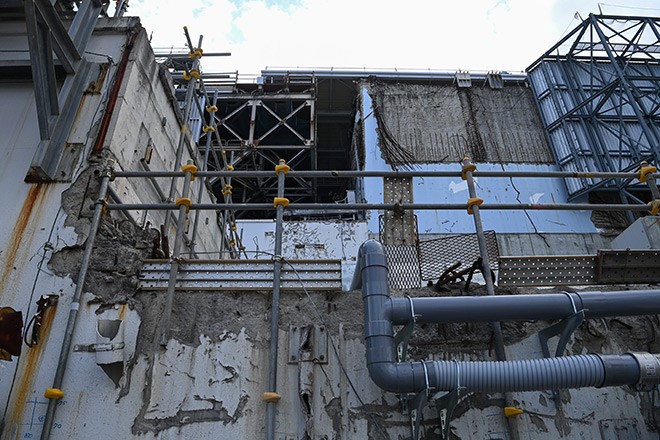 Steel frames remain exposed on the wall facing north at the No. 3 reactor building at the Fukushima No. 1 nuclear plant, showing the impact from a hydrogen explosion in March 2011. (Shinnosuke Ito)

It marked the first time for any of the storage pools at the three stricken reactors to be emptied out, and came less than two weeks before the 10th anniversary of the triple meltdown at the nuclear complex in Fukushima Prefecture northeast of Tokyo.

The two-year effort involved the removal of all the 566 spent fuel units left in the pool in the No. 3 reactor’s building.

Completion of the removal work at the No. 3 reactor building, severely damaged by a hydrogen explosion during the meltdown, eased concerns about the overall safety of the embattled plant.

The No. 3 reactor’s storage pool is situated on an upper floor of the building, posing a danger due to fears of another powerful earthquake damaging the structure and jeopardizing TEPCO’s ability to cool them.

Spent fuel needs to be kept cool as it emits high levels of radiation and decaying heat.

The utility planned to move the spent fuel from the No. 3 reactor’s pool to a shared pool for storage on the grounds of the plant to ensure the spent fuel can be safely managed.

The removal work got under way in April 2019 after rubble and other debris were cleared away. A special crane with a robotic arm was used to lift the spent fuel.

Operators worked remotely during the removal process from an operational center 500 meters away because of high radiation readings inside the reactor building.

The work was marred by a flurry of malfunctions in the equipment and the crane soon after the project got started.

The challenge was further complicated by rubble and debris in the pool that distorted the handles of some of the spent fuel units.

During the last stretch of the removal work, operators picked up the pace by working in shifts around the clock.

The remaining six units were transferred to the shared pool on Feb. 28. The development came roughly three years after the government and TEPCO announced an initial roadmap for the work in December 2011.

The removal of spent fuel from the No. 4 reactor building was completed in late 2014. The No. 4 reactor had been shut down for maintenance prior to the disaster triggered by the Great East Japan Earthquake and tsunami in 2011.

With regard to the No. 1 and No. 2 reactors, which went in meltdown after the quake and tsunami disaster knocked out cooling systems, a combined 1,000 spent fuel units remain in their storage pools.

TEPCO is aiming at starting the removal work at the two reactors in fiscal 2024 or beyond.