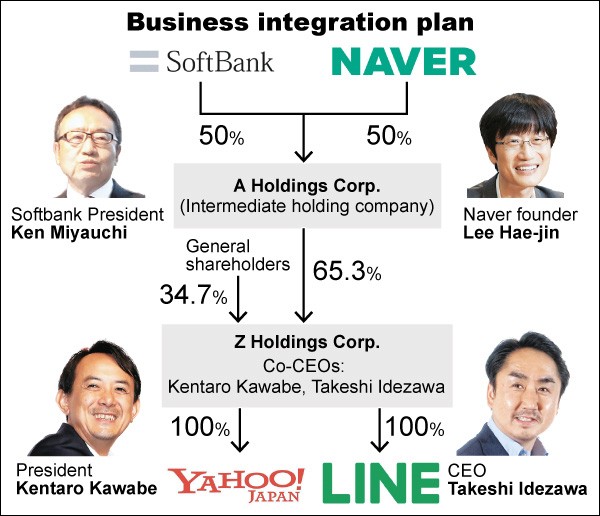 The company created by the integration of Line and Z Holdings Corp., which is owned by Softbank Corp., operator of Yahoo Japan, will provide online services to an estimated 100 million users in Japan.

The combined most recent sales of Line and Z Holdings is nearly equivalent to the roughly 1.4 trillion yen ($13 billion) earned by Rakuten Inc., one of the largest Japanese online business operators.

Softbank Corp. and Naver Corp., a South Korean IT giant and the leading shareholder of Line, each contributes 50 percent of the capital of a new intermediate holding company that owns 65.3 percent of shares of Z Holdings.

Yahoo Japan and Line have become wholly owned subsidiaries of Z Holdings, which will not be delisted.

Softbank President Ken Miyauchi will be the president of the intermediate holding company, while Lee Hae-jin, founder of Naver, will serve as the chairman. Three of the holding company’s five board members are associated with Softbank, enabling Softbank to lead the company’s management.

Some 80 million people in Japan use Yahoo Japan’s services annually, while about 86 million use Line’s free messaging app a month. The integration is aimed at creating a synergy in each company’s businesses by such means as enticing Line app users to visit Yahoo Japan’s online shopping sites.

Z Holdings plans to expand its e-commerce and financial services currently offered only in Japan to other Asian nations through Line’s overseas bases.

Through the integration, Z Holdings aims to become a “third force” that can compete against the so-called GAFA (Google, Apple, Facebook and Amazon) and Chinese tech giants, such as Baidu, Alibaba and Tencent, collectively known as BAT.

However, countries across the globe are tightening their oversight of such digital platformers’ oligopoly of the market.

A law targeting operators of online shopping sites, app stores and other digital platforms also took effect in Japan in February to create a monitoring system to prevent dominant platformers from making unreasonable demands to their client companies.

During a regulatory review of the integration, the Fair Trade Commission (FTC) last year checked to see if Z Holdings will gain a stronger monopolistic position in the market after the integration.

The results showed the company will carve out a roughly 60 percent share in the market of payment services using smartphones’ QR codes with the combined market share of Yahoo Japan’s PayPay and Line’s Line Pay.

The FTC approved the integration on the condition that Z Holdings regularly reports on its QR code payment business for three years.

The integration came five months behind schedule as the FTC’s approval procedure was partly delayed due to the COVID-19 pandemic.