NAMIE/ONAGAWA, Japan — Namie, a small town that sits about 10 km from the Fukushima Daiichi nuclear power plant, once boasted 25 fish processing companies. Today it has one.

It belongs to Koichi Shiba, 82, who was finally able to reopen his family-run fisheries business, Shibaei, last year. He thinks not many others will return to Namie.

“No one wants to come back as they built homes and got used to new lives elsewhere over the years,” Shiba told Nikkei Asia at his newly built facility.

It has been nearly 10 years since a magnitude 9.0 earthquake off Japan’s northeastern coast spawned a giant tsunami, leaving 22,000 people dead or missing, destroying 122,000 homes and causing radiation-spewing nuclear reactor meltdowns. At the peak, 470,000 residents had fled their homes. A decade later, affected areas like Namie still struggle to recover.

Fukushima Prefecture residents who lived in areas within 20 km of the nuclear plant and other areas with suspected high radiation levels — totaling up to 1,150 sq. km of land — were ordered to evacuate in 2011. As many as 160,000 people fled either within Fukushima or to other prefectures, some in distant parts of the country.

Many of the evacuation orders have been lifted, narrowing the off-limits zone around the stricken plant to 337 sq. km. But since Namie’s partial reopening in 2017, just 1,100 people out of the previous population of 21,000 have come back. Even Shiba, who inherited his family business there, almost decided to resettle permanently near Tokyo, but local officials and fishermen pleaded for him to return.

“I am doing this for the town,” he said. He may soon be joined by one other fish processing company that is also hoping to reopen. An employee sorts fish at a new facility owned by Shibaei, a fisheries processing company, in the town of Namie in Fukushima Prefecture. Getting businesses and residents to return to areas hit by the triple earthquake, tsunami and nuclear disaster has been a major challenge for authorities. (Photo by Ken Kobayashi)

In its effort to spark a renaissance, Namie set up industrial zones to be used not only for its mainstay fisheries businesses but for robotics research and a world-class hydrogen production facility. The Japanese government has poured subsidies into affected rural areas to build fancy new infrastructure and buildings to buttress the economic recovery.

Thanks to the investment influx, economic growth of the three worst-affected prefectures — Miyagi, Iwate and Fukushima — had increased more than 10% in 2017 from the pre-disaster period.

Over 30 trillion yen (about $280 billion) has been spent on regionwide reconstruction, including cleaning up debris, rebuilding infrastructure and supporting victims. Except for some areas of Fukushima that remain no-go zones, necessary construction work in the tsunami-devastated coastal areas is more or less complete. And the government plans to continue supporting the prefecture’s recovery through an expected additional 1.6 trillion yen in spending between fiscal years 2021 and 2025.

The Tohoku region was and remains a crucial area for farming, particularly rice and livestock. The region — which encompasses a large part of northeastern Japan and also includes the less affected prefectures of Aomori, Akita and Yamagata — accounted for 15.7% of Japan’s total agricultural output in 2008. It maintained a 14.9% share in 2017.

Before the disaster, it was also famous for businesses like Shiba’s, built around rich Pacific Ocean fishing grounds. And a report by the Bank of Japan’s regional branch in the city of Sendai in Miyagi Prefecture noted that its abundance of cheap land and labor made it highly attractive for manufacturers of automobiles, electronic components and semiconductors.

But even before that fateful day in 2011, Tohoku was no exception among rural Japanese regions struggling with depopulation. The number of residents was falling as more moved to cities. This has been a chronic issue since the period after World War II, when young people migrated from Japan’s countryside to find urban jobs. 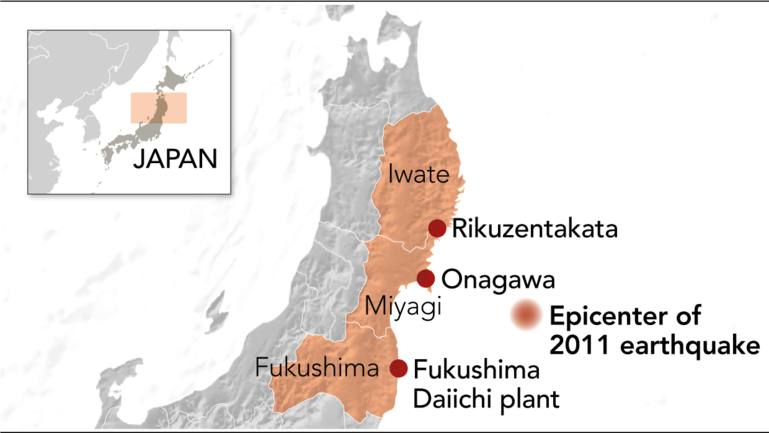 The March 11 earthquake, the largest ever recorded in Japan, compounded old challenges and created daunting new ones. Access to local fishing grounds has been limited since the nuclear accident, with boats going out just two or three days a week, though Fukushima’s fisheries cooperative association aims to resume full operations.

Now, with all that the region has been through, the coronavirus pandemic is dealing a further blow to the still fragile local economy. Shiba’s company, for example, has been hit by social distancing measures that have caused a plunge in demand for seafood in restaurants.

“I sometimes think, if only there were no coronavirus,” he said with a sigh. Despite the intimidating hurdles, Shiba and others are making a go of it.

Kyouko Tanaka reopened her store selling local food in the Fukushima town of Minamisoma in 2015, after she was forced to give up the business because her shop was located within 20 km of the Daiichi plant. Twenty people who used to supply food to her shop also died in the quake and tsunami. But Tanaka said she was determined “to hold up for at least 10 years” for the sake of those around her.

It has taken a decade for Minamisoma’s reconstruction to finally get going, she said, with neighbors trickling back into the once-deserted area. A new pharmacy near Tanaka’s shop just opened in January.

“Things are gradually being built,” she said. “This has been my dream.” 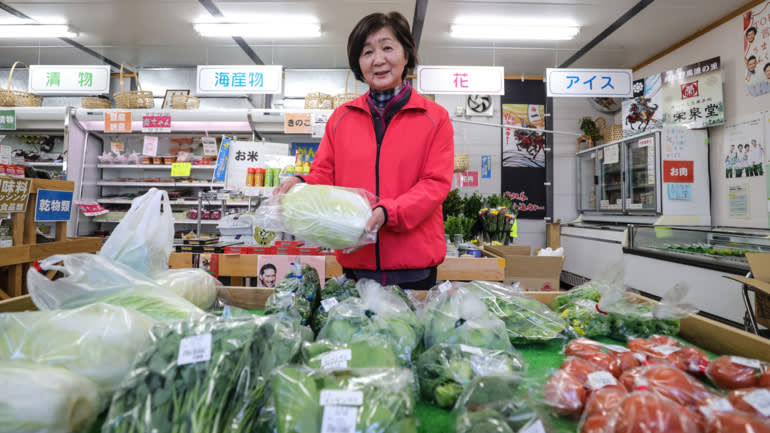 Kyouko Tanaka reopened her store selling local food in the Fukushima town of Minamisoma in 2015. “Things are gradually being built,” she said. “This has been my dream.” (Photo by Ken Kobayashi)

Tanaka thinks of her employees and customers who have been separated from their friends and traumatized by loss. “I want this to be a community,” she said of her store. She also wants to support local farmers by selling their products.

Radiation levels in Fukushima have been improving. Tanaka keeps a device in her shop to measure radioactivity. She said that Fukushima’s commercial agricultural output these days rarely exceeds 50 becquerels per kilogram, below the official limit of 100 becquerels. But, she added, wild plants — which are not sold on the market — remain unsafe to eat.

According to Masaharu Tsubokura, a professor at Fukushima Medical University, internal radiation exposure was detected in 40% of adults and 30% of children tested in 2011 in Fukushima. But “by 2012, [internal exposure] was not detected in 99.9% of children, and in 99.99% after that,” he said. 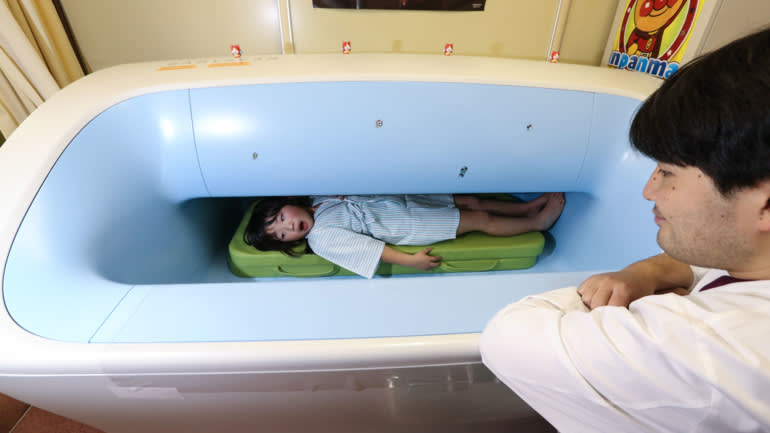 Masaharu Tsubokura, a professor at Fukushima Medical University, uses a whole-body counter to check the internal radiation exposure of a child at a hospital in MInamisoma in 2016. “By 2012, [internal exposure] was not detected in 99.9% of children, and in 99.99% after that,” he says. (Photo by Ken Kobayashi)

The positive decontamination trend, however, has not solved the population problem. The numbers remain low and continue to drop in Fukushima as well as in Miyagi and Iwate. In Rikuzentakata in Iwate Prefecture, more than 1,750 people, or about 7% of the population, were killed by the tsunami. In the 10 years since, many people gave up on rebuilding their homes, resulting in a 20% decrease in residents. Tax money has poured in to raise the community’s elevation and prevent damage from future tsunamis, yet vacant lots dot the city.

Takeshi Kanno, 71, whose house was washed away in 2011, rebuilt on the same spot in 2013 after long negotiations with the city. But when the municipality moved to redevelop the neighborhood, he was asked to scrap the home and rebuild again once the project was complete. 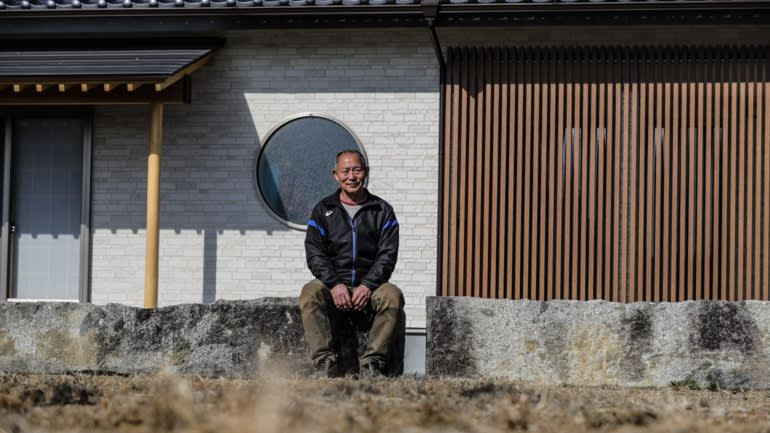 Kanno has repeatedly rebuilt his home at the same location hit by the tsunami and is determined to stay there the rest of his life. (Photo by Ken Kobayashi)

He got his latest new house last year and is determined to stay in it until the last day of his life. “Ten years was too long for me,” Kanno said. “I saw several elderly people who passed away and could not rebuild their houses while they were alive.”

He criticized the local municipality, saying: “The place has been cleaned up… but can we say that the town has been reconstructed when there is only a small number of people living here?”

In Miyagi, located between Fukushima and Iwate, the town of Onagawa has often been described as the region’s reconstruction “front-runner.” Shops and restaurants have been built along a street paved with red brick and lined with greenery, running between the train station and the seaside. A large facility for refrigerating and freezing the local fish catch was in operation by 2012 and the processing complex was later equipped with a shared water treatment plant. 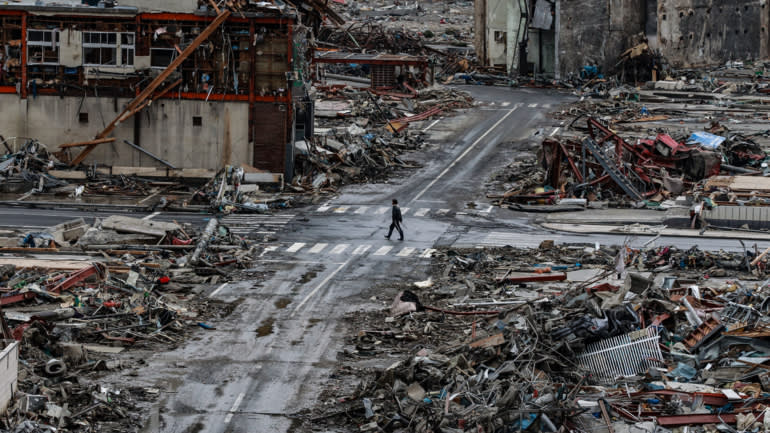 Devastation in the town of Onagawa in Miyagi Prefecture is seen on March 14, 2011, three days after the tsunami.  (Photo by Ken Kobayashi)

Membership in Onagawa’s chamber of commerce and industry decreased from the pre-disaster figure of 445 to the current 311, said Masanori Takahashi, its president. But he added that the figure has bottomed out and is gradually increasing as new businesses emerge, helped by generous local subsidies for those newly settling in.

Still, the population dropped to about 6,000 from over 10,000 before the disaster, according to town statistics. “The economy is in tatters,” said Takahashi. The coronavirus means less tourism revenue, one of the community’s economic pillars. And while reconstruction of buildings is almost complete, true recovery remains an open question.

“The rest depends on the young generation,” said the 71-year-old. A redeveloped area in Onagawa is seen on Feb. 13. The town has often been described as the region’s reconstruction “front-runner.” (Photo by Ken Kobayashi)

Amid the shock and devastation a decade ago, Japanese officials vowed to rebuild the region and have largely succeeded on a physical level. But the massive effort has illustrated the difficulty of one of the entire country’s biggest underlying challenges: achieving a sustainable rural economy.

In the long run, small and medium-sized enterprises, including companies in fisheries processing, need to flourish, said Masahiko Fujimoto, director of the Regional Innovation Research Center at Tohoku University in Sendai.

Economic activity in the disaster-hit coastal areas across Iwate and Miyagi “has been led by construction work,” he added. “There are not many incentives for people to come and do business in Tohoku.”