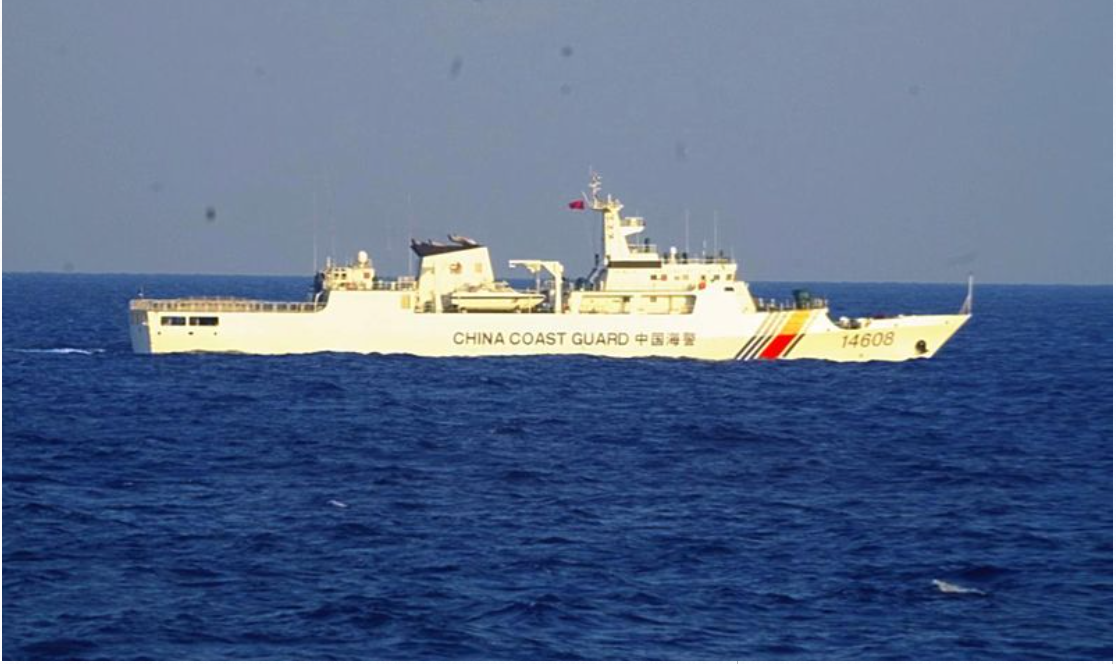 Courtesy of the 11th Regional Coast Guard Headquarters / A China Coast Guard patrol vessel, equipped with what appear to be cannons, is seen in October in Japan’s contiguous zone around the Senkaku Islands in Okinawa Prefecture.

In the one month since China put into force its coast guard law — legislation stipulating conditions for the use of weapons by its coast guard — Chinese patrol vessels increasingly intruded into Japan’s territorial waters around the Senkaku Islands in Okinawa Prefecture.

A total of 14 Chinese marine patrol vessels entered Japan’s waters from Feb. 1 to the evening of Feb. 28, according to the 11th Regional Coast Guard Headquarters based in Naha. That compares with six in January, and zero to 12 a month last year.

The Chinese patrol vessels “have been approaching Japanese fishing boats more frequently than ever,” a Japan Coast Guard official said.

There is no sign that China will stop its provocative activities in the waters around the Senkaku Islands. The Japanese government wants to put international pressure on China by convincing the world that the Chinese coast guard law is problematic under international laws.

China unilaterally claims territorial rights to the Senkaku Islands. The Chinese patrol vessels have been demanding that Japanese fishing boats leave the waters via radio and electronic bulletin boards.

China’s coast guard law grants its maritime patrol agencies the authority to force other countries’ vessels to leave its jurisdictional waters. It also stipulates that weapons can be used if China’s sovereignty or jurisdiction is violated.

“The coast guard law contains provisions that are ambiguous in terms of the applicable sea areas and problematic in terms of the authority to use weapons and consistency with international laws,” Foreign Minister Toshimitsu Motegi said at a press conference Friday, reiterating his criticism of the law.

The Japanese government is wary of a situation in which Chinese vessels claim that the area around the Senkakus is “Chinese territorial waters” and uses weapons against fishing boats and other vessels. To avoid such a situation, the Japanese government has been protesting through diplomatic channels each time there is an intrusion into its territorial waters, and has been trying to cooperate with Europe and the United States.

At a Feb. 19 teleconference of the leaders of the Group of Seven countries, in which the main topic of discussion was measures to combat the novel coronavirus, Prime Minister Yoshihide Suga deliberately raised the issue of the East and South China seas, in an effort to share awareness of the problem.

Suga’s efforts paid off, as a spokesman of the U.S. Defense Department warned against China’s provocative activities in a press conference Feb. 23.

Another sign of concern within the Japanese government and the ruling parties was the government’s legal interpretation in late February that the Japan Coast Guard and the Self-Defense Forces may be able to fire “harmful shots” that could injure the other party if a Chinese vessel approaches the Senkaku Islands for the purpose of landing there.

According to diplomatic sources, China is expected to use small boats loaded onto coast guard vessels to chase Japanese fishing boats in the future. This is because the coast guard law stipulates that other equipment and tools on site can be used.

A senior Japanese Defense Ministry official said, “If the Chinese coast guard, which is dispersed in the South China Sea, gather around the Senkakus, the Japan Coast Guard will be no match for them.”