Low-altitude flights by U.S. military helicopters over central Tokyo may be related to new Haneda routes 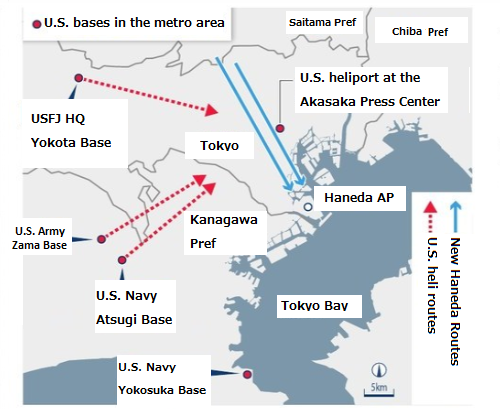 USFJ helicopters have repeatedly flown over central Tokyo at low altitudes that would be illegal if they were Japanese helicopters. Experts have pointed out, however, that the new Haneda routes for passenger airplanes in operation since last year might be a reason for the low-altitude flights. The U.S. helicopters use the helipad at the Akasaka Press Center, a U.S. military facility in Roppongi, as their base for the low-flight operations. The press center is near the new Haneda routes. The Japanese government has allowed the U.S. forces to use the helipad since the end of World War II, and the government is being questioned now for its failure to regulate U.S. military flights under Japan’s Civil Aeronautics Act.

The Civil Aeronautics Act designates the “minimum safe flight altitude” [over densely populated areas] as 300m above the top of buildings within a 600m radius of an aircraft in flight. U.S. Army helicopters were found to have flown at low altitudes 12 times, and U.S. Navy helicopters five times. These flights would have been in violation of Japanese regulations if the helicopters had been Japanese.

“The USFJ helicopters’ low-altitude flights are probably to avoid contact with passenger airplanes taking off and landing at Haneda Airport,” said Noboru Yamaguchi, a former GSDF general and helicopter pilot.

Haneda Airport routes are restricted due to the “Yokota Airspace” over Tokyo and nine prefectures, which is controlled by the U.S. Yokota Air Base (which straddles Fussa City, Tokyo, and other municipalities). To increase the number of takeoffs and landings at Haneda Airport, two new routes were added in March last year, and passenger planes now pass over the Roppongi and Shibuya areas at an altitude of about 750m. The new routes are located between the U.S. military bases in western Tokyo and Kanagawa Prefecture and the heliport in Roppongi.

“U.S. military helicopters must fly lower than passenger airplanes,” explained Yamaguchi. “The U.S. military also probably finds it necessary to conduct training so pilots can learn the terrain by actually flying over the city center at low altitudes and flying between buildings.” He added, “From a pilot’s point of view, flying at low altitudes over urban areas like Tokyo is risky. If I were flying the aircraft, I would want to fly at a high altitude if possible.” He continued, “The U.S. military’s training is very strict, though, so perhaps pilots are required to fly at very low altitudes.”

The new Haneda routes, which pass over the city center, are set for use between 3 and 7 p.m. on days with southerly winds. When the routes are in use, the airspace over the city center is designated as a “specially controlled airspace” to prevent collisions with passenger planes flying the routes. Civilian helicopters are also restricted from flying within the airspace.

Kazuhisa Ogawa, a defense analyst and specially appointed professor at the University of Shizuoka, similarly pointed out the impact of the new Haneda routes. “There is a U.S. heliport in Roppongi, so it is natural for the U.S. military to fly at low altitudes over the city center.” He explained that the transport of VIPs requires training so pilots can be ready for emergency situations. “It is unreasonable to blame the U.S. military (for the low-altitude flights) based on the fact that the U.S. military is not subject to Japan’s Civil Aeronautics Act.

Ogawa said, “The Japanese people may feel uneasy about the low-altitude flights, but the U.S. military may feel that Japan would be in trouble if a helicopter were to crash due to a lack of pilot training. He went on to say, “The Japanese government is responsible for ensuring that the Japanese people feel safe. The problem reveals that the administration is not handling the alliance in a sound manner.” The professor stressed: “If government officials in the right positions negotiate with their U.S. counterparts, it would be possible to remove the exemption of the U.S. military from the Civil Aeronautics Law and to have the  U.S. forces relocate their Roppongi helipad.” The problem is, he said, “no politician in this country is willing to do that. That is the heart of the problem.”