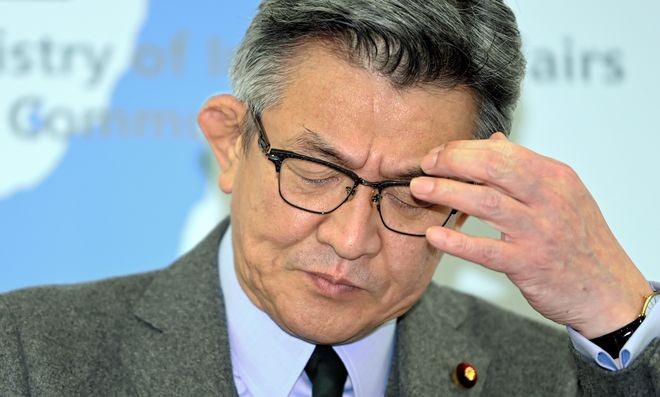 Ill health was cited as the reason for the resignation of Yamada, a former telecommunications ministry official who was treated to an expensive dinner by Tohokushinsha Film Corp.

But her involvement in the scandal made it impossible for her to continue serving as the government’s top public relations officer. Her departure came too late.

Suga clearly made a misguided decision when he allowed her to remain in her post after the revelations surfaced about how she was entertained by the firm which is, through a subsidiary, in the satellite broadcasting business. That has only widened the rift between the public and the administration over the matter.

The ministry has taken disciplinary actions, such as pay cuts, against 11 officials involved in the scandal, including Yasuhiko Taniwaki, the vice minister for policy coordination at the telecommunications ministry, the second highest-ranking bureaucrat at the ministry.

But Takeda has decided to retain most of them in their current posts, in charge of regulating the broadcast industry, which is at a crossroads.

Takeda’s decision is totally unacceptable given that their administrative responsibilities are closely related to the people’s right to know and freedom of broadcasting.

Initially, the bureaucrats entertained by Tohokushinsha said they had not been aware of eating and drinking with “stakeholders.” But the ministry’s advisory panel of experts to discuss the future of satellite broadcasting had a member representing an industry group where a Tohokushinsha official served in a senior management post.

During a panel session last autumn, the industry group official talked about the heavy burden of fixed costs that satellite broadcasters have to bear including high fees paid to the operators of broadcasting satellites and asked for measures to ease the burden.

Many of the entertained bureaucrats attended the advisory panel’s sessions, albeit at different times. Acting as the secretariat staff for the panel, they drafted a report saying the ministry should take “necessary measures” for cuts in the fees and submitted the document to the panel’s session in December.

Even if there are good reasons for reviewing the fees paid by broadcasters to satellite operators, the troubling fact remains that the draft report was written while their authors were being wined and dined by a company with an interest in policy issues discussed in the report.

It is natural for the public to doubt the fairness of policy actions and decisions linked to the panel and the report.

Takeda has promised to set up a third-party panel under the state ministers to examine any possible effects on policy decisions as a result of the extensive wining and dining. He should keep the disciplined officials from taking charge of duties related to broadcasting at least until the panel publishes its findings.

If he fails to do so, Takeda could invite the suspicion that he may have decided to allow the officials to remain in their posts because he knows panel members will conclude that their policy decisions were not influenced by the wining and dining. That could deepen public distrust of the ministry’s integrity to an irreparable extent.

The purpose of the national public services ethics law, which was enacted in 1999 in response to wining and dining scandals involving Finance Ministry officials and other elite bureaucrats, is “to ensure public trust in public services.” Takeda should remember the process leading to the establishment of the law and its spirit.

The ministry is also responsible for the important policy challenge of reforming Japan Broadcasting Corp. (NHK), the public broadcaster. NHK plans to reduce its satellite broadcasting channels, which means some frequency bands will become available for commercial broadcasters.

How they will be used is a concern for satellite broadcasters. NHK has a 50-percent stake in one broadcast satellite operator, which makes the public broadcaster a close stakeholder in the issue of whether the fees should be cut.

The Suga administration should carefully weigh allowing policy decisions with huge implications for various business concerns to be made by the very bureaucrats who received illegal treats from a company with an interest in these decisions.