In Indo-Pacific, US eyes ‘agile’ posture to dodge Chinese missiles

WASHINGTON — The U.S. will deploy its Indo-Pacific military presence far and wide rather than keep it concentrated at a handful of bases as it seeks to protect itself from China’s advanced missile capabilities.

Sensitivity toward China’s “rapid modernization” was reflected in a virtual keynote address by Navy Adm. Philip Davidson, the head of the Indo-Pacific Command, to the TechNet Indo-Pacific conference Monday.

“A historical look at the region over the past 50 years highlights the shift of our U.S. force posture as we moved out of Vietnam, Thailand and Taiwan in the 1970s and then out of the Philippines in the 1990s,” Davidson said.

“Now, we are adapting from our historic service-centric focus on Northeast Asia and Guam toward a more integrated and distributed joint force blueprint,” he said. “This includes revising our Indo-Pacific force laydown with our allies and partners to account for China’s rapid modernization.”

This new force posture must “create the virtues of mass without concentration,” he said. “This is accomplished by distributing a forward-deployed joint force across the battlespace’s breadth and depth while balancing its lethality and its survivability.”

Davidson’s remarks are in keeping with the national defense strategy laid out in 2018 under then-President Donald Trump, which calls for a transition to “smaller, dispersed, resilient, adaptive basing,” an idea now at the core of the Pentagon’s approach to China.

And it comes during a global posture review that new President Joe Biden has ordered Defense Secretary Lloyd Austin to undertake. Davidson said the objective is to create a force that is “maneuverable — agile, if you will” and has the depth of “multidomain fires” to achieve positional advantage.

Since the end of the Cold War, the U.S. military’s focus on efficiency has led to the concentration of troops at permanent bases in such locations as Yokosuka, home of the Navy’s 7th Fleet and where 12 large warships are stationed; Okinawa, where more than half of the 50,000 U.S. military personnel stationed in Japan are located; and Guam, where the Department of Defense controls 30% of all acreage on the island and approximately 11,000 military and related civilians reside, according to a 2019 report by the Congressional Research Service. 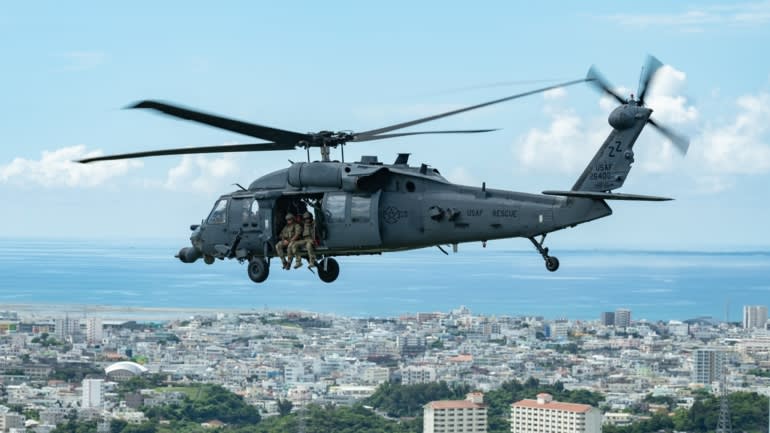 An HH-60G Pave Hawk flies during a training exercise out of Kadena Air Base in Okinawa, Japan. The U.S. military has maintained a large presence in Okinawa since the end of World War II. (Photo courtesy of the U.S. Air Force)

But a large force grouped in a single spot is vulnerable to a precision missile strike.

The prospect of wiping out a sizable chunk of American combat capabilities at once could spur a preemptive attack by Beijing if open conflict breaks out — a concern heightened by what observers see as a Chinese missile advantage in the Asia-Pacific.

The U.S. estimates that China has more than 2,000 ballistic and cruise missiles. The vast majority are short- to medium-range weapons of the sort that Washington was barred from developing or deploying under the Intermediate-Range Nuclear Forces Treaty with Russia before the U.S. withdrew from the agreement in 2019.

This has contributed to the development of the dispersal strategy, which the Marine Corps in particular is embracing with a concept known as “expeditionary advanced base operations.”

In the event of a conflict, the Marines would deploy a large number of small units to remote islands and coastal areas around the “first island chain,” within China’s missile range. These forces would deploy anti-ship missiles, anti-air defenses and maritime surveillance and reconnaissance capabilities, making it more difficult for Beijing to operate.

Work is underway on a new type of amphibious assault ship to facilitate this strategy.

While the South Pacific island nation of Palau offered last autumn to host a new U.S. military base, the Department of Defense’s focus “is on access to places from which to operate, not necessarily new permanent bases,” a department official said. The plan is to build facilities such as airfields that could accommodate troops as needed, but not a standing force.

For the dispersal strategy to succeed, “the Marine Corps will need to land in countries that may not be at war with China,” Mark Cancian, a senior adviser at the Washington-based Center for Strategic and International Studies think tank, told Nikkei.

In a conflict, countries may refuse to let American forces use their facilities for fear of being attacked by Beijing. This makes it essential to engage regularly with allies and other partners about their sense of the threat posed by China.

Recent friction in Washington’s relationship with the Philippines has introduced uncertainty into the response to Beijing’s activities in the South China Sea. The Biden administration is expected to pursue deeper cooperation with such other countries as Vietnam and Indonesia. But Southeast Asian nations swayed by China’s military and economic might will likely face pressure to avoid working with America.

Meanwhile, alarm over Beijing is only growing in Washington.

Recently implemented legislation granting broad powers to China’s quasi-military coast guard “explicitly raises the prospect of the use of force in the Indo-Pacific, and this escalation of tensions is dangerous and provocative,” Sen. Jim Risch, the top Republican on the Senate Foreign Relations Committee, told Nikkei.

“I am glad to see that President Biden increasingly views China as a serious competitor to the United States,” Risch said.

A Pentagon task force on China policy held its first meeting Monday and aims to submit recommendations to Secretary Austin by mid-June. The dispersal strategy, cooperation with allies and partners, and accelerated missile development will likely make the list.