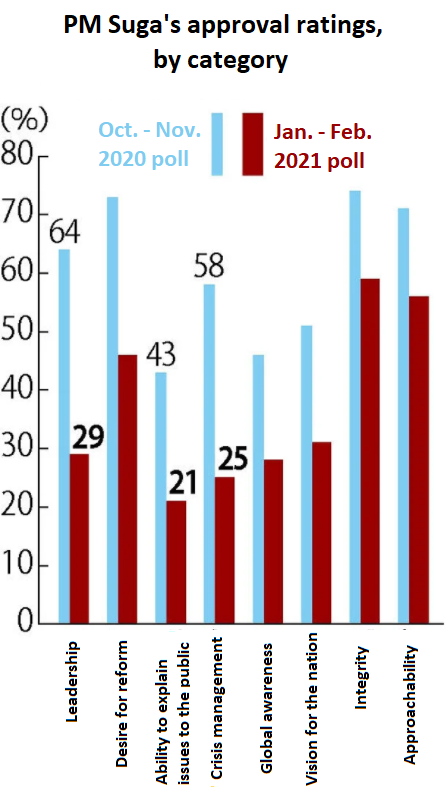 Seventy percent of respondents to a recent poll said they were interested in the Tokyo Olympics and Paralympics. The nationwide in-mail survey conducted by The Yomiuri Shimbun from January to February found that 30% were “very interested” and 40% were “somewhat interested.”

Among the 3,000 voters surveyed nationwide from Jan. 19 to Feb. 25, while a state of emergency was in effect for Tokyo, Osaka and other prefectures, 2,231 responded, a response rate of 74%.

By gender, 62% of women said they do not want the Games to be held, while 53% of men gave the same response.

As for the effects expected from holding the Games, with multiple answers permitted, the most common answer was, “It will improve the economy and employment,” chosen by 48% of respondents.

Prime Minister Yoshihide Suga’s approval ratings in three categories — leadership ability, crisis management ability and power of explanation — were found to have fallen by half since a survey conducted three months ago. Crisis management is an area in which Suga was thought to have ability, but his handling of the coronavirus pandemic and other factors have dented that image.

The same questions were used for comparison with a mail-in survey that was jointly conducted with Waseda University’s Institute for Advanced Social Sciences in October and November of 2020.

Regarding power of explanation, his approval dropped from 43% to 21%, with each of those figures being his worst showing among the eight categories that both surveys covered. Even among those who support the ruling parties, only 36% gave him positive marks in this category, down from 61% last time.

His personality brought him the most positive appraisal in the previous survey, and many respondents still evaluated it positively, although his numbers for integrity fell from 74% to 59% and those for approachability dropped from 71% to 56%.

The scandal over senior officials of the Internal Affairs and Communications Ministry being wined and dined by a broadcasting-related company that employs Suga’s eldest son is not believed to have had a major impact on the survey, as it was discovered after most of the responses were returned.

Masahisa Endo, associate professor who specializes in voting behavior at Waseda University, said: “The prime minister’s reputation depends largely on the success or failure of his response to the new coronavirus and his explanations at press conferences. If there is confusion over vaccinations, the evaluation may be even more severe.”