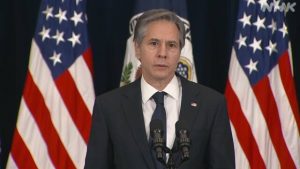 NHK reported this morning that Secretary of State Blinken delivered his first foreign policy speech at the State Department on Wednesday, during which he referred to China as “the only country with the economic, diplomatic, military, and technological power to seriously challenge the stable and open international system.” He also reportedly pointed out that the U.S.’s relationship with China is “the biggest geopolitical test of the 21st century.” The network said the Secretary stressed the need to work with allies and partners in order to “engage China from a position of strength” and stressed that the U.S. will pursue the issue of human rights in China by saying that the U.S. needs to be “standing up for our values when human rights are abused in Xinjiang or when democracy is trampled in Hong Kong.” According to the network, the Secretary mentioned that while many people at the State Department served under President Obama, “this is a different time, so our strategy and approach are different,” noting that foreign policy under the Biden administration will not simply be a continuation of that under the Obama administration. He also reportedly stressed that the U.S. will call on its allies in Asia and Europe to contribute more on the security front by saying that “real partnership means carrying burdens together.” He also reportedly stressed that the Biden administration will strive to resolve global issues through diplomacy.